CLR's Kennedy-Miles Wells Have Been Fracked And Are Starting To Produce -- June 29, 2018 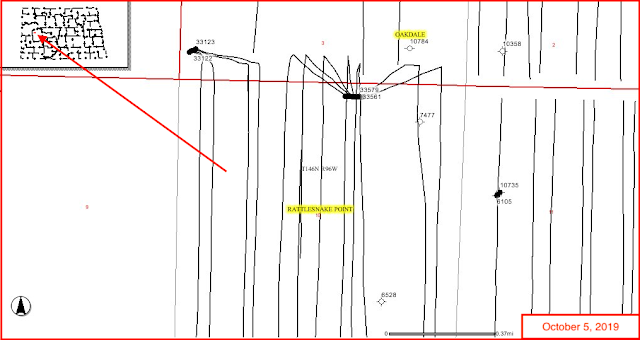 October 19, 2018: another Mountain Gap that has been reported:


August 9, 2018 (update on future dates): all these Mountain Gap wells have been completed and are starting to produce, but they are still on the confidential list -- the Rattlesnake Point wells are tracked here.

Disclaimer: it should be noted, I have been "snookered" on at least one occasion in the past when we thought we had a staggering record monthly production number only to find it was a typo by the NDIC. So, I'm waiting for the data once these wells come off the confidential before I get too excited.

Before getting to the subject of this post, look at these incredible wells CLR will be reporting, (for more on these wells, see this post):

See note below. Now we have the data for the well in question:

Now the reason for this post.
FracFocus screenshots for these two wells down below.
Now, before you look at the FracFocus graphics: I have never, never, ever, ever seen an obvious typographical error posted by FracFocus.
The production numbers above are apparently correct; a reader verified that his royalty pay stubs confirms this production. So, 99.99999% sure there is no typo above but the NDIC has been known to make errors. But if the pay stubs reflect this production ...
And as noted, I have never seen FracFocus make an obvious typographic error.

If the FracFocus data is correct, then what are we to make of the production numbers of one of the wells above?

Here are the screenshots of the FracFocus data for these two wells. 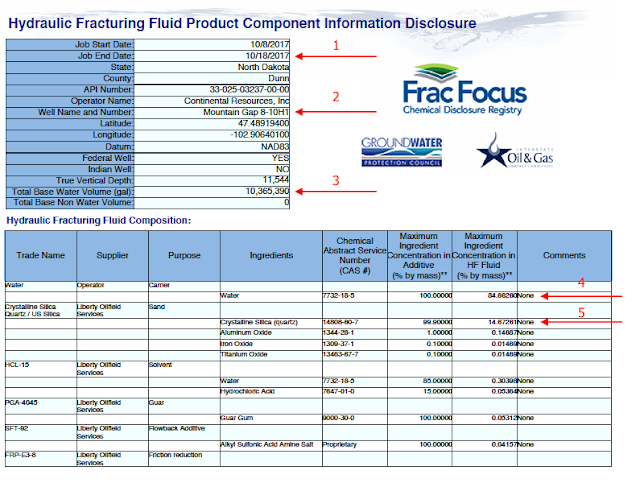 For the second well, #33120, either an error or something quite exciting; we will know when the wells come off confidential list: 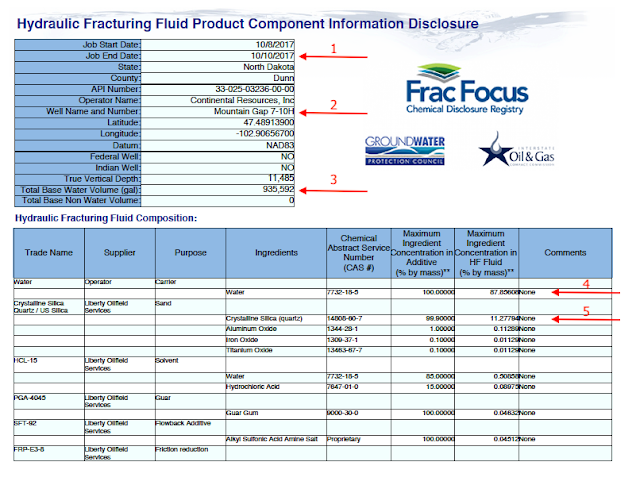 For #33120 with less than a million gallons of water, only two days for the frack:

For #33121 with the more "normal" ten million gallons of water, ten days for the frack:

I am eagerly looking forward to the file report for the Mountain Gap wells when they come off the confidential list.
Posted by Bruce Oksol at 4:01 PM No comments:

In that post, I referenced this Bloomberg article, from June 19, 2018 -- OPEC has a second shale dilemma (previously posted/linked) but did not include the graphic.


The Bakken’s recovery partly reflects producers working off a backlog of drilled but uncompleted wells (or DUCs, as they’re called). Exploration and production firms can choose not to frack a well that’s already drilled when oil prices are low, in order to save money. In the depths of the crash, Bakken producers’ backlog of uncompleted wells blew out to almost two years’ worth. That has plunged to under seven months: 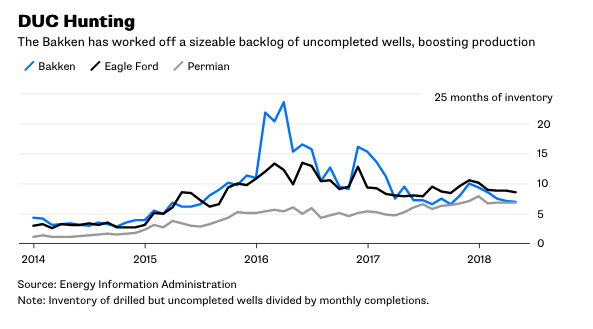 This is the first time I've seen this metric: "months of inventory" with regard to DUCs. I'm not sure what that means. One would assume it is related to number of frack teams available, or the historical number of DUCs that are reported completed each month. I don't know. 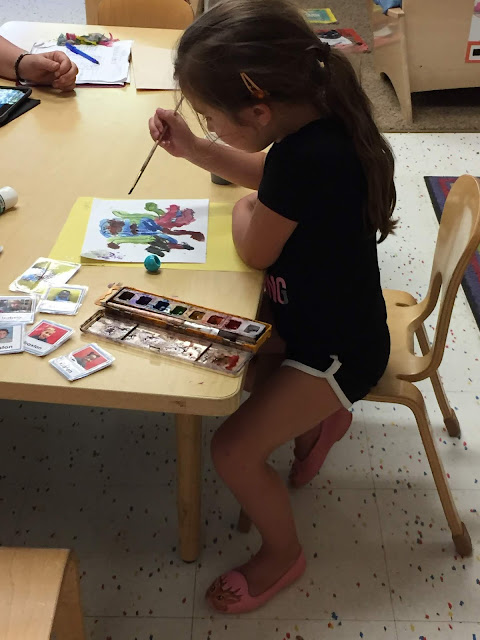 Original Post
I'll add the links later, but for now this note from a reader who is following the Mountain Gap wells closely:

Only access I have to allow me to see Mountain Gap 31-10H production for May shows a nice 17-day bump. File 17100. All other files in this 1280-drillion unit appear confidential.

Again, I will complete this post later, but look at the production profile for this well:
Monthly production updated (as of 4/18, back on confidential list):

Recent monthly production (prior to going back on confidential list):