CLR's Jersey Wells In Alkali Creek Have Been Updated -- February 2, 2019

The CLR Jersey wells in Alkali Creek have been updated.

Look at this well:
Production:

Why is this well important?

Posted by Bruce Oksol at 6:19 PM No comments:

We last spotted an article on Katie Ledecky on January 5, 2019. 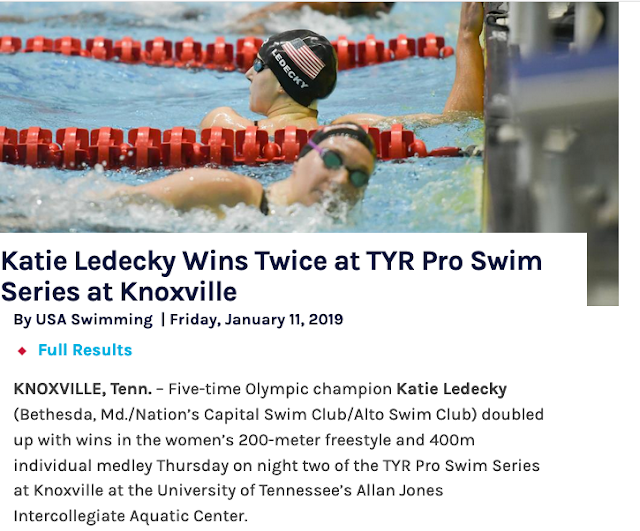 Something tells me this story has legs: https://www.golfdigest.com/story/webcom-tour-championship-winner-latest-victim-of-two-stroke-penalty-for-having-his-caddie-line-him-up.

PGA officials are looking at an earlier incident, same rule violation, involving Justin Thomas, the tournament leader earlier in the week. Justin Thomas is a big, big name on the circuit right now. It will be interesting how the PGA handles this one.

On another note, Ricky Fowler is doing very, very well. I hope he wins.

And, as long as I'm rambling: we're all going to miss Johnny Miller very, very much. Wow, he is good.
Posted by Bruce Oksol at 2:44 PM No comments:

Folks may want to archive this SeekingAlpha article and come back to it in ten years. Archived.

I don't have time to go into it now, but this well "proves my point":
Recent production:

Posted by Bruce Oksol at 2:25 PM No comments:

Hess earnings, 4Q18, as it pertains to the Bakken and earnings in general:
Expectations:

Top story of the week: without question -- the economic news
Top non-story of the week: as cold as it was, the "polar vortex" mostly set new "cold" records, but not much else; NoDaks have experienced this for generations, keeping the riff-raff out;

Refineries
Update on the Davis refinery; and, here;

Some random comments before I go.

The Bakken: the wells in the Bakken are getting better and better. It's quite phenomenal.
Echo dot/Alexa: incredible. I don't have "Kindle" yet but I'm tempted. Because of Echo Dot/Alexa, I now have Amazon Music -- another revenue stream for Jeff Bezos. I have had Amazon Prime (another revenue stream) which includes movies and television series (for "free") that will last me a lifetime. Everyone talks about the Apple "ecosystem." Amazon is beating Apple -- and this comes from Apple fanboy #3. If I had one thought on why this is occurring: Jeff Bezos releases products even before they get to the "beta" stage (some hyperbole here, but I'm trying to make a point) whereas Apple won't release anything until it's been vetted well beyond the "sell-by-date." Apple seems terrified of bad press. Best example: even Facebook/Mark Zuckerberg is "beating" Apple/Tim Cook. Everyone knows Facebook knows the privacy / social medial security worries are bogus.  Leonard Cohen wrote about the Apple/Facebook feud years ago.

Firefox: maybe it's just me, but after the most recent upgrade, the Firefox browser seems much crisper; that makes no sense, but I'm really impressed with Firefox. Except for one site (where I use Safari) I only use Firefox.

Scott Adams: I no longer follow him on Twitter. His re-tweets were superb but he has fallen off the rails. I now follow Katie Ledecky instead of Scott Adams. Hopefully Katie will stay in her lane.

Virginia: the state. Fascinating to follow. Rush Limbaugh had fascinating insights on the entire issue.

I think the best thing about "the original post" is the  human interest aspect.

I never met Hugh Routh. I wish I had. I would have enjoyed listening to his stories. Paraphrasing Stephen Hawking, "we all stand on the shoulders of great men and women." But here is another individual who came to remote, cold, desolate northwestern North Dakota and stayed for 33 years, even after retiring, did not want to leave his "home." Of the names mentioned in his obituary, I recognize a lot of the names but do not recall any personal anecdotes.

I did meet Bill Shemorry. I knew him as well as I knew anyone of his generation when I was in high school. He would not remember me, and he never had time for me. That's probably fortunate; had he taken me under his wing, I would probably be a photo-journalist struggling in some remote region of the world. But he was way too busy to mentor me. Wow, he was everywhere. Every Williston High School sports event; every Virgil Syverson "Band Day"; every political event; every civic event; every significant oil story, and even some not so significantly. One of his most famous oil rig photographs was on the cover of the Williston telephone directory some years ago. I had a copy of that directory for years; don't know if it's still in storage or not. I'm sure the photo is available in his collection. I always admired Bill Shemorry (from a distance). Willistonites are incredibly fortunate he captured the early history of Williston. It's almost as if he knew that Williston was destined for fame and notoriety. As I'm rambling...I have to look him up in my books on the history of North Dakota ... something tells me I will find more than a few mentions of his name.

Just for the fun of it, let's see if we can find anything on the Flying J Refinery, Williston, ND.

Fact sheet.
Shemorry photograph, this would be from the north, looking to the south, toward the river: 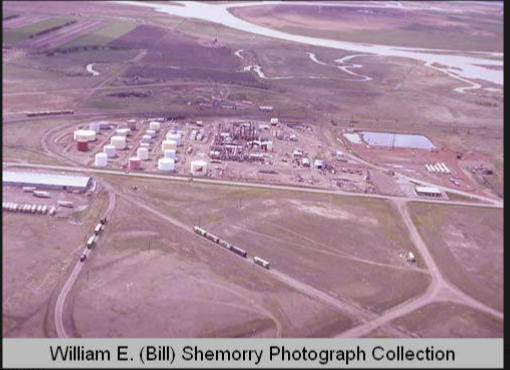 My hunch is that the "Muddy River boys" explored the Missouri River marsh seen in the photograph above.

I was given a soft cover copy of this book as a gift -- from a reader of the blog. A huge "thank you." Given to me some years ago. It looks like it may be out of print but available electronically. 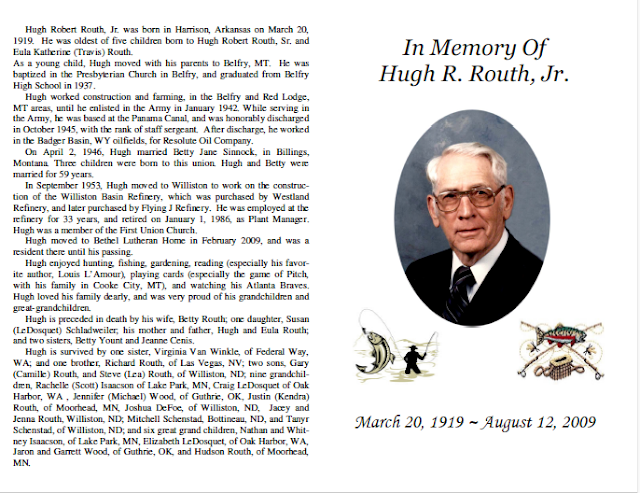 Great Essay On The Davis Refinery Near Dickinson, ND -- At The Oilman Magazine -- February 2, 2019


For years, the Bakken has been known to be a major oil and gas hub and it is the third largest U.S. shale oil field, behind the Permian Basin and Eagle Ford, in Texas. Primarily located in North Dakota, it also runs through Montana and two Canadian provinces – Manitoba and Saskatchewan....

The advantageous Bakken location was not lost on Meridian Energy Group, Inc., a leading developer of innovative advanced technology and environmentally‐compliant oil refining facilities, as they are currently in the process of building a state‐of‐the‐art crude oil refinery on over 700 acres of land (actual refinery footprint is about 150 acres) near Belfield, North Dakota – the heart of the Bakken. The Davis Refinery will be located close to oil and gas pipelines and major transportation highways. The Burlington Northern Santa Fe rail line runs directly through the refinery site, facilitating the construction of a crude oil feedstock offloading and refined fuels uploading terminal. Its location is strategic, placing it with direct access to major transportation infrastructure.

Archived.
Posted by Bruce Oksol at 8:39 AM No comments:

For the six-well pad to the west of this three-well pad, see this post. 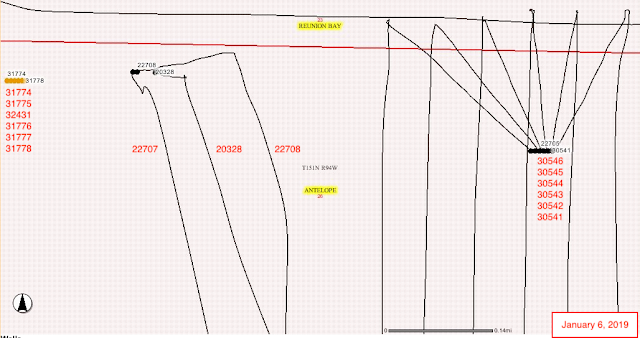