Covid-19 update: wow, the south is getting religion. This is awesome. Two days in a row, almost one million vaccinations given. Absolutely awesome. CDC data here.

This may be the best set of "pictures" I've seen in this weekly installment over at PowerLine. I can't even go through all the pictures. I had to stop at #5 or #6 -- they are simply so good I don't want to simply scrolls through them. I want to go through them slowly, savoring them all.

Headlines that caught my attention today: 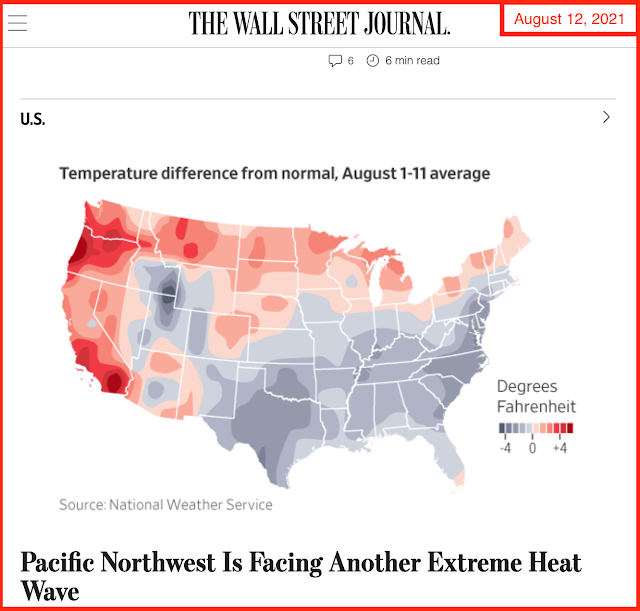 Does anyone else see the problem in the weather map above?

Breaking: US Is Doubling Troops Being Sent Back Into Afghanistan -- August 14, 2021

Original plan: 3,000 non-combat troops being sent back to Afghanistan to assist safe return of 600 US embassy staff.

Plan B: will now add another 2,000 non-combat troops to the original 3,000 troops to Afghanistan to assist safe return of 600 embassy staff.

Yes, I know that's not "double" the original numbers but when one starts adding in the additional support troops, aircrews, planners, ships, etc .... well, you get the picture.

I personally think they are "combat" troops but the SecDef specifically said yesterday, when asked, these were not combat troops. Actually, the wrong question was being asked. If one wants to know whether these are combat troops or not, simply ask if those going back in are getting "combat pay"? My hunch: they are.

Twenty years of whatever successes / non-successes the US has had in Afghanistan will now be decided in seventy-two hours.

Anyone who says there were "no successes" in Afghanistan over the past twenty years has no soul.

Combat pay is a monthly pay. If one spends one day -- again, one day in any one month in a combat zone -- the soldier, seaman, airman is paid a full month's combat pay.

When I was stationed in eastern Turkey two decades ago, a non-combat zone, if we were deployed for a day or two in any given month to Iraq on any kind of mission, we were paid combat pay for the month.

USAF pilots stationed in Incirlik AB, Turkey -- again, a non-combat zone at the time -- would "make sure' they "scheduled" at least one sortie over Iraq every month, log it as a combat mission, and collect combat pay for that month.

Combat pay is not taxable.

Anyone airman, seaman, soldier, paying attention, would put that combat pay into a retirement program, the most favored, the Thrift Savings Program.

That was two decades ago; I don't know if things have changed.

I'll go through the article later. A huge amount of definitions, data, and background provided.

A huge "thank-you" to the reader who sent me the link.

This assessment and previous assessments are tracked at the sidebar at the right.