President Donald Trump's administration is bringing employees it sent home for the government shutdown back to work to prepare for offshore lease sales and to open new waters to drilling.

The US Bureau of Ocean Energy Management (BOEM), in an revised contingency plan, says it is taking 40 workers off furlough to conduct lease sales, issue permits for seismic surveys and take the next step toward finishing a plan that would open more than 90pc of federal waters to oil and gas development.

The decision represents the latest effort by the Trump administration to avoid slowing down its energy agenda during a partial government shutdown in its 24th day. The US Bureau of Land Management has continued to process oil and gas drilling permits and hold meetings to open land in Alaska to oil and gas development.

That approach has raised red flags for environmentalists who say the administration is crossing the line on what activities can continue without appropriations from the US Congress. But it has softened the shutdown's effect on oil and gas companies hoping to gain a foothold in new federal areas before the end of the first term of the Trump administration.

I read elsewhere that the federal oil and gas "business" would come to a screeching halt with the partial government shutdown, but I guess that was fake news.

I also read that folks would not get their "food stamps." In fact, "food stamps" will be sent out early.

During the shutdown, his own White House kitchen is shut down; he fends for himself. And pays for dinners with his own money when he invites visitors like the NCAA football champions.
Posted by Bruce Oksol at 8:09 PM No comments: 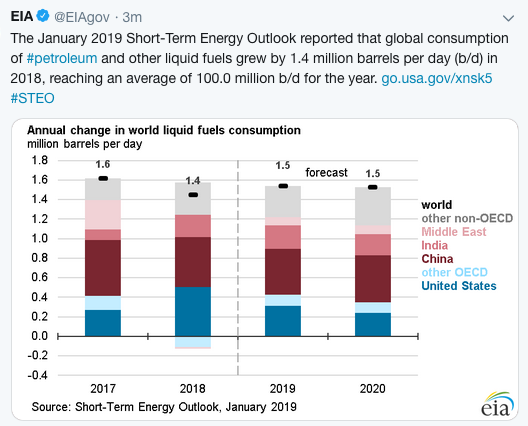 GS says it won't be hoodwinked.


“Goldman Sachs says it won’t be ‘hoodwinked’ again on commodities as it urges investors to buy into this year’s comeback story in oil, despite last year’s spectacular collapse,” Barani Krishnan, senior analyst with Investing.com, told Rigzone. “Saudi Energy Minister Khalid al-Falih, meanwhile, is doing his best to drive the bullish charge in oil, vowing to cut hundreds of thousands of barrels per day in supply.”

It is hard to see the "projection" on this graph, but if you look hard (and maybe use a magnifying glass) the trends are very, very interesting for coal, wind, and solar. Entirely unexpected. And the graphic only goes out to the end of the year? 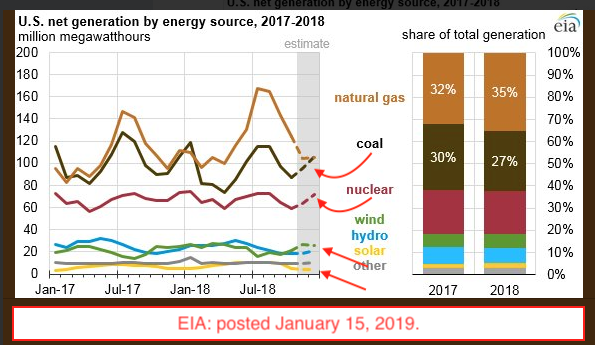 From the 3Q18 EOG presentation? Without looking:
How much did it cost EOG to drill/complete a well in the Bakken in 2012?
The answers are at this post.

As crazy as California laws are, even those laws (like facts) won't matter. It will all be up to one judge. My hunch: he/she is not going to make is easy for PG&E. Bankruptcy is not a sure thing, but then we start addressing such questions as "too big to fail"?

Meanwhile, for investors? Time to move on.

By the way, how is GE doing these days?

I honestly don't know. I've not been following the market (except in a very, very minor way).

But this from Chesto over at The Boston Globe:


The French government is planning to seek a big fine from General Electric for falling short on promises to add 1,000 jobs at Alstom's energy business that it bought in 2015. While the French finance ministry has said Boston-based GE had created 323 jobs as of April 2018, unions and local officials contest the number, leaving the company facing a maximum fine of 50 million euros ($57 million).

On a more pleasant note, May and I took a drive up to the Plano area today to have sushi. We try to visit the revolving sushi restaurant once or twice a month.


Toyoa's US headquarters moved from southern California (Los Angeles/Hawthorne) to Plano, TX, a few years ago. The new Dallas Cowboys training field/headquarters is somewhere in the same area. I've never seen so much construction in one area (except in northwestern North Dakota during the Bakken boom). This is all on the north side of Dallas, northeast of Ft Worth, on the north side of DFW (Dallas/Ft Worth airport). Two water parks -- or maybe, three -- in Grapevine, TX, where we live and now getting another one. New highways and expanding others. TexRail -- north Texas light rail from Ft Worth to DFW via Grapevine is now in service. Running free for the month of January.

Every time I drive up Highway 121 to Plano/Frisco with Olivia I tell her she will never see this much construction again in her life, except perhaps if she moves to China (or maybe India). It is absolutely incredibly.

It's interesting to look at all the cars in the Asian supermarket where we shop: every car today was Japanese -- Toyota, Lexus, and Honda. Two exceptions: one Porsche and one Mercedes.
Posted by Bruce Oksol at 3:32 PM 2 comments:

The Director's Cut Has Been Posted -- November, 2018, Data; Number Of Producing Wells Drops; Crude Oil Production Drops A Little Over 1%

The usual disclaimer applies: this page is done very quickly. There will be factual and typographical errors. If this information is important to you, go to the source.

The Director's Cut for the November, 2019, data has been posted. It will download as a PDF on your desktop. 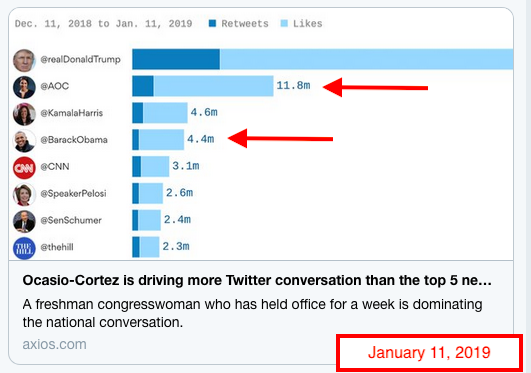 I'm not sure if Occasional-Cortex is yet aware that she is not legally able to become president. I believe there is no legal reason why she cannot run, but the constitution right now says she can't serve as president of the US.
Posted by Bruce Oksol at 2:41 PM 1 comment:

A History of the Arab Peoples: Albert Hourani, c. 1991

Some terms, some still used, some not:
From the prologue to give an example of the unity and extension of the Arab peoples:


Mamluk sultanate: Cairo was the capital; one of the greatest Muslim states of the time


Historians have traditionally broken the era of Mamlūk rule into two periods—one covering 1250–1382, the other, 1382–1517. Western historians call the former the "Baḥrī" period and the latter the "Burjī" due to the political dominance of the regimes known by these names during the respective eras. Contemporary Muslim historians refer to the same divisions as the "Turkish" and "Circassian" periods in order to stress the change in the ethnic origins of the majority of Mamlūks.


created an empire which stretched from northern India to Syria and Anatolia; "islamized and iranized" his empire; born in Uzbekistan; Timur gained control of the western Chagatai Khanate by 1370. From that base, he led military campaigns across Western, South and Central Asia, the Caucasus and southern Russia, and emerged as the most powerful ruler in the Muslim world after defeating the Mamluks of Egypt and Syria, the emerging Ottoman Empire, and the declining Delhi Sultanate.[7] From these conquests, he founded the Timurid Empire, but this empire fragmented shortly after his death.

Part I: The Making of a World, 7th to 10th Century

The notes will be continued elsewhere.
Posted by Bruce Oksol at 8:40 AM 2 comments:

Not overblown: Powerball million-dollar ticket winner sold in North Dakota. No one has claimed it yet. But "they" know who won:


“Pick & Click is a great service in which players never miss a draw or possibly misplace a ticket. Tickets are tracked for players and they are notified of any winnings.”

This was "pick and click online" which suggests that my dad is still playing the lottery from heaven, probably alongside St Francis of Assisi. .

The Director's Cut should be released late this afternoon. Link here. I was surprised that The Bismarck Tribune didn't have any forecast on what the latest production numbers might be.

Two wells coming off the confidential list today -- Tuesday, January 15, 2019
Active rigs (I'm somewhat surprised the number of rigs has remained steady despite the time of the year and the pricing of WTI):


RBN Energy: part 3, can US LPG export terminals keep up? Wow, what a great problem to have!


U.S. production of natural gas liquids is projected to increase by 17% this year, and by another 10% in 2020, according to RBN’s forecast.

These gains will result in similar increases in the output of propane and normal butane — two NGL purity products generally referred to as LPG — and, with U.S. demand for LPG expected to stay relatively flat, most of the incremental volumes will be sent to export terminals for shipment to foreign buyers. The question is, will the nine U.S. marine terminals that are equipped to send out LPG have enough capacity to handle the much-higher flows? Today, we continue our series with a review of four smaller export terminals along the Gulf and East coasts.

This is the third and penultimate episode in our series in which we’ve been discussing the U.S.’s flip from net LPG importer to net exporter seven years ago and the challenges presented by fast-growing propane/butane export volumes.

Waterborne LPG exports soared to an average of more than 1.1 MMb/d in 2018, with about 92% of those volumes being sent out of the half-dozen LPG terminals in coastal Texas and Louisiana. The rest of the exports-by-ship are flowing through a total of three smaller terminals in the Mid-Atlantic region and Pacific Northwest. We concluded with a review of the Gulf Coast’s — and the U.S.’s — largest LPG export facility: the Enterprise Hydrocarbon Terminal (EHT; dark blue dot and lettering in Figure 1), which is located on the Houston Ship Channel and whose capacity is in the midst of being expanded to 720 Mb/d from the current 545 Mb/d.