I don't recall if I ever read The Great Gatsby before I saw the Dicaprio movie, but after watching the movie more than a dozen times, I read the book (for perhaps the first time). I read it three times -- I think I've blogged about it before. I was thrilled when I "recognized" the climactic scene in the book. The climacx was not, of course, the accident or the shooting.

Now I'm in my John le Carré stage, I suppose. I have probably watched the Tinker Tailor Soldier Spy DVD not less than thirty times in the past six weeks. That, too, I believe, I have blogged about to some extent.

This past week I bought the book through Amazon, promptly lost it at the school where I pick up our granddaughters, and bought a second copy at Barnes and Noble. I had read the introduction and the first chapter before I lost the first copy. Last night I watched the movie again. It is absolutely incredible how brilliant the screenplay was, adapting the book to the big screen. Absolutely incredible. The opening "scene" -- the first chapter -- of the book is not seen for quite some time into the movie.

In TTSS there are no less than two or three characters that could have been the lead players with several others in supporting roles. I'm not breaking any new ground here; I'm sure if I researched this through the internet I would find a gazillion pages devoted to this. But it would be fun to explore with others the question of "who" the book was about or could have been about. Of course, the story was about the Circus (the intelligence agency) but to tell the story, Carré wrote it around the characters.

Before reading the book, based on the movie, I thought that the main character was George Smiley. And perhaps it is; we learn the most about him, including his personal life, and he is in most scenes, and was central to scenes in which he did not even appear.

After reading the first chapter of the book and then seeing the movie again last night, I feel that the story's lead character was Jim Prideaux. He, too, was in most scenes. It was his story that carried the whole story. We know almost as much about his personal life -- maybe more, it could be argued -- as we do about George Smiley's personal life. For example: do we know if Smiley had any children? We don't know for sure, but probably not. Did Prideaux have any children. Again, we don't know for sure, but it's more likely we are correct when we think that he did not. (If that makes sense.)

The story ends with George Smiley on the screen and it's a great scene, allowing us to walk out of the theater in a great mood, all's well that ends well. But the climactic, emotional scene was Jim Prideaux's.

Today's "Review" section in The Wall Street Journal was a let-down. Very little of interest. It wasn't until the second-to-last page when I came across a short essay by Kazuo Ishiguro, the novelist, on a Leonard Cohen song.


When I was writing my third novel, “The Remains of the Day,” in 1988, a friend insisted I buy Leonard Cohen’s new album, “I’m Your Man.” So I did, and when I put it on in my living room in London, I was blown away by “I Can’t Forget.” The song was unusual for Cohen. I had been a fan for some time, and his songs usually had a melancholy Euro-Canadian perspective. Here, the song was peculiarly American, with a pedal steel guitar and landscape imagery straight out of a Sam Shepard movie. What struck me most, though, was the chorus line—“I can’t forget but I don’t remember what.”

In the song, Cohen’s obviously haunted by some significant memory or personal loss and struggling to recall it. The concept was beautiful, but I didn’t quite understand the meaning at first. The song began to make sense after I listened to it a few times. Cohen wasn’t that old then—he was in his mid-50s—so the song wasn’t about frustration over senility. Instead, he seemed to have something important buried deep in his memory, but looking back made the recollection fleeting.

I was going to post the Pixies cover of the song -- I've listened to Leonard Cohen so many times I wanted to hear something different -- but I couldn't do it. The Pixies' cover is excellent, but they make it rock 'n roll; Leonard's is bluesy jazz or something to that effect and that's how the song should be sung.

The good news: a video I  had not seen before with some great shots of the backup singers. As a side note, my brother introduced me to Leonard Cohen; had it not been for Craig, I might not have stumbled upon Cohen.


Along with the Blackfoot, the Shoshone shared the Great Plains; they were driven into the Great Basin. The Shoshone had a four-pole tepee but it was odd: 1) it's got smoke flap pockets, which they probably invented; and, 2) its front two foundation poles are on either side of the door, at 5:30 and 6:30; the first time the Laubins saw a Shoshone tepee, they thought it was a three-pole tepee.

To invent the 3-pole tepee, a tribe only had to omit one of the poles straddling the doorway while putting it up; probably happened in the early 1600s.

The Comanche are a branch of the Shoshone that migrated south at that time, and they took with them the same strange four-pole tepee design, so the invention of the 3-pole tepee must have happened after that

The Mandan were in contact with the Shoshone because they stole their women (Sakagawea was originally Mandan; became Shoshone). The three-pole tepee is more stable out in the wind and the Mandan would have needed a more stable tepee

The Mandan traded with everyone, and that's probably how the three-pole tepee idea spread.

But the tribes diverged and their tepees evolved; flaps were different; some used holes for the poles; some used pockets.

I've been receiving links from a reader about this story for quite some time -- background stories or regional stories, I suppose. Now this story has become a national story and is a lead article in today's edition of The Wall Street Journal: nuclear energy companies are asking for a "bailout" of sorts -- of course, they don't want it called that -- to maintain production. The linked article:


Electricity producers in several states are asking for hundreds of millions of dollars in financial support to keep costly nuclear power plants in business—a move that is likely to boost customers’ power bills.

The utilities claim the nuclear reactors in question—located in New York, Ohio and Illinois—should be given special compensation because they are important to local economies and the electrical grid’s stability, and because they don’t emit greenhouse gases or other pollutants.

But consumer advocates don’t see why utility customers should be asked to subsidize these plants. They note that New York, Ohio and Illinois all deregulated their electricity markets more than a decade ago, a move meant to reduce power costs in part by weeding out the least-competitive power plants.

Nuclear plants cost a lot to maintain and staff because they must meet more stringent safety standards than other kinds of power-generating stations. In recent years, plunging natural gas prices have forced down wholesale power prices, making it hard for reactors to compete, though they still supply 19% of America’s power.

It all goes back to de-regulation ... which if memory serves me correctly, the industry wanted. But I could be wrong. 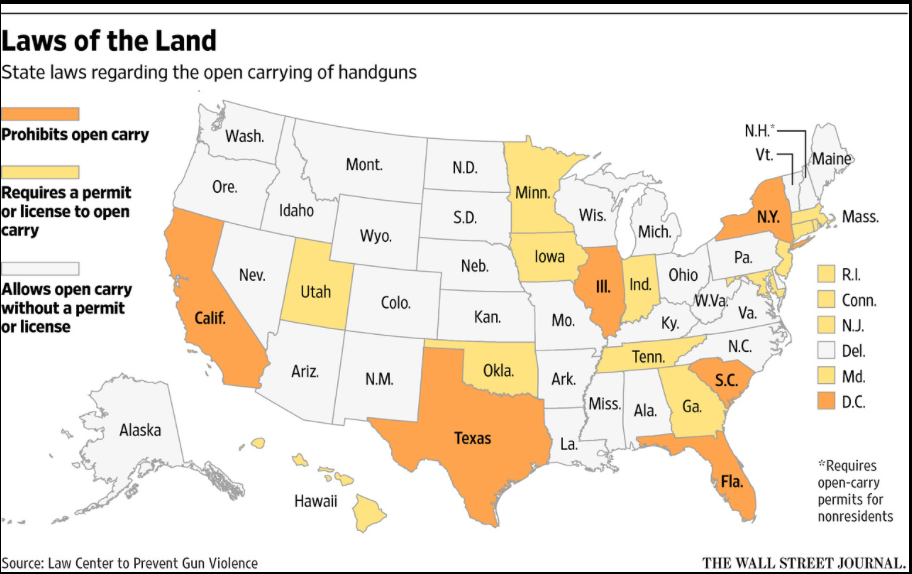 For all the talk about Texas being "out-of-control" when it comes to guns, Texas is one of only eight states that prohibits "open carry."

The story is in the news today because Texas may soon join the rest of the nation -- minus seven states -- in allowing open carry. If Texas becomes an open-carry state that will generate a lot of news stories, conveniently omitting the fact that a) only seven states then ban open carry; and, Ohio, Pennsylvania, Colorado and most of the rest of the country allow open carry.
Posted by Bruce Oksol at 9:42 AM No comments: