PFF grades every NFL player on every play on a scale of -2 to +2 using half point increments.

The grades are based on context and performance.

A four-yard run that gains a first down after two broken tackles will receive a better grade than a four-yard run on 3rd & 5, where the ball carrier does nothing more than expected. A quarterback who makes a good pass that a receiver tips into the arms of a defender will not negatively affect the quarterback's grade on that play, despite the overall negative result for the team.

Beyond just an overall grade, an offensive lineman receives one grade for pass-blocking and one for run-blocking.

The average grade is meant to be zero, and raw grades are normalized. In watching every game, PFF is also able to record information and create data that is typically unavailable. One example is how frequently individual offensive linemen yield pressure.

Another bit of serendipity. I enjoyed Powerline at one time but not so much any more; I seldom visit the site except on Saturday morning for the "week in pictures." But when bored, I might stop by. Wow, I'm glad I stopped by this morning. Every Sunday they have a segment on music, always (?) by Scott Johnson. This past Sunday -- I guess it was yesterday -- a piece on Tony Rice. A must read.

A British guitarist analyzes Tony Rice's technical ability. Another treasure and another example of how lucky we are to have YouTube. I know nothing about string instruments but I nailed it, watching Tony Rice, noting how Tony Rice managed to strum so quickly.

But in YouTube's wisdom, seeing what I was watching, the site thought I would enjoy this clip, recommending that I take a look. I had not seen this Phil Donahue interview with the cast of Steel Magnolias. It was fascinating. I never cared for Phil Donahue but that's okay. One can get past that and enjoy the folks on stage.

Note: Sally Fields name is misspelled and the uploader failed to mention Olympia Dukakis on stage.

Email ThisBlogThis!Share to TwitterShare to FacebookShare to Pinterest
Labels: Never_See_Snow_Again 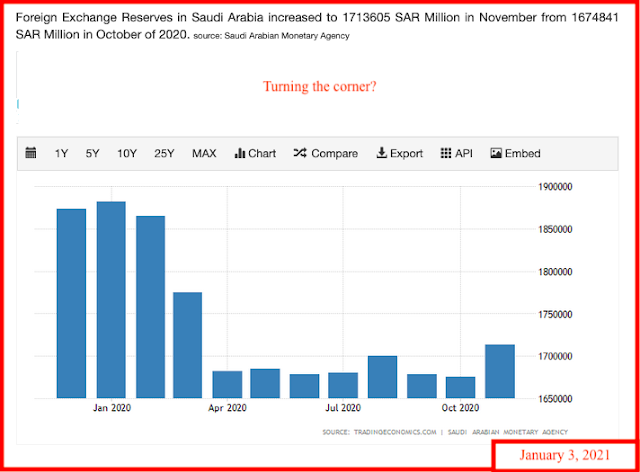 Now, let's look at change in price of OPEC basket:

Wow, wow, wow. Love it. Brings back many, many bittersweet memories. Oh, this looks like the pilot episode, season one, episode one, which I have never seen. OMG. What serendipity that I happened to tune in.

I may have to open a new bottle of Scotch. LOL.

The Vicar of Dibley.

The Bakken never ceases to amaze me. I thought an initial production of 82K bbls in the first month of production would be the end of the story, but the second month was almost as good. Remember when Bakken wells were considered to be good wells if they produced 150,000 bbls in the first year. LOL. Look at this.

I track record IPs at this link.

These wells are tracked elsewhere.

Yup, you guessed it. That jump in production tells me that neighboring wells have been fracked.

The last time we reported on these wells:

So, let's see what's going on?

Posted by Bruce Oksol at 9:53 PM No comments:

Warms The Cockles Of My Heart Whenever I See This In The Bakken -- January 3, 2021

Last time I reported on this well:

Note the AB. As in "abandoned.”

It's still not a good well, but I love it when any well experiences a near-death experience and comes back to life.

Posted by Bruce Oksol at 9:41 PM No comments:

From a year ago:


January 27, 2020: it looks like there are three more Kraken Black Federal / Hobart wells being drilled: