An alert, eagle-eyed reader caught this next story. I'm impressed.

Go back to this 2014 post for the background to this story:


The Sacagawea Pipeline project is being developed to deliver crude oil from various points south of Lake Sacagawea in and around Johnson's Corner and Keene, in McKenzie County, North Dakota, to destinations with takeaway options for both rail and pipe in Palermo and Stanley, N.D.

SPC has received significant shipper interest in committing to the project, and based on such, anticipates receiving sufficient shipper commitments to proceed with the project.  All potential customers will have an equal opportunity to obtain capacity in the project and must submit binding commitments prior to the conclusion of the open season process.

Now, today we have this story, sent in, as I noted, a very, very alert reader. From a press release:


Ares Management, L.P. (NYSE:ARES) announced today that funds managed by Ares EIF, its power and infrastructure strategy, have closed on the acquisition of substantially all of the assets and business interests of Paradigm Energy Partners from an affiliate of Stonepeak Infrastructure Partners.

The Paradigm assets will be combined with Ares EIF’s adjacent Van Hook Gathering System, which it acquired in 2015, to form a premier regional midstream platform serving the core of the Williston Basin in North Dakota, with additional reach into the prolific Eagle Ford Shale in South Texas.

The acquisition consists of two oil and natural gas gathering systems in North Dakota and a third in South Texas, along with joint venture interests in the Sacagawea Pipeline Company and various logistics assets in North Dakota.

By year end 2018, the combined company is expected to transport nearly 50,000 barrels of oil and 23 million cubic feet of gas per day from 11 contracted customers in North Dakota and Texas.

Time for a song:

September 7, 2018: But take a look at this. Reuters suggests US crude oil stockpile decline -- more than expected last week -- is a bullish sign --

Refiners' demand for crude oil and drivers' demand for gasoline remain supportive of the market, with gasoline demand remaining near the highest levels of the season, he said. Still, he cautioned that rising stockpiles at Cushing were somewhat bearish.

This is certainly weird and proves the rule: predicting the price of oil is a fool's errand.

WTI falls 2% even though the EIA reports a substantial crude oil draw.
The gasoline demand graph: 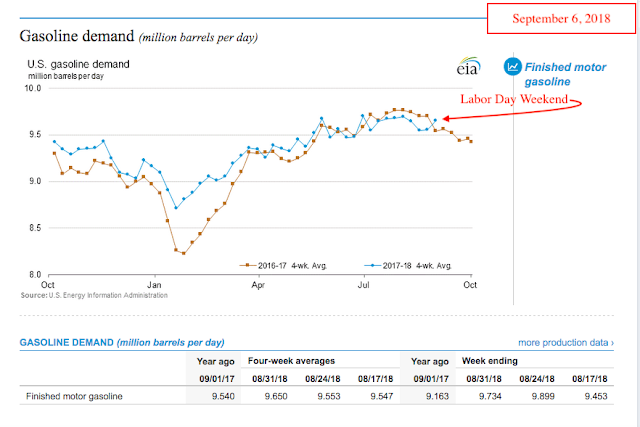 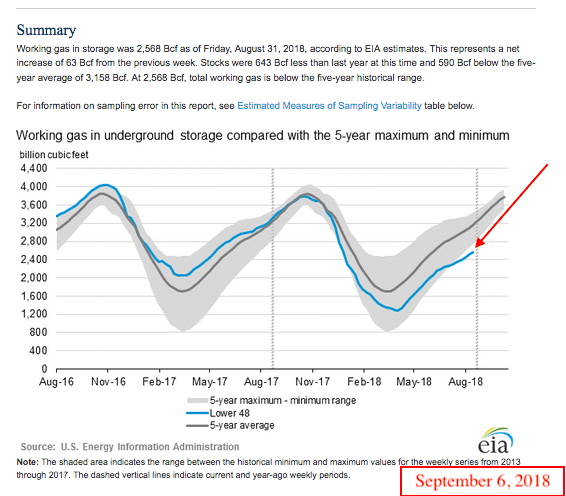 This page will not be updated; these wells are now tracked here.