Movie night: wow, wow, wow: A Hard Day's Night on TCM. Incredible. What a treat. From wiki. The end credits are incredible.

Just Happy To Dance With You:

I'm Happy Just To Dance With You, The Beatles
It is amazing all the "trivia" associated with this wonderful song. It was released July 20, 1964; released exactly, to the day, five years before the first moon landing.
My parents went to England in 1964. Mom brought back a Beatles album for me.  No, I no longer have the album.
Tonight's races, eighteen months old:
Posted by Bruce Oksol at 9:30 PM No comments:

Posted by Bruce Oksol at 6:43 PM No comments:

These are the three new Whiting permits today:

Already in that drilling unit:

General Milley: what he got right; what he got wrong -- Peggy Noonan at The WSJ. In the big scheme of things I agree with her. But have you noticed how fast the Afghanistan evacuation story disappeared? I mean, that story has really, really disappeared.

Energy poverty: when, not if; just a matter of time. UK, link here:

Peak oil? Worldwide energy shortage shows up in surging coal, gas and oil prices. Link to twitter and then to Reuters.

UK: 50-fold jump in power rates. Link to Tsvetana Paraskova. Putin lovin' it. The good news? It's transitory. Likely to last only through 2027.

Arctic: oil is booming despite strong opposition. Link here. And look at this -- look which American company is among three international E&P companies? Gazprom, Total, and COP. For the record, I'm accumulating shares in two of the three. LOL. American banks providing huge amounts of financing, along with private equity giants like BlackRock. Report provided by a faux environmentalist.

Groningen: from Alexander Stahel @BurggrabenH -- Groningen was a key EU gas producer (yes, ageing but still solid) and is to be turned off next year due to seismic risk in the region. JSMH. Link here.

And they survived Covid-19, the plague year.

No one should complain. US judgeships are generally lifelong appointments.

Your resume. What to include; what to leave out. Link here to The WSJ. There's some valuable tidbits for college students.

Academic coursework: Listing courses taken while earning a degree or certification tells employers nothing about your abilities; it only speaks to your attendance. Neither does a GPA, which only demonstrates that you were a good student. Even if you are a recent college graduate, a better strategy is to write about a group project, a case study you wrote or a hypothetical model you built while in school. These types of details demonstrate to employers what you are capable of far better than a course list or GPA.

From a reader, the following will be added to the post were I now follow active rigs in North Dakota.

September 24, 2021: a reader provided additional information that can be added to previously posted information -- with these additions, one could argue that the number of active rigs in North Dakota might trend toward 40 in early 2022; drillers drill throughout the year in North Dakota, but due to severe winters, some of this could be delayed to 2Q22. Fracking really slows down in the first quarter due to weather.

I "predicted" CLR, Whiting might add a rig; that CPEUSC would have a rig (apparently they do). I forgot about Koda Resources and Iron Oil and Gas. I actually thought about Iron Oil and Gas last night -- this is nice to see.
Posted by Bruce Oksol at 10:26 AM 4 comments:

Hearing dockets: one of the highlights each month with regard to the Bakken is the posting of the monthly hearing dockets. Two things jumped out at me in the October, 2021, dockets:

The usual disclaimer pertains. This is done quickly; there will be typographical and content errors. Shorthand notes necessarily are incomplete. If this information is important to you, go to the source.

Remember, these are cases, not permits.

Remember, these are cases, not permits.

Most recently, August 5, 2021, there was a discussion regarding CLR and the TMS play.

A reader alerted me to this wildcatter (?). New TMS activity;

Petition of State Line Exploration, LLC, requesting the Board to integrate, with alternate risk charges, all interests in 2,160.5-acre oil unit, situated in in Sections 7, 9, 10, 11, 22, 23 and 24, Township 1 North, Range 2 East, to horizontally drill the Reese 11 No. 1H Well to a depth of 12,500’ to test the Tuscaloosa Marine Shale Formation at a regular bottomhole location, with authority to drill multiple horizontal wellbores.  Alternately, Petitioner requests the Board to integrate all interests in said unit without alternate risk chares.

Information suggest the approximate vertical depth will be 12,500 feet with an estimated measured depth of 19,000 feet. Very similar to Bakken depths. A 2,160.5 acre drilling unit would be a four-section line unit (overlapping unit) in the Bakken.

Cost: again, around the same costs as Bakken wells early in the Bakken boom, less than $10 million but more than $7 million.

I may have my geography wrong, but the original (recent) note on the TMS was centered on tracts west of Baton Rouge and directly east of the Texas - Louisiana state line.

On the other hand, this newest wrinkle, the Reese 11-1H is near Amite City, Tangipahoa Parish, is well northeast of Baton Rouge and northwest of New Orleans.

By the way, on another note, the name of this LLC is interesting: "State Line Exploration, LLC." Obviously the "state line" is the Texas - Louisiana state line.

If nothing else, I'm starting to learn the geography and parishes of Louisiana. 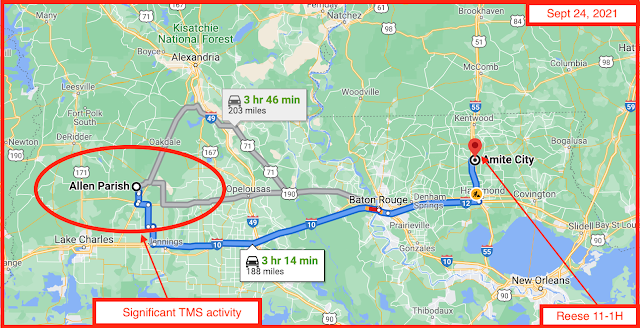 No Wells Coming Off Confidential List -- Update On The Tuscaloosa Marine Shale -- September 24, 2021

China: the electricity shortages in China are worsening ... it's getting so bad, Beijing is now asking some food processors (like soybean crushing plants) to shut down. Link here.

Jargon: I heard this phrase for the first time the other day on CNBC from one of my favorite analysts: "ROIC greater than WACC." Need to explore. I know nothing about WACC. Link here. "Burggraben" was also new to me. German for "moat."

Apple, Inc: I updated my thoughts on Apple (very, very positive) last night but put the post in draft thinking I was too far ahead of my headlights. Today, it's being reported that my observations were spot on. Now, we have a new rating: a "strong buy" recommendation wiht a new price of $198, up 35% from current levels. Why don't we just all it $200? Because $198 sounds so much more "real." Link here.

Unhelpful: another WSJ article on the bottleneck at California ports but no explanation why. Link here.

Covid-19: Alberta -- the oil province -- has by far the highest Covid-19 case numbers among Canadian provinces, and one of the lowest vaccination rates. But apparently holding Covid parties to enhance natural immunity. Link here.

Active rigs: no longer being reported by NDIC. Best estimate: 26*.

No wells coming off confidential list according to NDIC.

A long, long time ago — or, more precisely, in the spring of 2014, when WTI was selling for more than $110/bbl — a handful of exploration and production companies were convinced they were onto something big in southwestern Mississippi and east-central Louisiana.

There, they believed, the Tuscaloosa Marine Shale (TMS) was poised to become the next Bakken, the U.S.’s premier shale play at the time, but even better for producers seeking more robust crude prices because of TMS’s very low gas-to-oil ratio — an oil cut north of 92%! –– and proximity to Gulf Coast refineries.

While there had been a host of failed efforts by producers to wring out large volumes of premium-priced Louisiana Light Sweet (LLS) oil from the marine shale’s sedimentary silts and clays, the E&Ps felt in their bones that they were finally “cracking the code.” Then, at just the wrong time, came an oil price crash that set the whole industry back on its heels and activity in the TMS quickly slowed to a crawl. As we discuss in today’s RBN blog, an even smaller cadre of Tuscaloosa Marine Shale true believers is now banking on a production revival in the core of the play.