A reader sent a few photos of Sharon #1 -- they have been posted.

This gives me an opportunity to thank my readers for their patience with me: I post a lot of political stuff and a lot of stuff about my granddaughters, but despite all that, they all stick with me. Much appreciated. I post the other stuff to help put the Bakken into perspective and to keep the blog interesting. The primary purpose of the blog, of course, is to help folks understand the Bakken.

By the way, on those Sharon photos that have just been posted, I noted the wonderful scenery in the background -- and no snow. It looked like a beautiful day in the Bakken to be taking a drive.

Speaking of which ... posts about things other than the Bakken --- first snowfall in Vermont this season --- open those natural gas pipelines --- heat those homes.

There is an incredibly poignant story in The Bismarck Tribune:


On Saturday, wounded veteran Cpl. Mark Haegele raised a flag over his new house. Then, with his wife, Kari and 7-month-old daughter, Kinley, he cut the ribbon on the entrance and rolled in for a tour.

Haegele served a little more than two months in Afghanistan, working demolition, until April 21, 2011, when an improvised explosive device detonated underneath him, taking both legs and causing hearing loss and injuries to both arms.

Now, he has received a mortgage-free home, courtesy of the organization Homes For Our Troops, their partner builder, Patriot Homes, and many donors.

"You don't really expect it, that people care so much," said Haegele, who has been living, with his family, in an apartment, which he admits can be a struggle, especially when he is trying to make his favorite snack of Ramen noodles on a stove that is too high. "A lot of stuff in the apartment is impractical for a guy in a wheelchair."

The new home contains wider doorways to accommodate Haegele's wheelchair, lower countertops, pull-down shelving and an easy-to-reach stove. But Haegele says he is most looking forward to the bathroom, which has lots of space and a large, roll-in shower.

"The planning (for the home) rolled out perfectly," said Tory Otto, the owner of Patriot Homes and a disabled veteran. "Every feature is top-notch .... The construction staff were good to work with and extremely knowledgeable."

HFOT community outreach voordinator Brianne McNamara said this is the first home in North Dakota to be built by HFOT.

This is what happens when ideology gets in the way of facts/science. Being reported in The Los Angeles Times: Governor Brown's link between climate change and wildfires is unsupported, fire experts say.


The ash of the Rocky fire was still hot when Gov. Jerry Brown strode to a bank of television cameras beside a blackened ridge and, flanked by firefighters, delivered a battle cry against climate change.

The wilderness fire was "a real wake-up call" to reduce the carbon pollution "that is in many respects driving all of this," he said.

"The fires are changing.... The way this fire performed, it's not the way it usually has been. Going in lots of directions, moving fast, even without hot winds."

"It's a new normal," he said in August. "California is burning."

Brown had political reasons for his declaration.

He had just challenged Republican presidential candidates to state their agendas on global warming. He was embroiled in a fight with the oil industry over legislation to slash gasoline use in California. And he is seeking to make a mark on international negotiations on climate change that culminate in Paris in December.

But scientists who study climate change and fire behavior say their work does not show a link between this year's wildfires and global warming, or support Brown's assertion that fires are now unpredictable and unprecedented. There is not enough evidence, they say.

Interestingly enough this was the lead story, front page, above the fold, in The Los Angeles Times, perhaps the most ideological-political newspaper with readership second to none. I never would have expected to see this in the LA Times, much less on the front page, much less the headline story.
Posted by Bruce Oksol at 6:10 PM No comments: 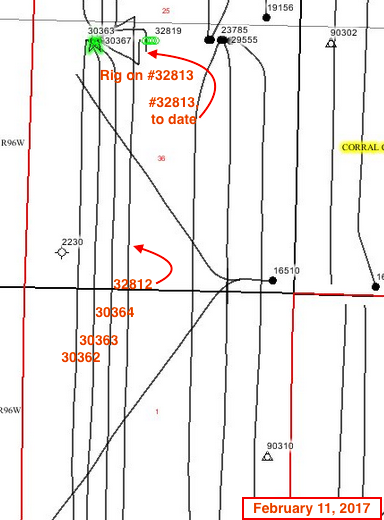 
It's been off the rod pump and flowing since the frac job on the CLR Ecopad to the north.

Original Post
All four of these wells were originally COP/BR wells that are now operated by CLR, dual short laterals from same wellhead, different sections: 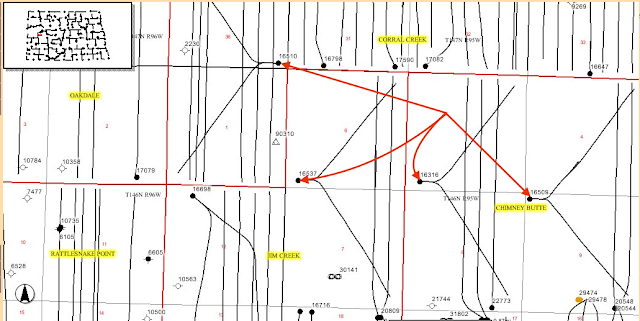 Here are some interesting data points:


I'm getting way beyond my comfort zone, but if this has to do with halo effect, fracturing, fracture lines, and porosity, we might be seeing something that the operators suspected some time ago. And, of course, with operators choking back and controlling monthly flow on producing wells, maybe nothing is going on, and this is all simply my imagination. 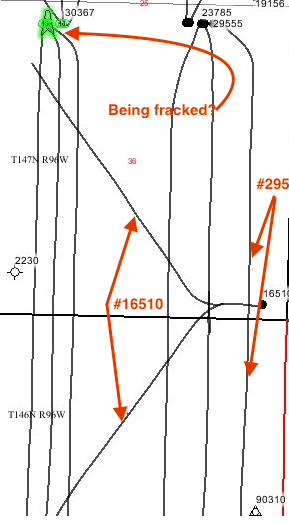 From The [London] Telegraph:


Almost a year ago Rafael Ramirez, Venezuela’s long-serving former oil minister, emerged from a tense meeting of the Organisation of the Petroleum Exporting Countries (OPEC) looking red faced and furious.

Within the privacy of OPEC’s steel-clad secretariat building in Vienna’s quiet Helferstorferstrasse, Ramirez had remonstrated angrily with his counterpart from Saudi Arabia, Ali al-Naimi, about the urgent need for the group of major oil producers to push up the price of crude back to a level around $100 per barrel.

The two men couldn’t be more different in appearance or world view. The diminutive Al-Naimi is a rarity in Saudi Arabia, having risen to arguably the country’s most important job from humble origins as a Bedouin shepherd boy.

However, Al-Naimi stands as a titan in the global oil industry and wields the real power within OPEC, a group that controls 60 percent of the world’s oil ...

... Heading into the meeting in Vienna, Ramirez, who is now Venezuela’s ambassador to the United Nations, has already signalled his country’s intention to press for a change in policy. Lower oil prices have crippled Venezuela’s economy, where a 22 percent spike in food price inflation in August has meant the country is even struggling to feed itself.

Ramirez said he wants OPEC to cut production by introducing a series of price bands starting at $70 per barrel. The proposals he said would be formally presented for discussion at a meeting of “technical experts” which OPEC is convening on October 21.

This has potentially put Venezuela and its close allies within OPEC, including Algeria, Nigeria and Iran, on a collision course with Al-Naimi and his Gulf Arab clique who still appear determined to maintain their current strategy.

According to OPEC’s former president, Abdullah bin Hamad al-Attiyah, a change in policy is unlikely without any cuts in production being matched by countries outside the group such as Russia and Mexico.

“OPEC has no choice because they no longer have the tools to be a global “swing producer” anymore,” Al-Attiyah said. The former Qatari energy minister points to OPEC’s falling share of the world market, down to just over 30 percent from almost 60 percent 20 years ago.

Saudi Arabia’s power within Opec comes from its vast oil reserves and production, which it has increased significantly since last November. It pumps around 10.5m barrels per day (bopd) of crude and has the capacity to increase output by 12.5m bopd if it so chooses, which gives it tremendous power alone to influence world oil markets. 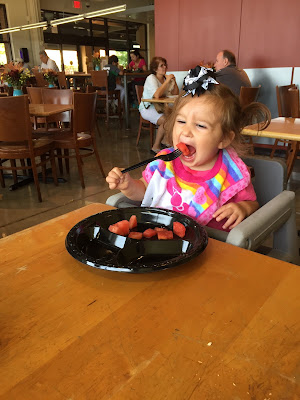 Sophia: maybe we should cut the watermelon into smaller bite-size pieces.
(She is not crying as some folks thought; she was laughing and having a great time;
she is simply straining to get her mouth open wide enough for the watermelon.) 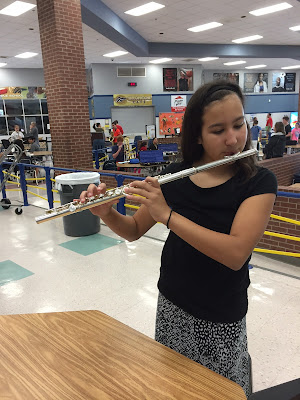 Arianna: preparing for her audition.

By 1945, Gellhorn's relationship with Hemingway had come to an end. She had moved on, serial relationships, and had adopted an Italian 19-month-old boy. In a letter dated February 3, 1950, written from Cuernavaca to her new beau she asked if he had read Hemingway's latest book, Across the River and Into the Trees.


But just now I have to write you about Ernest's new book; have you bought your February copy of Cosmopolitan? If not, do so now.

I have just read this first installment, with a whiskey to help me, and curiosity to spur me on. I know I am biased and unjust; but I find it revolting. I also realize he will never have to write his autobiography because he has been doing it, from the first novel, chapter by chapter, each book keeping pacing with his calendar years, building up this dream vision of himself.

Now he is a fifty-year-old Colonel of Infantry with high blood pressure, a great education, and a passion for duck shooting. The women get younger and younger; so that now the woman is an olive-haired Italian (perhaps Princess, by the next installment) of nineteen.

And I feel quite sick, I cannot describe this to you. Shivering sick. I watch him adoring his image, with such care and tolerance and such accuracy in detail....

.... And I feel sick, and you know what else: I weep for the eight years I spent, almost eight (light dawned a little earlier) worshipping his image with him, and I weep for whatever else I was cheated of due to that time-serving; and I weep for all that is permanently lost because I shall never, really, trust a man again.

You must read it and tell me, if anyone not me, not knowing who sits for the portrait, (with an expression of reverent self-love on his face) will accept this and find it fine. Perhaps it is. To me, it has a loud sound of madness and a terrible smell of decay.

I am re-reading Islands In The Stream and that was also my first thought: this is simply an autobiography, chapter by chapter of the author's life. It's not bad; it's just not good.

New Poll: At What Rate Could DUCs Be Fracked During First Six Weeks Of Next Turnaround -- October 18, 2015

With regard to this next poll, let me say upfront: "I have absolutely no idea." I don't know if anyone does.

This is the question: At what rate could DUCs be fracked during first six weeks of next turnaroud?

These are a few parameters and miscellaneous comments:
If the operators in North Dakota are to complete 1,600 wells / year (out of about 2,000 permits), that works out to about 30 new wells each week, so one would think the minimum number of wells coming on-line in the next turnaround would be well above 30.

So, I'll throw it out there just for "grins."

I suppose there's a corollary, but I won't ask for now: if/when there is a turnaround, will DUCs or newly-drilled wells take precedent in fracking? This may be a no-brainer; I don't know.
Posted by Bruce Oksol at 2:26 PM No comments: