The well, first drilled back in 2007, recently had a huge jump in production:

Quick! According to the WHO, how many people have died of the new Covid-19 variant, Omicron?

Answer to be provided in a later post if I don't forget.

For investors: an open-book test and it isn't rocket science. My understanding: one or two of the US vaccines remain the vaccines of choice. 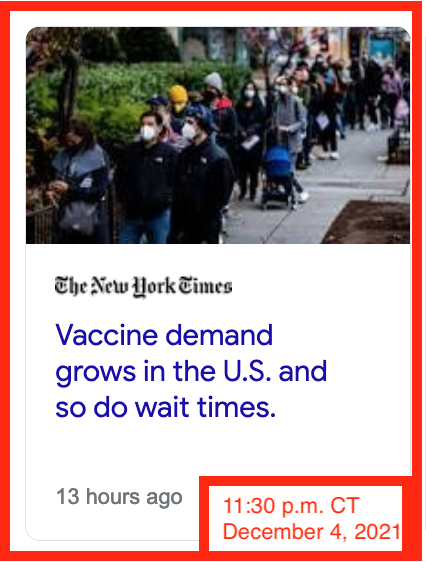 I don't think shortages will occur, although it could be close. But if Brandon really wants to get folks vaccinated, all he has to do is announce that due to high demand, there may be shortages of the vaccine after the first of the year.

Back To Black, Amy Winehouse
Posted by Bruce Oksol at 11:34 PM No comments:

Just a few miles down the road from where I live is Schwab's largest campus. At least I think it is. Someone can fact check me on it. Perhaps the one in San Francisco is larger. Link here. 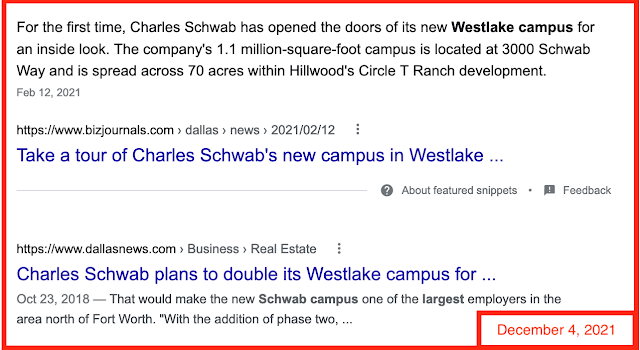 A mile closer is/was a brand new TD-Ameritrade campus that was nearing completion or perhaps completed when it was announced that Schwab would be acquiring TD-Ameritrade. That was two or three years ago.

Where does the merger stand now?

Financial cost of integration, Schwab and TD-Ameritrade, link here: about a half-billion dollars more than expected; now estimated to be around $2 billion to $2.2 billion. Original estimate: $1.6 billion for the integration.

Largest mergers of the last 20 years, link to 247wallstreet: the list provides the top 100. Schwab / Ameritrade barely makes the list, coming in at 99. It's a pain to go through the list with all the advertisements, but it's manageable.

My hunch: Schwab moves headquarters from San Francisco to Ft Worth, Texas, in 2025.

Does It Really Matter Through Which Lens We View Energy Any More? December 4, 2021

A reader sent me an interesting energy article from the current issue of Foreign Affairs, January/February 2022. . The writers at the linked article look at the curent global energy picture through the lens of global warming; atmospheric CO2; and, renewable energy.

However, if one reads the article through the lens of US energy dominance one reads a completely different story.

I haven't read the article closely; I've scanned through it and read it more closely later. But I'm beginning to wonder: perhaps it no longer matter through what lens we read these types of articles.

For Europe, their Plan A, now that they have shut down their nuclear plants and coal mines, is renewable energy. Europe and the UK have no Plan B, although the UK is talking about hydrogen power. But to my hydrogen, takes a lot of electricity.

Bottom line: no matter how you view it, or through which lens you are watching, the energy gap between the US and Europe is going to keep widening.

By the way, it's interesting to see that we said the same thing back in 2013 -- eight year ago.

I assume a lot of folks from Williston and Watford City have inherited minerals from wells on Indian Hill. This is an old, old field.

Earlier this week, based on a request from a reader some months ago (or maybe a year ago), I went back to look at Indian Hill -- a completely random choice for doing something.

There was a subtle indication that there had been some recent activity. I sent a note to that reader along that line, but suggesting we might not see anything official for six months to a year, just because the wells might remain on confidential status and because of the NDIC IT problems.

But there it is, today:

The reader was notified of this about a week ago, and today it's being reported!  Pure serendipity.

The NDIC IT problem forced me to look at different ways to find data for individual mineral owners, and in the big scheme of things the NDIC IT problem has probably been a "good" thing for me. I've had to work harder to sort things out. It resulted in a much better way for me to manage the blog. But it sure is frustrating.

The definitive rig report for December 3, 2021, is posted here.

Seven producing wells (DUCs) reported as completed: this is one of the largest number of DUCs reported completed in one day in a long time, maybe "ever":

Disclaimer: in a long note like this there will be content and typographical errors. I don't even know if the numbers add up. But it is still the best summary out there with regard to the Bakken and remains, the definitive rig report. But if this information is important for you, go to the source.

Summary of changes or things that caught my eye(s):