If we have much more of this global warming, we're going to need to move Halloween to August 31, and Thanksgiving to September 27, so that we can enjoy temperate weather.

Name the Mary Tyler Moore actor/actress who had an uncredited role in MASH, the movie.

Later; about five minutes later -- wow, this is the #1 reason I love to blog -- the readers. See first comment.
Posted by Bruce Oksol at 9:57 PM 4 comments:


Three new permits:
Three producing wells (DUCs) reported as completed:
Obviously, we really can't do this but 21,578bbls after two days (#33941) extrapolates to 323,670 bbls in 30 days. LOL. But Lynn Helms always said the TFH wells might be better than a middle Bakken well at the same site. Record IPs in the Bakken are tracked here.
Posted by Bruce Oksol at 9:46 PM No comments:

November 27, 2018: for the reader who thought John Kerry was opening for Williams & Ree in the photo below (warning: strong language; may not be suitable for young children):


November 27, 2018: according to talk radio down here in north Texas, Maxine Waters has now joined John Kerry and Hillary Clinton in opining against open borders. If so, the Democratic National Party has released a new talking paper on immigration.

November 27, 2018: prediction -- Beto will run for US president in 2020. This will infuriate Bill and Hillary. Beto will suck all the $$$$$$$$$$$$$$$ out of the Democratic donors. The Clintons have announced their tour dates. Did anyone hear how the Las Vegas event, November 18th, went? I didn't hear a thing. It's too late, now, I think, but it would not have surprised me to see Beto go on tour with them. If the tour does badly, I could imagine him being on stage for the last few events. I just googled the review of their first event -- Las Vegas -- November 18, 2018 -- and after looking through first five pages of google hits not one mention of the tour or how it went. Knowing how much they like the limelight, I'm surprised no "press release" disguised as a news story talking about how great the event was. Let me know if you know anything. 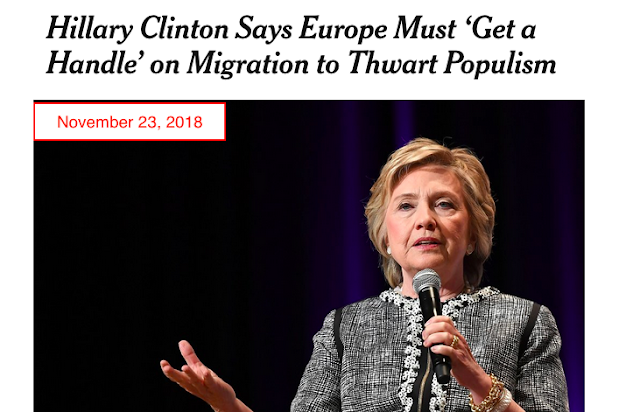 From the Daily Wire: 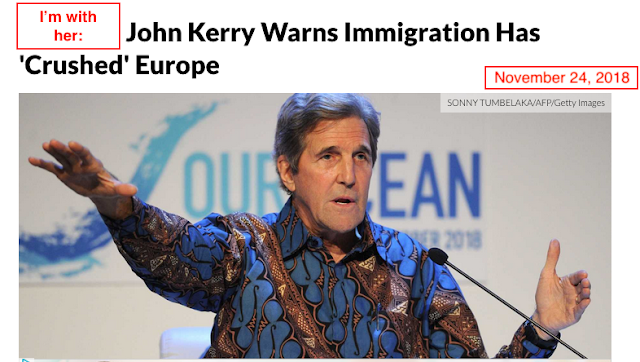 This tells me the movers and shakers interpret the mid-term elections as a win for Trump.

The gas production doesn’t come alone, however. There are also NGLs associated with that, which require their own infrastructure. Using a conservative estimate of 6 gallons of NGLs per thousand cubic feet of gas, that would suggest about 40,000 new barrels of NGLs per plant that will also need takeaway and processing infrastructure.

Bakken gas can be as low as 2 NGLs per thousand, but is more often up to 10, making 6 GPM a conservative estimate.

By the way, it is very, very likely that the Tribal Council will mandate royalties to be paid on natural gas that is flared. Stay tuned.

By the way, this reminds me. Think about this. Words matter.

The Bakken is considered an oil play, but yet it is producing phenomenal amounts of natural gas, and the production is predicted to increase significantly (exponentially?).  One has to wonder if there really might be something to the "sleeping giant." If natural gas ever got to $8/"unit" we might find out ["unit' = MMBtu, or million British thermal units].

If anyone is interested in the back story of how Herman Melville came to write Moby-Dick, the best short biography I have ever seen is Chapter VII in Philip Hoare's The Whale, c. 2010.

Meanwhile, I'm continuing to have a blast reading The Bible: A Biography, by Karen Armstrong, c. 2007.


Unlike the Deuteronomists, P's vision was inclusive. His narrative of alienation and exile constantly stressed the importance of reconciliation with former enemies. Nowhere was this more apparent than in his most famous work, the first chapter of Genesis, in which P describes Elohim creating heaven and earth.

This was not a literal, historically accurate account of creation. When the final editors put the extant biblical text together, they placed P's story next to J's creation narrative, which is quite different.

So, even though P came later, his/her writings were the basis of Genesis. That's why it was confusing for me. I always thought the extant Bible was like a journal, or a diary, chronologically put together as J, E, D, P were writing. I was wrong to think that the beginning of the Bible was J's work and then E added to it, and then D came along with Deuteronomy. Finally P came along and did the chapters after the torah. In fact, the editors or redacters came along (after J, E, D, and P) and re-ordered everything and edited -- probably mostly typographical errors, etc.

So, even thought P came along much later, P's work was placed right alongside that of J and E. It makes sense; I just never gave it enough thought.

Later: shortly after writing the above, I went over to Sophia's house. They had just received the December, 2018, issue of The National Geographic. As usual, every December, these magazines feature a story on Christianity. (More later.)
Posted by Bruce Oksol at 8:56 AM 2 comments:

Is anyone making money? One would think with WTI flirting with $50 that refineries would be doing very, very well. Think again. This caught me by surprise. 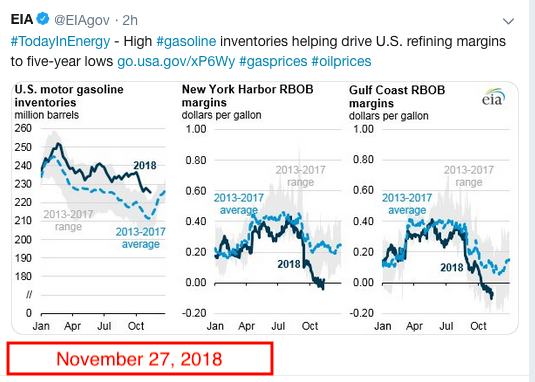 
This story is being re-posted. For the archives. Example of selective memory. First, the screenshot: 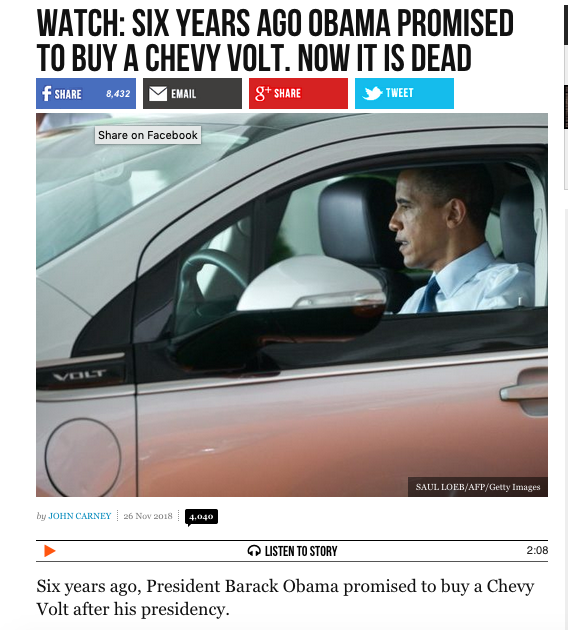 
“I got to get inside a brand-new Chevy Volt fresh off the line,” Obama announced to a cheering crowd of United Auto Workers activists. “Even though Secret Service wouldn’t let me drive it. But I liked sitting in it. It was nice. I’ll bet it drives real good. And five years from now when I’m not president anymore, I’ll buy one and drive it myself.”


GM will shut down production of Chevrolet Cruz (small car); the Volt (EV); and, several others. Stories everywhere; one link here. It appears four plants in the US will be closed, and one in Ottawa, Canada. But the number of employees -- it appears 3,300 blue collar workers at the one plant in Canada; and 2,600 employees spread across four factories in the US.

US EV sales are tracked here.

I watched ABC report this story; I don't watch evening news but I made an exception tonight to watch the Mars landing story. After listening to the ABC story I went to the internet story regarding GM. What ABC said was accurate. What ABC left out was huge. 14,000 jobs lost; about 5,900 in North America meaning that the vast majority of employees are overseas (perhaps China?). Of the 5,900 in North America, as noted above, 3,300 in one factory in Ottawa, whereas 2,600 employees spread across four plants in the US. From the ABC I had the distinct impression 14,000 GM employees in the US were being cut just before Christmas. Not even close. This is a huge GM story. It's a huge business story. It's not a huge American job story -- GM may in fact hire 2,600 new employees for their US plants. The Bolt was unveiled in January, 2016. The Volt is a hybrid, first commercial production in 2010. The Volt was showing its age and absolutely not competitive against the Toyota Prius.

Wow, the GM story, as I said earlier: his is a huge GM story. It's a huge business story. It's not a huge American job story.

This was done quickly. The usual disclaimer applies. This has not been double-checked for accuracy. Go to source of information if this is important to you.

Race to export US shale oil getting fierce. From Bloomberg.  Some data points:


Trafigura’s proposal is one of five for the Corpus Christi area that would rely on the three new pipelines coming online in 2019. They comprise the Plains All-American Pipeline LP’s Cactus II conduit, with a capacity of 585,000 barrels a day; Epic Midstream LLC’s EPIC line, with 600,000 barrels a day; and the Grey Oak line, owned jointly by Enbridge, Andeavor and Phillips 66, with about 900,000 barrels.

MAGA: with a dog in the pipeline fight (as an investor), I should be "concerned" about the ultimate winner. I'm not. I couldn't care less. Bottom line for me: America will be the bigger winner, regardless of how this turns out.

By the way, look at this graph, previously posted, and oh, by the way, it's very possible that Saudi Arabia could be a net oil importer within my lifetime. 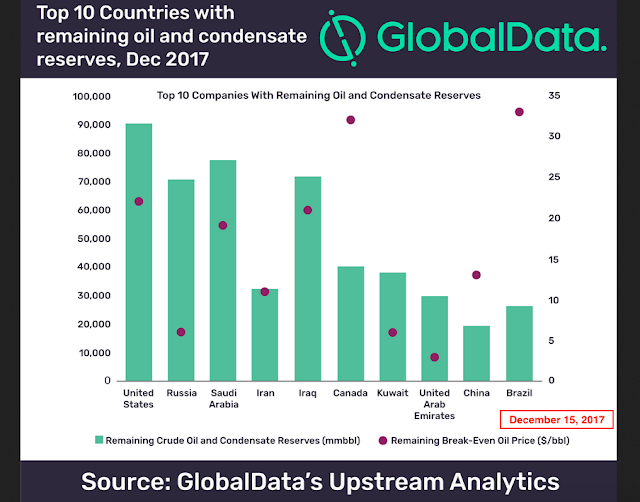 
Permian natural gas markets felt a cold shiver this week, but not a meteorologically induced one of the types running through other regional markets. Gas marketers braced as prices for Permian natural gas skidded toward a new threshold: zero! That’s not basis, but absolute price, a long-anticipated possibility that became reality on Monday. The cause is very likely driven, in our view, by continued associated gas production growth poured into a region that won’t see new greenfield pipeline capacity for at least 10 months. What happens next isn’t clear, but expect Permian gas market participants to be a little excitable or jittery over the next few months. Today, we review this latest complication for Permian natural gas markets.

Permian gas markets were sent for a spin on Monday, with prices at the key Waha benchmark averaging just $0.625/MMBtu.

This is the second lowest price we have in our dataset from our friends at Natural Gas Intelligence (NGI), which dates to 2007.

That’s not all though, as that average is based on trading throughout a period spanning roughly three hours between 7 and 10 a.m. Central Time. Prices near the end of this period traded one penny below zero at Waha.

While we’d like to tell you this was some sort of transient, one-off event that led to a day of dramatically low gas prices, that isn’t likely the truth of the matter. The Permian gas market is flooded with associated gas and won’t see significant new takeaway capacity until the start-up of Kinder Morgan’s Gulf Coast Express (GCX) pipeline in late 2019. The problem is here to stay, at least for a few months. Take a deep breath if you trade the Permian gas markets.