We Will Have To Wait For The Revised Figures To See Final Flaring Results; Somehow This Seems Fairly Trivial In The Big Scheme Of Things (NOKO Still Launching ICBMs, For Example) -- January 23, 2018

North Dakota’s oil and gas industry did not miss the state’s gas capture target in September after all, but did exceed them in October, according to revised figures from the North Dakota Department of Mineral Resources Oil and Gas Division.

Alison Ritter, a spokesperson for the Division of Oil and Gas, said the October capture rate was 83 percent in October, according to the revised figures, which was 348 million cubic feet per day. The state target is 85 percent, putting the state 2 percent over flaring limits.

But, in September, the revised figures put gas capture rate at 85 percent, which meets the state target. It had been reported as 84 percent based on preliminary figures during monthly production reports, which lag by two months. Revised numbers are issued three months later, based on figures submitted by the oil and gas companies.

So, I assume the revised figures for October, 2018, are yet to be reported.

Too Early To Tell If A CLR Buelingo Well Was Favorably Impacted By A Neighboring Frack -- January 23, 2018

It's kind of funny how things work out.

The other day I said this graphic could keep me busy for years: 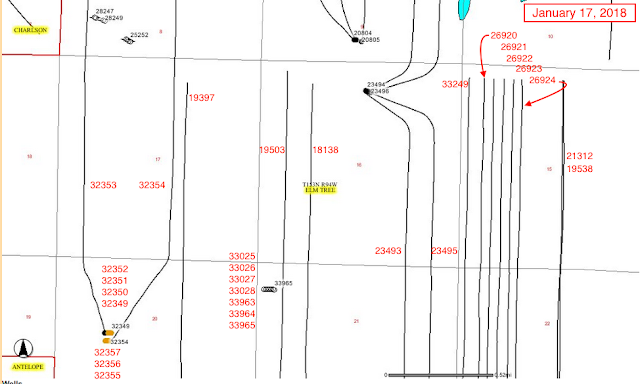 How little did I realize then how soon I would be looking at this same graphic again.

This time because this well came off the confidential list today and is on the graphic:
The obvious question: are there any older wells in that same area that might have been affected by the new well?

Two other wells in the graphic above:

Later, 5:05 p.m. CT: ironically / coincidentally on the day a reader asked about Bruin E&P, it just so happened that NDIC released the wells/permits that were transferred from HRC (Halcon) to Bruin E&P

A reader asked about Bruin in a comment elsewhere. Another reader provided additional input:


Halcon is still listed as HRC Operating at the NDIC. The transfer of wells apparently hasn’t happened yet. It will be interesting to see if Bruin starts another rig when the transfer does happen. Bruin does have a wellsite permitted and built on acreage it picked up from OXY-Limerock.


I don’t know much about Bruin’s company structure/origin. However, I have a close relationship with many of their field supervisors and personnel here in the state. They picked up some good, undervalued property with the Limerock and Halcon acquisitions.

They aim to develop this average with modern drilling and completion techniques. My main interest is the experimental Sadowsky 14 Bakken well they will be drilling just north of Dickinson. No Bakken well in this area has ever been drilled and completed using modern high-intensity sliding sleeve techniques.

Most Bakken (read Oxy/Anchutz) wells north of Dickinson were open hole “suicide” fracs in crookedly drilled holes. They are going in knowing they have undervalued acreage, with the Bakken is surprisingly thick north of Dickinson.

Bruin has some great engineers and supervisors on their team. I look forward to their endeavors going into the future.

Wow, even the Drudge Report has it in bold red.

Snowflakes blame President Trump for talking out of both sides of his mouth. Okay, whatever.

The deal for funding the government/ending the shutdown was open discussion on border security and discussion on immigration reform (euphemism for "dreamers").

Mitch McConnell agreed to have open debate in the US Senate on immigration reform in exchange for funding the government.

Now, today, one day later after the agreement, the link at Drudge is in bold red (which Matt uses sparingly), and this is the screenshot over at Politico: 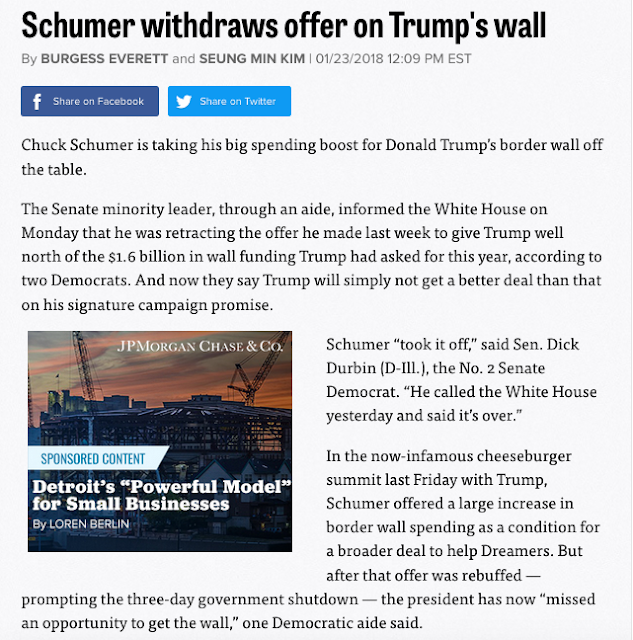 It appears that Schumer has been so chastised by his alt-left base, that he had no choice but to renege on the deal. But when the government shuts down again in three weeks, the shutdown will:
In short, it will be the shutdown the mainstream media hoped for. Remember, the $1 trillion infrastructure plan will have been announced only eight days earlier.

The US Senate better confirm as many federal judges and other political appointees as fast as it can because after February 8, 2018, not much is going to get done.

For snowflakes, cupcakes, and fruitcakes, who choose to forget this is from wiki: the Secure Fence Act of 2006 was passed by Congress and signed by President George W. Bush on October 26, 2006.
Posted by Bruce Oksol at 11:56 AM No comments:

Peak Oil? What Peak Oil? All Those Deferred Projects? Getting Off The Ground -- Bloomberg -- January 23, 2018

I can't count the number of times I've read stories and heard from folks that all the big global energy projects that have been deferred over the years will result in a huge crude oil shortfall. Maybe. Maybe not.

But now Bloomberg is reporting that all those deferred projects are finally getting off the ground.


The global oil industry’s backlog of big drilling projects is starting to shrink as prices improve.

From production vessels tapping Brazil’s deep-water reserves to pipes connecting rigs to underwater wells in China, the number of ventures delayed since the oil crash that finally got approval to get off the ground totaled 18 last year, according to a report by consultant Rystad Energy. That compares with only five in 2016 and two in 2015.

That’s a start, but there are still 104 delayed oil and gas projects waiting for investment approval, according to Rystad.

To re-cap, big global projects the past few years:
By the way:

Link over at SeekingAlpha. I believe these are all in the Eagle Ford. 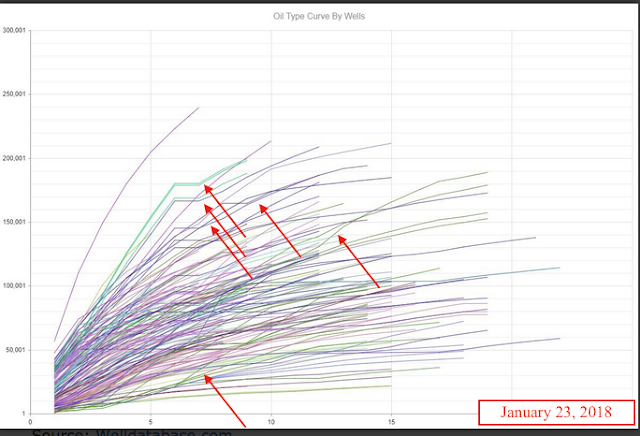 The well:
The CLR Hereford wells are tracked here.

Canadian Oil To Replace Venezuelan Crude; And Selling At A Discount -- What's Not To Like; WTI Up Solidly Over $64; Davos Continues -- January 23, 2018

Earthquake, Alaska: 7.9 magnitude, and they haven't even started fracking yet.

Talk radio: tariffs on solar cells is going to kill the domestic solar panel installation industry. President Trump walked away from the Paris global warming accord. Is there a pattern here?

Talk radio: Whirling Pool washers to increase 30% in price, from $500 to $650. Over 12 months that $150 comes to less than $15/month; it's a one-time expense; never needs repair (according to their advertising); and, last forever. Small price to pay to keep American jobs, making America great again; keeping a campaign promise. If overseas manufacturing companies are "dumping" or being subsidized by state governments, all's fair in love and war.

Putting things in perspective: will need replacing in less than a year or so 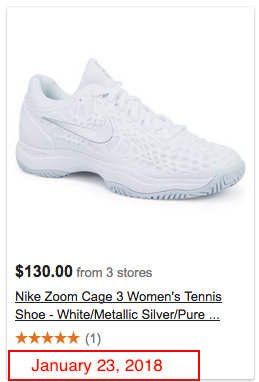 Talk radio: South Korea will build washing machine plants here in the US.

What has Davos got to say? Link here.

"A market blow-off" will be produced by stimulus fueled by cash from banks, corporations and investors, Dalio said. "If you're holding cash, you're going to feel pretty stupid," he added.

Bridgewater is the world's largest hedge fund, managing about $160 billion, according to its website. Dalio started the firm in 1975 out of his two-bedroom apartment in New York City. He is now worth an estimated $17 billion.

Disclaimer: this is not an investment page. Do not make any investment, financial, job, travel, or relationship-related decisions based on anything you read here or think you may have read here. If this is important to you, go to the source.

ONEOK, closed up about 3% yesterday:

ONEOK reiterated the average annual dividend growth in the range of 9-11% through 2021.

Notably, it does not expect to issue additional equity in 2018 and into 2019.


The recent collapse in the price of Western Canadian Select (WCS) versus West Texas Intermediate and the 12-day shutdown of the Keystone Pipeline in November 2017 put the spotlight on a major issue: Alberta production is rising, pipeline takeaway capacity out of the province has not kept pace, and pipes are running so full that some owners have been forced to apportion access to them.

Storage and crude-by-rail shipments have served as a cushion of sorts, absorbing shocks like the Keystone outage and the apportionments, but with more production gains expected in 2018-19, that cushion seems uncomfortably thin and unforgiving. With all this going on, we decided that it’s time for a deep-dive look at Western Canadian production, takeaway options and WCS prices — the whole kit and caboodle. Today, we begin a new series on Canadian crude and bitumen production, the infrastructure in place (and being planned) to deal with it, and the effects of takeaway constraints on pricing.

Despite these gains — most of which came from Alberta’s oil sands region — times are tough in the Canadian oil patch. While other North American producers have been enjoying the gradual rise in WTI pricing over the past year, Canadian producers have suffered through declining prices for WCS, the Canadian heavy blend crude benchmark — especially over the past few months. Figure 1 shows that WCS maintained a pricing discount to WTI of around $10/bbl through most of 2017 (all in U.S. dollars). Beginning in late summer, however, the WCS discount to WTI began to grow, initially to around $11-12/bbl during September and October, and then crashing during November and December to around $25/bbl.