Generally speaking, the comments over at "MacRumors" are quite snarky, complaining about anything one can imagine about Apple.

But, wow, look at the comments regarding the 42mm Apple Watch Series 4.

It's very possible, the September 10, 2018, Apple rollout:
I remember all the naysayers suggesting the Apple Watch would be a failure. The Apple Watch is at the vanguard of the "wearable" revolution. 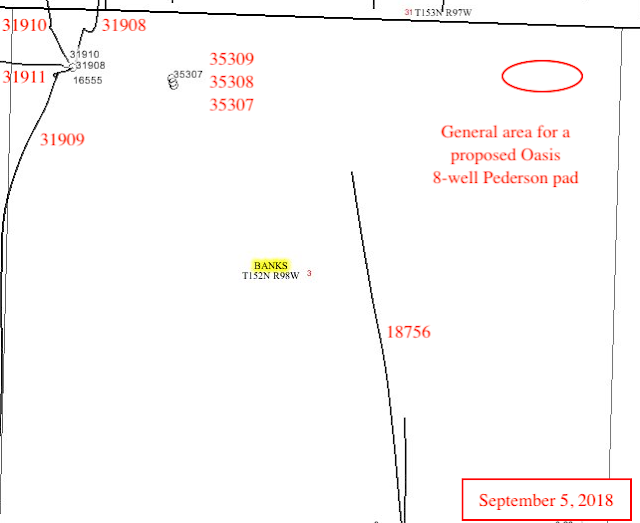 From the oil patch hotline:


The ND Industrial Commission gave the okay in August for two unusual drilling units that will cross the North Dakota-Montana state line and will cover 1,021 acres.

Denbury Resources LLC will drill the two wells in Fallon County, and extract oil from the horizontal wells in Bowman County.

The company anticipates an ultimate production (EUR) of 284,000 barrels of crude oil with drilling costs pegged at $3.1 million for each well.

Denbury is proposing to drill the wells parallel to the fault that traverses from the SW¼ of Sec. 8, T4N-R62E in Fallon County to just west of the southeast corner of Sec. 10.

According to Denbury attorney Lawrence Bender, oil produced from the wells would not be taxed by North Dakota, but North Dakota mineral owners in the unit would receive royalties.

The spacing unit is part of the original Cedar Creek Anticline No. 8-B formed in 1942.

I would assume this well is a Red River well, a very, very deep well. The Madison formation is much more shallow, lying superficial to the Bakken. The Red River lies below the Bakken.


“There is clearly a question of confidence in Canada" after a court last week overturned the Canadian government’s approval of the Trans Mountain pipeline expansion, CEO Steve Williams tells a Barclays energy conference in New York.

CBR-Canada: it's an open-book test -- from Vanguard --

CLR: Harold Hamm was just on for an extended interview with CNBC, and now I see that CLR has a September, 2018, corporate presentation at this link. I'll finish the presentation later this week, but after seeing only a few slides, the data should blow your socks off. Unless your socks are inside your Timberland Pro steel-toed boots.

Original Post
Due to family commitments, my early morning blogging will be cut short today.

To get the morning note in, I left for work at oh-dark-thirty. What an incredible bike ride. I checked my "watch" just before stepping outside the apartment door: 6:21 a.m. I next checked the "watch" just as I was entering the Starbucks door: 6:45.

Twenty-four minutes of bliss. Riding time was actually about three minutes less -- I had to unlock the bike chain, turn on all the front and back bike lights, the backpack lights, and then, at the other end, do the reverse.

But what an incredible ride. Traffic was light, but picking up. One could see the very early rosy fingers of dawn (with apologies to Homer). Already a bit warm but I did not notice how humid it was until I was actually getting off the bike.

So, in a few minutes, I will sign off for the morning. Not sure when I will post again today, but knowing me, I assume I will sneak in a post or two.

I will not get to e-mail, or comment-moderation for awhile. Likewise, typographical errors will be corrected later.

Let's check in on futures before signing off:
The Jeff and Rosie show:


Don't Bring Me Down, ELO
Posted by Bruce Oksol at 7:55 AM No comments:


Fast and furious:
Overused but I need some music to feed my brain (with apologies to Hunter S. Thompson) --


I Won't Back Down, Tom Petty

Costs to drill an oil well: from 2016, but looks pretty good.

Tariffs? What tariffs? From Reuters. China appears set to once again boost its purchases of liquefied natural gas (LNG) for the northern winter, but unlike last year's rush, this time the process is likely to be more organised and stable.

One well coming off the confidential list today (it was miserably cold and harsh in North Dakota six months ago):


The race is on to be the first to reach a Final Investment Decision (FID) for the next round of U.S. liquefaction/LNG export terminals along the Gulf Coast. And like the Kentucky Derby, being first — or, at worst, second or third — is a do-or-die proposition, because only a very small number of these projects are likely to line up the multibillion-dollar commitments needed to push them over the FID line.

The tried-and-true approach of LNG project financing has been to secure a stack of long-term Sales and Purchase Agreements (SPAs) from international LNG trading companies or huge overseas utilities, and that’s the tack being taken by Venture Global LNG, which is developing two projects near the Louisiana coast that, if built, would consume a total of nearly 4 Bcf/d of U.S. natural gas. Today, we continue our series on the next round of liquefaction/LNG export terminals “coming up” with a look at Venture Global’s Calcasieu Pass and Plaquemines projects.

This is the third episode. Earlier we reviewed the dramatic shift in U.S. expectations regarding LNG a few years back. Through the 1990s and the first two-thirds of the 2000s, U.S. natural gas production was close to flat, so the general thinking was that U.S. gas output had peaked, and that over time, increasing amounts of LNG would need to be imported to keep pace with gas demand. In 2005, the Energy Information Administration (EIA) estimated that the U.S. would be importing the LNG equivalent of nearly 12 Bcf/d by 2015 and 18 Bcf/d by 2025, and a number of LNG import terminals were built to handle the expected inflow.

It became clear by 2010-11, however, that the Shale Revolution — and the resulting boom in U.S. gas production — had eliminated the need for LNG imports. In a flash, many of the companies that had just finished building LNG import terminals started exploring the possibility of adding liquefaction plants at those sites to export LNG instead. Since then, six liquefaction/LNG export projects advanced to FID and construction — Cheniere Energy’s Sabine Pass and Corpus Christi, Dominion’s Cove Point, Cameron LNG, Freeport LNG and Elba Liquefaction — and five liquefaction trains (four at Sabine Pass in southwestern Louisiana and one Cove Point in Maryland) with a combined capacity of more than 23 million tonnes per annum (MMtpa) are up and running.

Then, we did a deep dive on Tellurian’s Driftwood LNG, a 27.6-MMtpa liquefaction/LNG export terminal planned for an 800-acre site in Louisiana’s Calcasieu Parish, south of Lake Charles.

Several aspects of Tellurian’s project bear repeating here. One is that, in contrast to the large-scale liquefaction trains now operating at Sabine Pass and Cove Point and under construction along the Gulf Coast (generally with capacities of 4 MMtpa or more each), Driftwood LNG will consist of as many as 20 much smaller, modular-based trains (1.38 MMtpa each). Also, Tellurian is acquiring natural gas reserves that will be tapped to produce gas for the LNG project, and it is developing two 2-Bcf/d long-haul pipelines (Permian Global Access Pipeline, or PGAP, and Haynesville Global Access Pipeline, or HGAP) — and a 96-mile, 4-Bcf/d connector called Driftwood Pipeline — to deliver most of the natural gas that the Driftwood trains will demand.

Most important, perhaps (and most relevant to today’s discussion of the Venture Global LNG projects), is that to help finance its project Tellurian is seeking a handful of customer/partners that would take a combined 60% to 75% equity interest in Driftwood Holdings, which consists of Tellurian Production Co. (a gas producer), Driftwood Pipeline Network (the pipelines discussed above) and Driftwood LNG Terminal (the liquefaction trains and export docks). Those stakes — at an estimated cost of about $1.5 billion per MMtpa of liquefaction capacity — would give the customer/partners equity LNG at the tailgate of the liquefaction trains at cost, with the variable and operating costs estimated to be about $3.00/MMBtu FOB (free on board — that is, with the LNG owner responsible for shipping the LNG to its destination). Tellurian will retain the remaining 25% to 40% equity interest in Driftwood Holdings, and will market its share of LNG production on its own. It also will manage and operate the pipelines, liquefaction trains and export docks.