Could Judge Boasberg be assigned another North Dakota pipeline case?

Link to the Williston Herald.

Back to square one.

Marathon had shut the line partially down after an order from the Bureau of Indian Affairs, amid claims that the pipeline has been trespassing on Native American land for seven years. Marathon was also fined $187 million in damages in connection with that decision, which the Trump administration later reduced to $4 million. [And there's the rub. LOL.]

The Biden administration, however, reviewed the decisions and vacated all of them, amid due process concerns. They sent the matter back to the regional director, with instructions to provide a full and fair opportunity for all parties to be heard — basically, square one.

Marathon, meanwhile, filed suit against the government, accusing it of violating the Administrative Procedure Act for vacating the orders without any of the required notice, as well as violating Fifth Amendment due process rights.

Wells:
Wells being brought back on line with higher prices:

We recently discontinued our monthly subscription to Spectrum television. We moved to "Hulu" and the Amazon Fire TV Stick. It was my wife's idea to move to "Hulu" and my idea to purchase a "fire stick."

Wow, every day, I thank my wife for "Hulu" and I love the fire stick. An unbeatable combination.

Because of this, I have become quite interested in streaming and the current and coming "war" among Amazon, Apple, Disney, and Google with regard to streaming. There are others, but the others will be absorbed by the former.

Amazon and Roku seem to have similar business models; both are gateways to streaming across the entire streaming universe. It doesn't requite a rocket scientist to figure out who wins that contest (Amazon  vs Roku).

Google owns YouTube TV which is sponsoring the NBA finals. YouTube TV and Hulu are direct competitors and for newbies, those are really the only two options in this arena. My brother-in-law and his tech-savvy son prefer YouTube TV to Hulu and have YouTube TV out at the Montana house.

Google is a bit like Amazon and may indeed be Amazon's toughest competitor before it's all over, but that's well down the road. But again, Google and Amazon have different business models.

Disney (which owns Hulu), Apple, and a host of others are simply providing content,. Apple does have "hardware" but somehow that hardware seems not to be working for folks like me.

Amazon's hardware, about two inches by one inch costs about $50; Apple's hardware is "laptop" in size and thousands of dollars. It's the only piece of the Apple ecosystem that seems to be both within and without, to paraphrase a line from The Great Gatsby.

Of the four, Apple is lagging, and needs "a lot" if it wants to remain relevant with regard to streaming. Their Apple TV+ is still free. I subscribe to Apple TV+ but "never" watch it, except to see what might be playing.

All four have very, very deep pockets, but of the four, Amazon seems to have the best business model.

And then, this: Amazon recently (previously posted) bought the rights to the NFL's Thursday night game. TNF is "broken." Of all the NFL games it has the lowest ratings. Fox ended its relationship one year earlier than planned to give Amazon the opportunity to get inside the NFL door. Some folks have written me to tell me that Amazon's purchase of TNF was a mistake. I disagree. Amazon has very deep pockets and they will make Thursday Night Football work. And even if it doesn't, it adds "bragging rights" for Amazon and is another arrow in Amazon's Prime Video quiver. Love it.

[In fact, re-reading this post: another story line. Apple and Amazon may be the last two standing when this is all over -- the "streaming wars." Amazon won the first NFL battle, getting TNF, but Apple could very well win the NFL war if it acquires SNF.]

So, now we get this story today.

Apple is in early talks to buy rights to NFL's Sunday Ticket games.

The NFL is not the NBA.

If Apple succeeds, I can hardly wait for the fireworks to begin: SNF and TNF. Apple vs Amazon.

It's going to be huge.

Hunch: Dallas Cowboys own Thursday night. Other than the Super Bowl, is the number one NFL game Thanksgiving Day which is owned by Dallas.

Remember the CBS Thursday night line-up year ago? My hunch: Amazon does. And so do the Cowboys.

Jerry Jones. Tim Cook. Roger Goodell. I would love to be a fly on the wall.

Maybe more if one needs more to see why this works. Quick: name the only professional sport Americans -- in general -- are eager to watch. 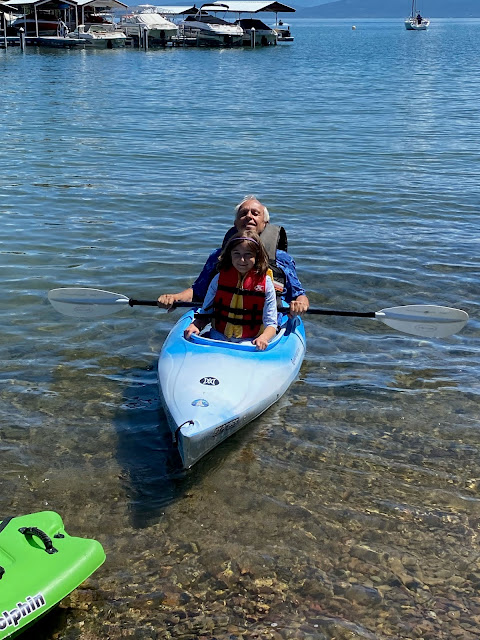 From PowerLine, more evidence of the uselessness of wind energy: 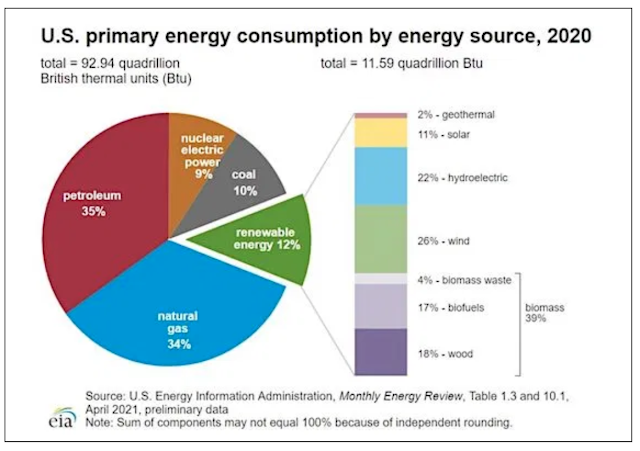 At least 60 percent of the time, wind turbines producing no electricity. 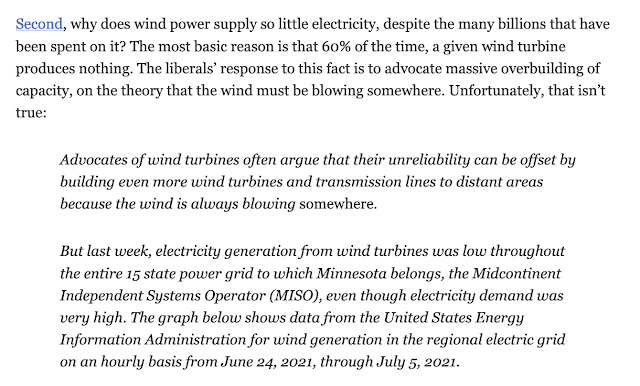 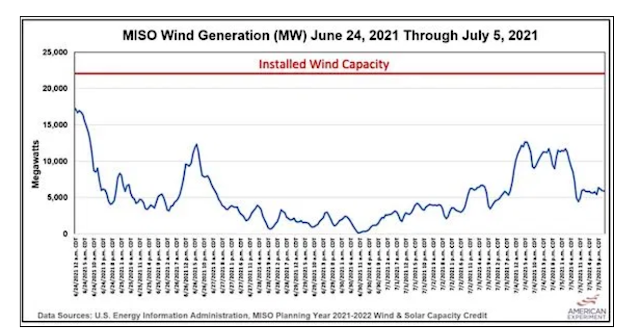 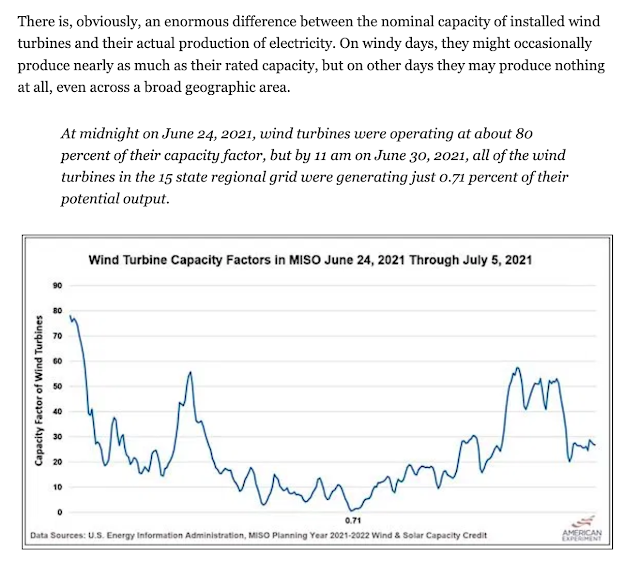 Now this: the bad news continues to come in. Forbes. Tanked again. Outkick.

There are at least seven subjects with regard to energy that we could talk about today:

6. The Mideast is getting noisy.

7. What's going on with shale?

Trading: two days ago, yes, the day before the market plummeted, I did so much trading on my Schwab account, I got a boiler-plate reminder from Schwab reminding me what their trading rules were. Schwab said they were monitoring my account but that they were taking no action to stop any trading. Interesting. I have no idea what that was all about but it certainly my attention.

And then the market plummeted yesterday. Perfect timing. Has never happened before (to that extent) and unlikely to ever happen again.

Doomed. Speaking of doom, I didn't tune in to CNBC at all yesterday. I never want to watch CNBC when the market is falling. They seem to do everything to try to make it sound worse than it really is. Yesterday, pre-market (and maybe early trading) the Dow was down over 500 points. Let's see 550 / 24,500 = 2.2%. By the end of the day, the market was down by less than one percent. But wow, all the articles posted yesterday about what this means -- the huge fall -- that we're all doomed.

Nonsense. This is an example of what I'm talking about -- we're all doomed. Link to Yahoo!Finance's anchor, editor-at-large, Brian Sozzi. What a bunch of nonsense.

It's far from a market in turmoil, but a day after stocks touched record highs it is a market getting drilled with some valid fears. The Dow Jones Industrial Average tanked nearly 500 points in early afternoon trading Thursday as investors showed concern that the plunge in the 10-year Treasury yield was signaling an economic growth slowdown later this year. Driving that potentially dreaded macroeconomic slowdown would be two factors, traders reasoned. First, the Delta variant of COVID-19 that is sweeping across the world. And two, the Federal Reserve moving to taper its bond purchases before year end. Hence, the newly expressed concerns by traders on the ever-expanding valuations in many areas of the equities market today.

So, there you have it. In three short paragraphs: we're all doomed and it's all because of the ten-year Treasury.

Nonsense. But this is where we will start. Link to Yahoo!Finance's anchor, editor-at-large, Brian Sozzi. What a bunch of nonsense.

OPEC spat #54: what this one is all about. This is perhaps one of the best articles I've read on the subject.

UNP: plummets; loses $10/share in one day. Biden upset with "monopoly-like" moats the regional railroads have. Link to The WSJ.  My hunch: Warren has already called Nancy Pelosi. They're close friends from way back.

Biden's deterioration: the meme seems to be getting louder and more frequent. I assume we will soon see an article in The NYT suggesting why that is not true.

How bad is the editing over at the NY Times: they misspelled Mrs. Clinton's first name and it was so bad, the newspaper put it in Corrections Section. Link here. Someone must have been thinking of Mt Everest.

US shale: on track for one of its best years ever. Link to Alex Kimani. Coming close to being nominated for a Geico Rock of the Year award.

California drought: yes, it's a big deal. Links and stories everywhere. Probably not a lot of talk about fracking in California these days.

Wind: more evidence of the uselessness of green energy. Over at PowerLine.

Gasoline demand: this is a bigger story than most folks realize.

Coal: coal output in US seen rising most since 1990 on global demand! Link here. See the McKinsey article that comes next  -- getting easy to start connecting the dots.

McKinsey: dream big. The world is about to enter a new age of prosperity. Great article. I said the very same thing on the blog some months ago. Covid-19 may not have been the "black swan" everybody says it's been. It may have been one of the best things to have happened since WWII. Will post again as a stand-alone post.

Usually when we write about natural gas markets in the Western third of the U.S., we spotlight the Permian Basin and its Waha gas hub. The focus on Waha has been for good reason, as the last three years have been nothing if not exciting in the Permian’s primary gas market.

The basin’s huge volume of associated gas production and Waha’s volatility and deeply negative basis — even negative absolute prices — have made the West Texas market eminently watchable. Though a flurry of new pipelines out of the Permian have helped tame the market somewhat recently and driven Waha to the point of positive basis on its best days, the markets west of the Permian are a different story. They have seen very little in the way of new gas infrastructure, and the constrained inbound pipeline capacity has recently driven prices in the Desert Southwest to some incredible premiums. In today’s blog, we take a look at the gas markets there.