I'm driving from Texas to North Dakota; left about 10:00 p.m. last night -- wanted to experience the thunderstorms and earthquakes at night in Oklahoma. The thunderstorms were not particularly spectacular but would have put cattle into a stampede in the old days. I missed a 4.0 earthquake near Medford, Oklahoma by about 12 hours. I think, at 4.0, that is one of the stronger quakes; people felt it but "no" damage. We'll see.

I'm in North Platte, Nebraska, right now.  Will be here about an hour; then press on. I will sleep along the road somewhere -- Chadron, Black Hills, Belfield, Bowman, and on to Williston.


The Hillary story:
NPR interviewed one of The NYT reporters who verified the story. NPR's initial take on the story:


Jeff Bezos decided after nine years it was finally time to disclose the financial results of his pioneering cloud business, Amazon Web Services.

And so, along with its first quarter results, Amazon disclosed that the AWS unit had revenue of $1.6 billion, up 50% from last year, and operating income of $265 million, up a more modest 8% amid growing competition from Microsoft, Google and others.

Comcast will drop Time Warner deal. Once Congress got involved, it was predictable.

Apple watch orders, shipments, apps going wild. There may not be big lines at the stores for the Apple Watch but the media is going wild with reports.  Australian customers to get first watches delivered to homes.


I'm in North Platte; will be here about an hour. Then press on.

Lots of hawks above the freeway.

If cougars are found along the North Platte river, I saw a cougar. It was a huge cat, not a dog. In the vicinity of a small herd of deer. Yes, google search -- cougars in the area.

Note: be sure to check out the update regarding the previous post (http://themilliondollarway.blogspot.com/2015/04/a-reader-asked-about-hess-well-in.html). 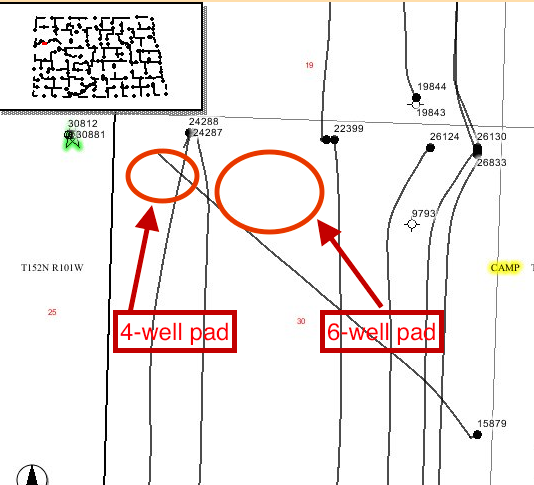 The wells in the far northeast corner of section 25-152-101 are the Oasis Andersmadson wells.

November 3, 2015: the well is back to a steady, typical decline and/or slightly choked back production profile. The February, 2015, production (almost nothing) was probably due to work on the well / pad. Now, all back to normal.

July 6, 2015: a reader provided this comment over at the Discussion Group --


The well file shows pump problems last year that was fixed, but nothing this year. Production has been pretty consistent month to month for over 2 years.  The low month in February is more likely the well being choked back to produce less due to the extreme low oil prices at that time.

See comment below. The comment about the well being choked back in February makes sense. That "ending" date of 3/07/2015 does sound suspect, as another reader originally noted. It's the exact same date as the start date (month/day) except for the year (2012 vs 2015). I bet the original reader was correct; that "2015" date was a typo and should have been "2012."

The company said the frack data would be provided later; there is still no frack data at the NDIC file for this well.

Later, 6:57 p.m. CT: this is really, really interesting. See first comment. I brought it up here so it is easier to google:

That makes sense: they did an open hole frac when the well was completed in 2012; then in 2015, a few months ago, they went back in and re-fracked it. It will be interesting to see what kind of re-frack they did. At least that's how I would interrupt it until I get more data.

Production updates will be placed in the original post below to make it easier to follow; the narrative will remain unchanged for archival purposes.

Note: this entire page was done quickly and not checked for errors. There will by typographical and factual errors. If this information is important to you, go to the source.

A reader asked about #20755 when it was noted there was "a huge jump in production between February and March 2015" according to the reader.
From the geologist's report:


"... the Three Forks & Target Zone was first seen at the end of the curve build, encountered at a measured depth of 10,890' (10,556" TVD). The Three Forks formation is directly below the Lower Bakken unconformity, with the lowermost Pronghorn Member of the Bakken absent here. ... the lateral was drilled in 220 hours.... the lateral portion of hte well was drilled with a total of 60% in the specified target zone and 100% in the Three Forks formation in a time frame of 30 days....background gas reached a pinacle at 6,611 units with average...400-2,200 units."

I don't have the production data for March, 2015. From the well file:

The most recent forms in the well file had to do with a pump a year ago: Work on the well was completed March 22, 2014, and the sundry form was received by the NDIC on April 9, 2014.

From the report a year ago: MIRU for stuck pump; resolved (either repaired or replaced; I don't understand the jargon in the paragraph; probably repaired).

This is what the production profile looked like around that time, a year ago:


The most recent production at the NDIC site:

... and there is no production data for March, 2015, at this site, and no sundry form yet scanned in by the NDIC that might explain an increase in production in March, 2015.

I did not see the frack data at the NDIC well file, but obviously the well was fracked in early 2012 based on this initial productio profile (unless I'm wrong and this well was never fracked, it's a humdinger of a naturally-fracked area):

This well is on a 2-well pad; the earlier well:
From the geologist's report:


... this well was drilled entirely within the Middle Bakken... gas appeared to be higher than indications at possum belly or flare at times throughout the well...

Note the production profile most recently, January - February, 2015 (both with about the same number of days on-line):


Amazingly, this was an open-hole stimulation/frack with 16,636 bbls of Slickwater and 298,808 lbs of Ottawa Sand.

There was a typical Bakken decline until June, 2010:

So there you have it.

It will be interesting if readers:


Drillers in oil and gas fields from Texas to Pennsylvania have yet to turn on the spigots at 4,731 wells they’ve drilled, keeping 322,000 barrels a day underground, a Bloomberg Intelligence analysis shows. That’s almost as much as OPEC member Libya has been pumping this year.

The number of wells waiting to be hydraulically fractured, known as the fracklog, has tripled in the past year as companies delay work in order to avoid pumping more oil while prices are low. It’s kept crude off the market with storage tanks the fullest since 1930. The fracklog may slow a recovery as firms quickly finish wells at the first sign of higher prices.

I am driving from Texas to North Dakota over the next few days. My blogging will be delayed. I replay to all e-mail but those replies will now be delayed.

I depend on readers to provide links to Bakken news. Keep sending the links but you may not see them posted for a few days, but I will eventually get caught up.


Trade in crude oil and petroleum products transiting the Bab el-Mandeb has increased steadily in recent years, growing from 2.7 million barrels per day (bbl/d) in 2010 to almost 4.7 million bbl/d in 2014. From 2013 to 2014, trade grew by more than 20%, with an increase of more than 200,000 bbl/d in crude oil exports from Iraq to Europe contributing to higher northbound traffic. --- EIA


Caterpillar's earnings soared more than 20 percent in the first quarter, even though revenue slipped, and the construction and mining equipment maker hiked its 2015 earnings forecast well above most expectations.

The company's profit for the quarter that ended March 31 included a pre-tax gain of $120 million from the sale of its remaining interest in a logistics business. The company also saw a nearly 6 percent drop in operating costs, to $11.18 billion.

US new-home sales slump 11.4 percent in March as sales tumble in Northeast and South.
Posted by Bruce Oksol at 9:28 AM No comments:

And the spin over at Bloomberg was in the first paragraph:Applications for U.S. unemployment benefits held below 300,000 for the seventh straight week, pointing to a rebound in payrolls after hiring eased last month.
And now we're starting to see the four-week average also rise, up to 284,500 from 282,750 the week prior.

Reuters had the same spin:  The number of Americans filing new claims for jobless benefits rose last week for a third straight week, but the underlying trend continued to point to a solidly improving labor market.


RBN Energy: The End of the Displacement – Are Net Natural Gas Inflows into the U.S. Northeast History?


The U.S. Northeast natural gas market thus far has been able to offset local production growth primarily by pushing out supply from other regions.  But recent trends in pipeline flows suggest that for the first time, net flows into the Northeast will fall to zero this summer, marking the end of displacement. Meanwhile, regional natural gas production could be as much as 4 Bcf/d higher this summer than last. The result could put this summer’s prices in a precarious position further challenging producers suffering in an oversupplied market. . Today’s blog looks at recent trends in Northeast flows and implications for prices this summer.

Back in 2009, before Marcellus production emerged as a supply source, there was almost no local production in the Northeast and inbound flows from these regions served nearly 80% of Northeast demand.

As Marcellus production grew, pipelines took on backhauls, with Northeast receipts displacing flows from traditional sources of supply in Texas, Oklahoma and Louisiana.  The pipelines bringing this gas to the Northeast either began to run empty or, when possible in the case of bidirectional pipelines, began flowing some supply in the other direction. In fact, since new pipeline capacity can take years to build, the only way Marcellus gas production could have expanded as fast as it has and remain economically viable, was by displacing existing inflows.

This local demand buffer has provided some breathing space for midstream players to develop pipeline projects to facilitate outbound exports from the Northeast. However, local Marcellus/Utica production has been increasingly outstripping demand  before enough of those projects can come online to transport surplus supplies to other market centers.

This cash dividend will be paid May 18, 2015 on all outstanding common shares to holders of record as of the close of business on May 4, 2015.

Targa Resources Partners LP announced today that the board of directors of its general partner has declared a quarterly cash distribution of 82.00c per common unit, or $3.28 on an annualized basis, for the first quarter 2015.