In light of news today regarding a refinery fire in the San Francisco area, re-posting this note from May 7, 2010, along with a comment from a reader reacting to that post. From the link:


An explosion and fire ripped through fuel storage tanks at a facility in Crockett Tuesday, sending flames and black smoke billowing into the skies and forcing the closure of a stretch of Interstate 80.

The incident began around 2 p.m. at a storage tank farm at NuStar Energy facility nestled in the hills above the 90 block of San Pablo Ave. The fire ignited the vegetation on a hillside bordering the storage tanks.

Based on the video footage and the fact that the fire department is going to let this one "burn out" on its own suggests this will be relatively "contained." Lots of smoke, but perhaps not a lot of impact.

As someone noted, this is from a parallel universe. I had not seen this until tonight: Olivia Newton John, Andy Gibb, and ABBA on ABC. Who wudda thought?

My hunch is that Shaleprofile.com estimates their numbers on pretty good data.

A reader sent this to me.

A huge "thank you" to the reader:

Their report was preliminary as the Director's Cut not out--not sure how they access the data, but oh well.

Shaleprofile only covers the modern hz production, but if you add legacy wells, of about 40,000 bopd, would put ND at something close to 1.475 MM bopd.

Dithering: LOL. Brexit will be delayed at least another year.

You know it's a slow news day when analysts are debating this issue.

I am not privy to the debate to which the good doctor refers. Having said that, the EIA reports that DUCs in US shale regions fell by 206 month-over-month to 7,740, according to a tweet. It would be nice to know the trend; a snapshot in time has no value whatsoever. At least not to me.

My two cents worth: it is virtually impossible to know exactly how many DUCs there are at any one time. Under the best of circumstances, it appears it takes about two weeks for what happens in the field to be reported to the public. With regard to quality of the DUCs, I don't have statistical data, but anecdotally, IPs for DUCs seem to be better than IPs of wells that are completed soon after they reach total depth. Certainly, DUCs are no "worse" than wells that are completed immediately.

I haven't found it yet, but I assume there's a discussion somewhere over at twitter asking how many angels can dance on the head of a pin.

For the record: I track the number of DUCs in the Bakken at this post.

It would be interesting to know who/when/where the acronym DUCs was coined. I think we had this discussion before. My hunch is that DUCs was an acronym coined by the NDIC. Just saying.

Delayed: due to federal holiday Monday, it appears reporting of some weekly data will be delayed a day. 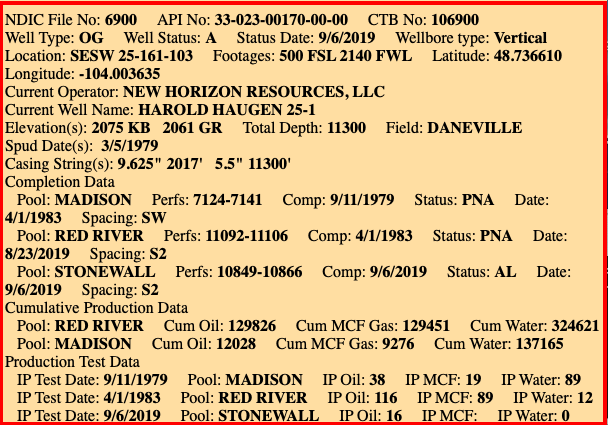 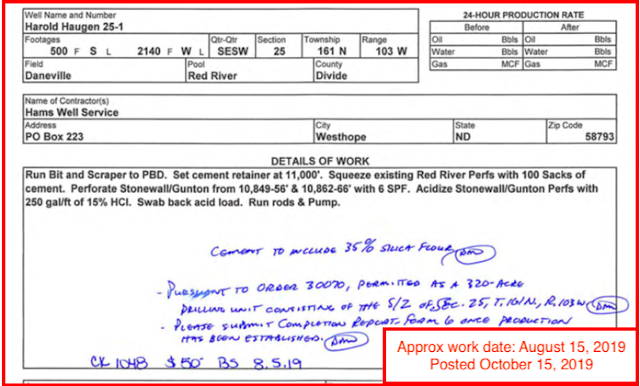 XOM / Permian: WoodMackenzie bullish. Data points, some of which may or may not be corroborated by other sources:
Fujairah: thriving. Another report; may be an old report simply re-cycled.

Permian merger: I think I saw a story earlier this morning that Jagged Peak and Parsley are merging, or something to that effect. Here it is: link here. I accumulated shares in JAG some time ago assuming someone would eventually buy JAG, but nothing happened for such a long time, I finally sold JAG; at best, broke even; probably took a loss. I see that investors are not enthused about the deal. The article said both companies were trading lower. We'll see.

Early morning trading. I must have missed something. The Dow -- showing some strength at the opening -- surged around 10:00 a.m. The Dow up almost 300 points. I wonder if JPM's 3Q19 earnings had anything to do with this? The Dow is back above 27,000.


Four wells coming off the confidential list today -- Tuesday, October 15, 2019: 45 for the month; 45 for the quarter:
RBN Energy: the latest twists and turns in US crude oil fundamentals.


U.S. crude oil fundamentals have shifted sharply in the past few weeks; some changes were fully anticipated, and others more exaggerated than originally expected. U.S. production has risen again to another record-setting high, while a massive decline in refining activity due to turnaround season — and a number of unanticipated short-term shutdowns — has erased a lot of domestic demand for crude. Meanwhile, export volumes out of a few key Gulf Coast terminals are hitting all-time marks. U.S. crude oil imports, affected by international disruptions and refining demand, have dropped like a stone and are nearing 20-year-plus lows. With School of Energy 2019 now in session, it’s a great time to recap what’s been happening over the past month. Today, we look at the summer-to-fall shift in fundamentals, and how it’s impacted overall inventories.