Oasis' Berquist wells have been fracked; they are producing some nice wells; production updated. The wells are tracked here.

WPX's Caribou wells have been updated.

WPX's Luce Evans wells have been updated; these are huge wells.

Statoil's Lougheed wells have been updated. These wells got off to a slow start but look like they are coming along nicely.

QEP's Foreman wells have been updated.

Enerplus' "Badge of Courage wells have been updated.

CLR's Mack wells have been updated. When these wells are re-fracked, we will know we are in Bakken 3.0.

Apple: great news. Counter-intuitive.China blocks some iPhone sales after granting Qualcomm an injunction: The ban does not cover the newest iPhones, which were not yet available when Qualcomm filed its patent infringement lawsuit against Apple.


Britain’s oldest coal-fired power plants prepared to fire up their hoppers for a price of almost £1,000 per megawatt-hour on Tuesday (December 4, 2018) to avert a power shortfall as temperatures across the country plunge and wind power wanes.

The cold snap ignited the winter’s first warning that Britain would run out of electricity unless idling coal plants ramp up to help meet demand for power.

National Grid said on Monday evening that there was a 100pc probability that the lights would go out within 24 hours unless an extra 2GW of power capacity agreed to help meet demand. The first negative supply forecast of the season spurred the operators of Britain’s oldest plants to offer their power at prices well above the prevailing market rates to fill the gap.

ISO New England? Link here. Spiked to over $150/MWh. Just like clockwork:
Generally, any coal use is "bad news" in ISO New England. That tells me that demand exceeds supply. Coal, as a percentage greater than 4% gets my attention. Today it was 5%. This renewable energy scam is a huge tax on middle income and the poor. The elite rich won't feel it.

California "forest" fires: For those interested in one man's opinion on the forest fires in California, Vic Hanson shares his thoughts. His post is in reply to a reader's question. It's not worth one's time reading the question, just go directly to Hanson's response. Incredibly good.

Really? This is another reason why I don't accept manmade global warming. This was one of the agenda items for the folks that are now meeting in Poland:
Reach a binding agreement that wealthy countries (excluding China and other newly rich nations) must transfer at least $100 billion annually to poor countries.
Atlantic hurricane season wrap-up: link here. Several graphs at the link. This one is interesting. If, indeed, the data is accurate it appears that there has been an increase in the number of Cat 3 storms in the last 100 years or so. But it appears the real peak was during the ten years after: 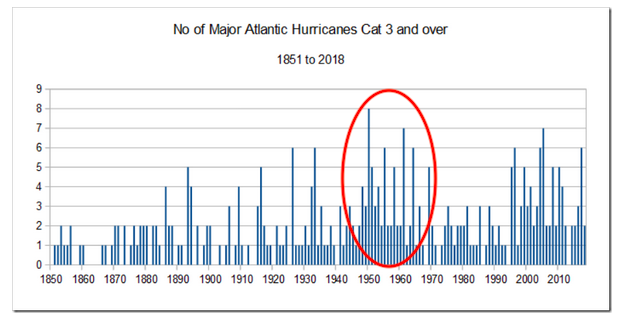 
You're A Mean One, Mr Grinch, Small Town Titans
Posted by Bruce Oksol at 3:53 PM No comments: 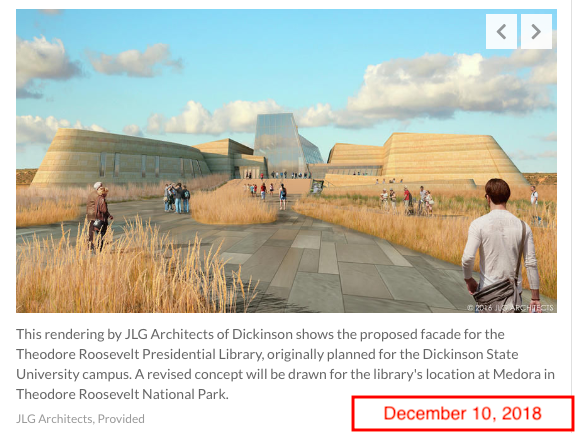 
Plans for a $150 million Theodore Roosevelt Presidential Library and Museum got a big boost from the bully pulpit in Bismarck when Gov. Doug Burgum proposed investing heavily in the project.

Burgum advocates tapping the state's Legacy Fund earnings to contribute $50 million to jump-start what he calls “North Dakota’s Mount Rushmore,” a center that would be built near a revamped entrance in Medora to Theodore Roosevelt National Park.

“We have an opportunity to do something that no other state has done,” Burgum told The Forum Editorial Board. “This would be a flagship opportunity.”

So much for the "natural wonder" of the park. LOL.

The good news for faux environmentalists: it appears the monolith would obstruct the "view" of the nearby refinery.

If lit at night, the museum would be seen from space, outshining the flaring oil wells.
Posted by Bruce Oksol at 9:36 AM 4 comments:

France: violent protests, apparently, continue. I don't follow network news and video loops are replayed and replayed on the internet, so no one really knows what is going on today. But if the violent protests in France continue, other European leaders are watching closely; there won't be much "stomach" for increasing taxes or subsidizing wind and solar energy. Are events playing out in France right now just a bump in the road for socialists; wind/solar subsidies; or, are we seeing a tectonic shift in what Europeans are willing to tolerate? I'm thinking the latter.

France: one news network says President Macron is pleading with private businesses to give their workers bonuses. It is interesting that he did not suggest that such bonuses would incur no taxes.

Gasoline demand. They must be reading the blog. For the past several months now, I've been talking about sluggish gasoline demand, which seems even more peculiar considering how inexpensive gasoline is. Now, Genscape over at oilprice is asking: is gasoline demand really slipping?

Nuclear energy. They must be reading the blog. For the past several days there has been a flurry of notes on the blog regarding nuclear energy. Over the weekend, from oilprice: are floating reactors the future of nuclear energy?

Renewable energy debate in the upper midwest (Minnesota/Wisconsin); from energynews. Some nice reporting -- lots of "in-between-the lines stuff that a lot of folks will probably miss.

Comment: a reader and I have been having an off-line e-mail discussion regarding
In response to all that, my bottom line thoughts regarding all of this:


I honestly believe that movers and shakers in and the Deep State "conspired" back around 2011 to go all out with wind and solar. Had it not been for the shale revolution, things would have been a disaster by now. Think France.

It takes years to plan and executive closure of nuclear plants. "Current events" did not happen overnight. Decisions leading up to today's events were put in place years ago. I think the crescendo began in 1994 or thereabouts but reached a tipping point on March 11, 2011. On that date, the Deep State bureaucrats had the event they needed to go all out with renewable energy, no matter how much it cost.

Cost: by the way, the cost for US automobile drivers to meet the UN global warming mandate? $240-tax/gallon of gasoline. Over at The Daily Caller. The French can't even handle $8-gasoline. Correction, December 16, 2018 -- I wish I had not forgotten to post the link. Either The Daily Caller had a typographical error, or I misread it. It's not $240/gallon tax, but rather a $240/metric tonne of CO2 -- Don did the math:

French President Macron was asking for about 25-cent-tax/gallon of gasoline, and the French "yellow vests" would not accept even that small increase. No way is anyone going to accept an additional $2.35/gallon carbon tax.

The writer of the article suggests, apparently, there is a significant difference between "relatively flat growth" and "year-on-year declines." Sounds like quibbling. Either way, it's disturbing, interesting, scary.

But one does learn something from the article. Again, unfortunately, it turns out EIA's data is based on a formula and not an exact measurement.

Genscape says their data shows that US gasoline demand is higher this year than last year.
Posted by Bruce Oksol at 9:27 AM No comments:

Six Wells To Come Off Confidential List Over The Weekend -- Morning Note -- December 10, 2018 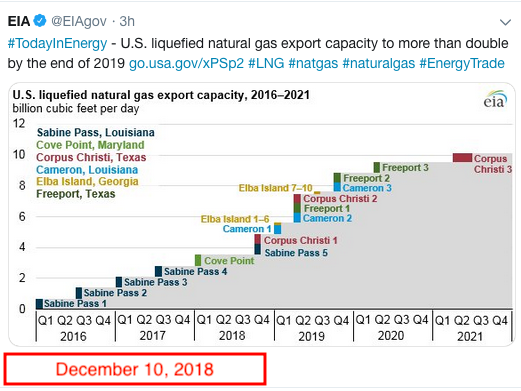 Chevron: boosts CAPEX for first time since 2014. Boosts spending on shale projects. Has been posted several times in past couple of days, but from various sources, and each source seems to highlight something new. This story from Bloomberg. It all has to do with short-cycle projects, another change for the industry brought on by the shale revolution.


The world’s third-largest oil producer by market value will increase investments by 9.3 percent to $20 billion next year, according to a statement Thursday. The U.S. will account for 38 percent of the spend, the highest portion in at least a decade, as Chevron seeks to expand its foothold in the Permian Basin of West Texas and New Mexico. The Tengiz megaproject in Kazakhstan is also a key growth area for the company.

Chevron is the first of the supermajors to detail its 2019 spending plans, which are being set during a period of considerable price volatility: Crude has lost about a third of its value in New York since early October. Meanwhile, Saudi Arabia and Russia are struggling to orchestrate production cuts as OPEC and its allies meet in Vienna this week.

Kiewit: a name familiar to those living and working in Williston during the boom. Louisiana LNG contract goes to Kiewit.
FWIW: OPEC agrees to larger-than-expected oil cut. Will take months to implement. Doesn't seem to excite oil market. WTI down almost 2% overnight; see below. The move to cut 1.2 million bopd was "not easy."

Wells coming off confidential list over the weekend, Monday --


The build-out of new natural gas pipelines in Mexico has been progressing two-steps-forward, one-step-back, and that’s been a downer for Texas producers eager to access new markets south of the border. Just a few weeks ago, TransCanada very publicly halted construction on part of a major pipeline network it has been building in east-central Mexico, citing social and legal challenges that already had caused long delays and added costs. But there’s good news out there too. Some new Mexican pipelines are finally coming online, and gas flows through them are ramping up, mostly to serve gas-fired power plants. Better yet, some important pipe and generation projects may finally be completed in 2019. Today, we discuss gas flows across the U.S.-Mexico border and zero in on recent flows through the Nueva Era Pipeline, a 630-MMcf/d pipe from the Eagle Ford to the industrial center of Monterrey.

Since the early years of the Shale Era, Mexico has been viewed as a critically important outlet for incremental gas production in Texas — first as Eagle Ford production rose from 2011 through early 2015, and then as the Permian’s output went ballistic in 2016-17. Three years ago we noted that Mexico has been opening up its energy markets to competition and, with its own production on the decline, has been becoming increasingly dependent on natural gas, LPG and refined-products imports from the U.S.

We outlined the plan by Mexico’s state-owned Comisión Federal de Electricidad (CFE) to rapidly expand its fleet of gas-fired combined-cycle generation units and to support the development of new pipelines to transport U.S.-sourced gas — almost all of it from the Permian and Eagle Ford — to the new power plants.

We’ve also provided regular updates where we noted that, after idling for months at about 4.6 Bcf/d, U.S. gas exports to Mexico at long last “broke through” the 5-Bcf/d mark for the first time ever in early July. Since then, though, it’s been idling, with Mexican imports of U.S. gas via pipeline averaging a hair under 5 Bcf/d (4.96 Bcf/d, to be exact) over the past five months.

Posted by Bruce Oksol at 6:44 AM No comments: