Wow, if you want to see why there is so much discontent in the African-American community, check out this post with regard to #BlackLivesMatter. It certainly appears that for some progressives #BlackLivesDon'tMatter -- certainly when it comes to employment opportunities. In case the link ever breaks, here is the pertinent chart: 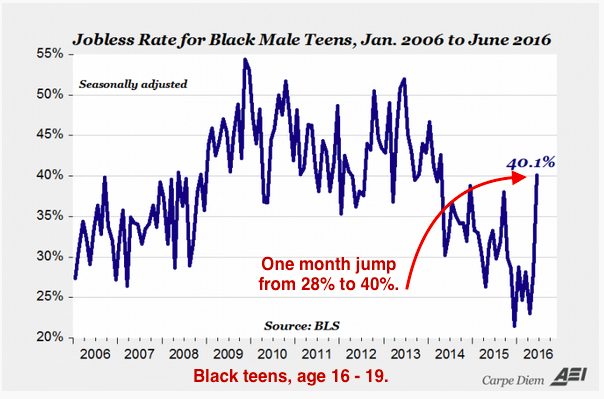 
Perhaps one of the more interesting data points from yesterday’s Employment Report is displayed in the graph above, which shows that the jobless rate for black male teens (aged 16-19 years) increased to 40.1% in June from 28.1% in May. Except for a slightly higher increase of 12.2% during the aftermath of the Great Recession, the 12% increase in June was the highest monthly increase in history going back to 1972 when the BLS starting keeping records for this series.

One possible explanation for this spike would be the “midyear burst of minimum-wage increases on July 1” outlined in a recent WSJ article.

This is quite staggering. Talk about "cause-and-effect." I wonder if anyone is paying attention?

From a WSJ "Review and Outlook" piece -- "After Dallas, Leadership, two excerpts:


What people hear most of the time from groups like Black Lives Matter or Al Sharpton is inflammatory rhetoric that distorts reality and indiscriminately demonizes the police. Showing some awareness Thursday of this lopsided public perception, Mr. Obama said it is possible to express support for the police “while also saying there are problems across our criminal justice system.” Mr. Obama’s attempt at balance might have more resonance if once he said Black Lives Matter’s view of American justice is wrong.

In suburban Minneapolis this week, the officer identified as shooting Philando Castile is named Jeronimo Yanez, who is apparently Hispanic. But here is Minnesota Governor Mark Dayton’s contribution to cooling the racial flames: “Would this have happened if the driver were white, if the passengers were white? I don’t think it would have.” That is a profile in political fox-holing.

#BlackLivesMatter: the movement is a terrorist movement and the group is nothing more than the evolution of the 1960's Black Panthers.

Later: after posting the above, I came across this article -- El Paso police chief -- #BlackLivesMatter is a "radical hate group."  The group is unlikely to be targeted, tracked, investigated until Comey, Lynch, Obama are off the scene.

From Ben Shapiro: The Left: Don't blame Black Lives Matter movement for violence of a few. But blame all cops for a few shootings we won't wait for evidence on.
Posted by Bruce Oksol at 8:44 AM No comments:

I may be misreading this but I don't think I am. From a New York Times story this morning:


The good news is that doesn’t appear to be the case. The blockbuster 287,000 jobs the Labor Department reported employers added in June surely overstates the pace of improvement, just as surely as the miserable 11,000 jobs reported to have been added in May understated it. (The May number was originally reported as an almost-as-miserable 38,000.) A Verizon strike contributed to the seesaw, but most of it is probably driven by a mix of sampling error and the sometimes weird effects of seasonal adjustment.

The writer blames the "miserable" May jobs number on:
I can think of other explanations.
Posted by Bruce Oksol at 8:24 AM No comments: