Random Update On The Tara Jo Wells in Reunion Bay

As pointed out by a reader:
In that same spacing unit:
In case you all missed it, the Tara Jo wells have each produced in excess of 110,000 bbls of crude oil each, and they haven't reached the 6-month anniversary yet (at the time of the original posting). Remember the good old days in the Bakken, when a 100,000 bbls by the end of the first 12 months was impressive?

I always find it amazing how one's mind works (or doesn't work). I honestly did not consciously recall the sisters' names, but something about Tara Jo reminded me of that classic (or not), "Petticoat Junction" series. Now I know why: the three sisters (which I had to look up at wiki: Betty Jo, Billie Jo, and Bobbie Jo). My subconscious mind actually stored some of this stuff all these years. Deep, deep subconscious.

I guess the Scandinavian equivalent of Petticoat Junction in the Bakken is Johnson Corner.

You know, had they combined "Petticoat Junction" and "The Beverly Hillbillies" into a one-hour show, we would have been well on our way to the first crude-by-rail sitcom.


The Beverly Hillbillies
Posted by Bruce Oksol at 7:20 PM No comments:

Wells Coming Off The Confidential List This Past Weekend, Monday; Four (4) Wells Make The High IP List; Many Outstanding Wells Being Reported

Wow, we're "sailing" now; there are going to be some very nice wells reported tomorrow.

For the archives, for my granddaughters. I never knew where the terms long ton, short ton, etc., came from.


In the Proto-Indo-European ancestor language of English, the original word for 12, similar to that of 11, meant "two over." This meaning is carried into German as well as English, although replaced with "two [more than] ten" in Romance languages. In Germanic tradition, 12 is the basic unit of measurement, as in 12 pence to the shilling, 12 troy ounces in a pound of gold, and 12 inches in a foot. This was true in early times, as can be observed in Old Norse, which even uses "12 and 3" in some instances to mean 15. The primacy of 12 was firmly established in much of Europe by Charlemagne in the eighth century.

I am sharing this book with my older granddaughter; it is filled with odds and ends like the above, as well as some neat tricks for multiplication and division. For example, I'm sure everyone else knows this, but I never thought about it before. If multiplying 36 x 25, just add two zeros to the "36" to get 3600, and then divide by 4 to get 900.

Of course, calculators are now used and permitted to be used everywhere but these little tricks might impress some geeky nerd at some little middle school social event. Laugh out loud. The 10-year-old granddaughter doesn't show much interest, but the 7-year-old does. She asked me if she can take my books to college when I die. Seriously. I can't make this stuff up.
Posted by Bruce Oksol at 6:36 PM No comments:

First Full Month Production From This QEP Grail Well Not Yet Reported; Still On Confidential; Better Get A Cup Of Coffee: This Is A Long Post


But it gets better. I suggest that readers over the age of 65 with a heart condition should be sitting down:

These two wells are on the same pad. There is a third older well on the pad:

The initial Three Forks zone to be targeted was set at 9 feet thick.

Now it gets really, really interesting:

When it came back on line, look at what it produced in 6 days: 11,183 barrels. Either it was re-fracked (?) or fracking the other two wells on the same pad made a huge difference. [Later: Don points out that it's possible that the wells were placed on a pipeline and the chokes were wide open; or similarly, the tanks on the pad would have been empty after four months of being off-line and they could have opened the choke to fill the tanks. Also note the significant change in the natural gas to oil ratio.]


Prior to being taken off-line, for whatever reason, it was producing "only" 5,000 bbls/month.

And, if you have read this far, one more tidbit. Note: this well was taken off-line for four months. I forget, but a company, I think it was Triangle Petroleum, just mentioned that it can leave wells on-line while simultaneously fracking wells on the same pad. Not that it makes much difference, I suppose, when a well will be producing for 35 years in the Bakken, for individual mineral owners it has to be nice when a well is not taken off-line for several months.

This, obviously, has a number of story lines. Maybe we will know more tomorrow.

There are four other completed QEP wells in this section.

Memo to self: go back to the file report and note the QEP discussion about commingling; should be posted.
Posted by Bruce Oksol at 10:48 AM 3 comments:

Somewhere around 2008, EOG started announcing in their public statements that they were going to turn their focus from natural gas to oil. I can't remember if I actually posted a note when they first started talking about that switch, but I remember the "talk" vividly.

Back on April 24, 2010, an individual posted elsewhere noted the same thing:


They have publicly said for the last couple of years that they are switching their focus from gas to oil and that they are working on several horizontal oil plays in addition to the Bakken and the Barnett Combo. However, they would not publicly comment on those plays until they were ready as they want to lease acreage before any public announcements.

By the way, that particular post is interesting for any number of other reasons. But I digress.

As I was saying: somewhere around 2008, EOG publicly announced they were changing their focus from natural gas to oil. I believe at that time, more than 50% of EOG's revenues were from natural gas (I could be way wrong on that, but I certainly saw EOG primarily as a natural gas company, something akin to Chesapeake).

So, how has EOG done? How well has EOG executed this plan? This caught me by surprise: look at slide 3 of their 2Q13 earnings presentation:

Disclaimer: this is not an investment site. Do not make any investment decisions based on what you read here or what you think you may have read here. I post this data because it helps explain the Bakken and/or put the Bakken into perspective.

Some other random data points from that presentation:

This is a portion of Slide 12 of the presentation. Note that production in the Bakken is leveling off; compare this to the Eagle Ford: 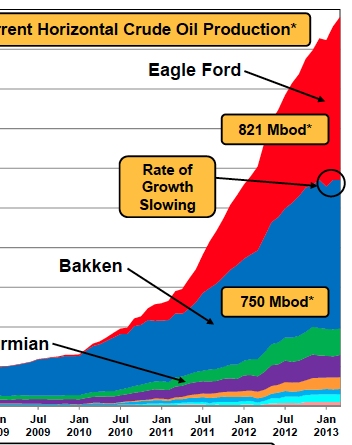 The question is whether the rate of production in the Bakken will increase once the delineation of the Three Forks is further along.
Posted by Bruce Oksol at 9:45 AM 4 comments:

This is simply some housekeeping for me. I don't expect there to be anything new.

There was quite a bit of talk about the "Leonard" in EOG's most recent earnings call. It's probably been mentioned before but it was new to me. A quick google search doesn't provide a lot of specific information.

But drilling down, these are my thoughts.

First, the Mid-Continent Oil Province is made of hundreds of oil fields from Kansas south into Texas.

There are several basins within this "oil province."

One of the basins, of course, is the Permian Basin in west Texas.

Within the Permian Basin there are other basins including the Delaware Basin and the somewhat smaller and shallower Midland Basin was just east and the much smaller Marfa Basin was to the southwest.

In slide 31 of the recent EOG presentation, one sees the Delaware Basin, almost identical in shape to the Midland Basin which is just to the east.

In the past, I simply separated out the "Permian" as one of the big three: Williston Basin (Bakken), West Gulf Basin (Eagle Ford), and the Permian Basin (multiple plays).

But unlike the Williston Basin and the West Gulf Basin, it appears the Permian Basin is going to get more attention by operators as they delineate the various smaller basins in this larger Basin.

The Oil Drum has a nice essay this morning. Be sure to read to the very, very end.


In this regard it is well to remember the case of Poland, where the presence of gas-bearing shales led to predictions that the industry would “transform Europe.” But then the results of the well tests came in, and the volumes of natural gas available were reduced by up to 90%. Although 40 wells have been drilled, to date none are reported to have produced commercial quantities of natural gas, although in only four cases was there fracking of the horizontal well section. Three major oil companies have backed away from committing to the program, and that initial enthusiasm is now considered to have been a “bubble,” while Chevron is seeing more protests over their planned fracking tests.

This collapse of hope for a potential resource has led the Polish Government (responsible for ensuring that the country has enough fuel at a viable price) to move back toward the greater use of lignite as a power source. Coal is the fuel for the power stations that produce 90% of the country's electricity, and lignite is readily and cheaply available. Prices for lignite (a brown coal that is softer and not yet fully geologically morphed into the harder black coal most envisage when coal is discussed) are quoted as giving a price of $2.00 per gigajoule, roughly a fifth of the cost for black coal. The country has large deposits of lignite, much of which is available for surface mining, at relatively low financial cost.

The government decision underscores a point that I have made a number of times, namely that as other fuel costs increase, more and more countries will move to the use of coal where it is domestically available and relatively inexpensive in financial cost to produce.