Tribal elders have been trying for months to resume work at both fields, which could add some 400,000 barrels per day (bpd) of crude, doubling Libya's current output.

Unconfirmed postings on social media suggested there had been progress in the talks but Mohamed El Harari, spokesman for state oil firm NOC, said the fields were still closed.

An oil source at the western Zawiya port linked to the El Sharara oilfield said there were efforts to reopen the 340,000-bpd field but so far there was no breakthrough. An engineer at El Feel also said there was no sign of output resuming. The two oilfields have been shuttered by salary demands from security guards and the country's conflict between the two rival governments vying for control of the north African OPEC state.

The key word in that story: tribal.

The entire Arab Mideast is tribal. See first comment at this post. Folks talk a lot about Saudi's external threats (terrorists, Iran). If things become dire for Saudi Arabians because of $60 oil for a prolonged period of time, be prepared for internal tribal conflict/warfare. The House of Saud may have bigger worries internally than externally.

I think a lot of folks still get upset when they hear President Obama talking about global warming. His speeches on this subject and actions regarding global warming are for one purpose only: a Nobel prize. A Nobel prize trumps everything. Once one realizes his laser focus on a second Nobel prize, it explains everything.
Posted by Bruce Oksol at 11:02 PM No comments:

Six (6) producing wells were completed:
*All four of these wells are on 1280-acre spacing, but in fact the laterals themselves are about the typical length of a short lateral. This is in context of the recent 2Q15 earnings / conference call in which EOG spent a lot of time discussing completion techniques and optimum length of horizontal laterals. See graphic: 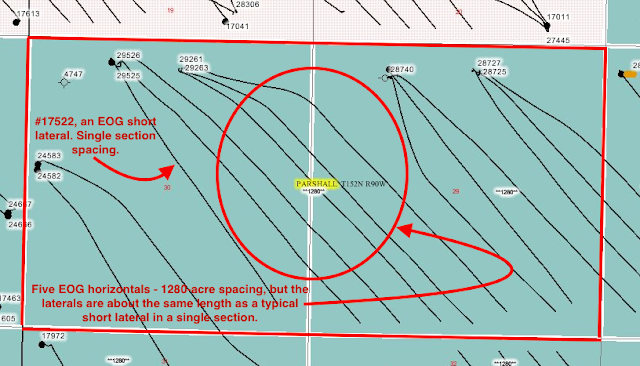 In the graphic below, note the proximity of several Petro-Hunt multi-well pads to Petro-Hunt's monster well.

I couldn't get it all to fit in, but the 3-well pad in the far lower left corner is a conundrum. One of the wells will run into the Keene oil field. Directly south of the 3-well pad is Keene field, but this portion of Keene field is "owned" by SM Energy. That Petro-Hunt horizontal will not be running directly south of the pad. However, one section to the west (not shown in the graphic) is a 1280-acre drilling unit operated by Petro-Hunt, so it looks like the horizontal "Keene" well on that 3-well pad will swing to the west and then south. I don't know; just conjecturing on little information available. The Oil & Gas Journal is reporting:


Crude oil production in September from seven major US shale plays is expected to decline 93,000 b/d to 5.27 million b/d, according to the US Energy Information Administration EIA previously projected a 91,000-b/d decline for both July and August.

In the Permian, meanwhile, EIA projects a larger increase for September than it projected for August, forecasting a September rise of 8,000 b/d to 2.04 million b/d.

So, the big three among the oily plays, the Bakken, at 1 million bopd; the mostly oil play, the Permian at twice that, at 2 million bopd, and the oily/gassy play, the Eagle Ford right in between at 1.5 million bopd.
Posted by Bruce Oksol at 3:56 PM No comments:

A reader alerted me to an ABC television trailer for a new series coming to television this fall with the word "Bakken" somehow associated with us. This is what I wrote the reader who was the first to send me the link:

The best part is the "new millionaire every single day."  Which is probably about the only accurate thing about the series / television trailer.

Thank you. I would prefer not to link it, but I know I will get a gazillion e-mails telling me about this. I had not seen it. Yours was first. Thank you.

I'll post the link if I receive more than 5 more folks writing me about it. Thank you.

Okay, now back to the serious.


The Silicon Valley automaker is losing more than $4,000 on every Model S electric sedan it sells, using its reckoning of operating losses, and it burned $359 million in cash last quarter in a bull market for luxury vehicles. The company on Wednesday cut its production targets for this year and next. Chief Executive Elon Musk said he's considering options to raise more capital, and didn't rule out selling more stock.

The New York Times is reporting that the "Olympics" needs to rethink the format for the 2016 summer games based on Katie Ledecky's "Ledecky Slam."


On the eighth day, Katie Ledecky was supposed to rest. So the text message she sent in the hours after her fifth gold-medal swim of the 16th world championships caught its recipient, Scott Leightman, by surprise.

Ledecky told Leightman, the director of communications for USA Swimming, that she planned to be at Kazan Arena by the start of Sunday morning’s preliminaries to cheer for her teammates in their final races. Did he need her for any public obligations?

In 2014, Ledecky finished the summer as one of only two Americans ranked No. 1 in the world in individual events. Michael Phelps was the other.

By Sunday’s unofficial end to the 2015 long-course season, Ledecky and Phelps, who clocked the fastest times in the world in his three events at the concurrent United States championships in San Antonio, again held the top spots. Four other Americans were No. 2 in their events: Ryan Lochte (200-meter individual medley), Nathan Adrian (with an American record in the 50-meter freestyle), Connor Jaeger (with an American record in the 1,500 freestyle) and Maya DiRado (400 individual medley).

In two world championships, Ledecky, 18, is nine for nine in finals. Over the past 24 months, she has broken 10 world records. Swimming has bestowed upon Ledecky an embarrassment of riches, and she goes quietly about doing whatever she can to give back. She brings attention to the sport without resorting to picking a Twitter battle with an absent rival, as Chad Le Clos of South Africa did in the case of Phelps.

Ledecky charmed her hosts last week on her way to becoming the first swimmer to sweep the 200-, 400-, 800- and 1,500-meter freestyles in a major competition. A Russian boy proclaimed himself Ledecky’s No. 1 fan until he discovered he was talking to her brother, Michael. “Number two fan, then,” he told him.

Ledecky broke her 1,500-freestyle record on consecutive days in front of crowds that enthusiastically cheered her on. She had to strike while she was rested because she will not race the event again in a major meet until 2017, at the earliest. After Ledecky’s performance, the exclusion of the 1,500 freestyle from next year’s Olympic program has never seemed more ridiculously retrograde.

A real breath of fresh air.

So much more at the link.

See Katie break the 800-meter freestyle record in Moscow at this video: http://swimswam.com/watch-katie-ledecky-break-the-800-free-world-record-race-video/. Also from the link:


KATIE LEDECKY!!! WOW! I am out of words after watching Ledecky destroy her own World record in the women’s 800 freestyle, posting a time of 8:07.39. She went out after hit, and it was evident with her splits. She flipped at the 400 meter mark at 4:03.22; a time that was still faster than everyone else in the individual 400 freestyle earlier in the week. She lowered her record by 3.61 seconds, becoming the first woman ever under 8:10.

Initial production numbers have been posted for wells coming off the confidential list over the weekend, today.

This data comes from Energy Information Administration (EIA) monthly crude rail movement estimates that began publishing in April 2015 (see A Look At The Rail Track Record). Because the EIA does not break this data down within PADDs we assume that it largely covers CBR movements between North Dakota and West Coast refineries located in Washington State and California. This assumption is based on the location of rail loading terminals in PADD II (most are in North Dakota) and rail unloading terminals on the West Coast that are mostly linked to refineries in Washington and California.

Having made that assumption we further separated out CBR shipments to California from North Dakota (red shaded area) that are reported separately by the California Energy Commission (CEC).

The CBR shipments to Washington (blue shaded area) are simply the EIA PADD II to PADD V totals minus California. Note also that shipments to California are a fraction of the total – just 2-5 Mb/d in 2013 and 2014 and (according to CEC) have been zero since November 2014. So West Coast CBR from North Dakota is almost all headed to Washington State. The yellow line on the chart against the right axis is the ANS premium to WTI crude. ANS – Alaska North Slope - is the West Coast benchmark crude and West Texas Intermediate – WTI crude is the Midwest benchmark.

To sum up – West Coast CBR shipments from North Dakota remain firmly routed in supplying Washington State refineries for the moment. As such – the shipments will expand if and when Shell gets their permit – but only by 65 Mb/d or so. There is also a good possibility that one or more of the rail to marine port terminal projects in Oregon or Washington will eventually be built – that could increase Bakken crude shipments to California. There is also likely to be a slow increase in CBR shipments to California as unload terminals there are permitted – but pipelines such as the Inland California Express may overshadow these in due course. For the moment there is no apparent end of the line for CBR shipments from North Dakota to Washington refineries.

Much, much more at the link. Bottom line: could the Bakken become the option of choice for out-of-state oil for California refineries?

Note: ANS – Alaska North Slope - is the West Coast benchmark crude and West Texas Intermediate – WTI crude is the Midwest benchmark.
Posted by Bruce Oksol at 11:43 AM No comments:

KMI announces that it has begun to receive Powder River Basin volumes into Double H pipeline system via a newly constructed connection near Douglas, Wyoming, for crude oil deliveries to Guernsey, Wyoming, increasing its system capacity to almost 100,00 bopd.

Previous posts on this subject:

Refineries running all-out. I don't know about you, but I find this quite exciting -- 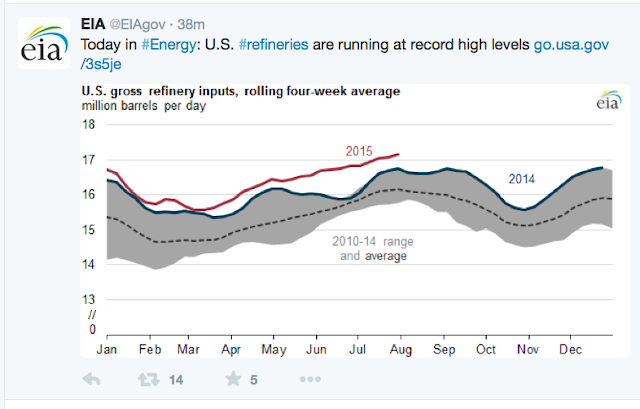 Some points to consider:

If refineries are running at record capacities, with really low price of oil / gasoline, how are gasoline stocks doing in the US? From a Jack Kemp posting, August 10, 2015: 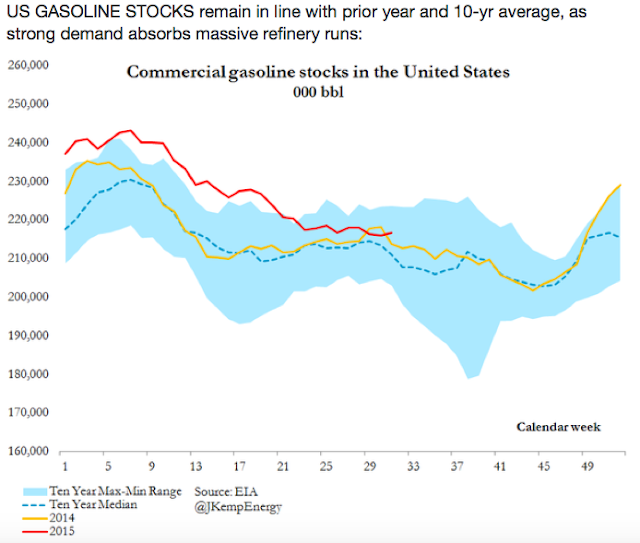