There are so many "huge" stories in the Bakken, the all tend to run together. I can't "put my arms around" 10,000 gallons of LNG, but when a company announces they will increase production of "anything" from 10,000 units to almost 80,000 units, that has to get the attention of someone. This seems like a pretty big story.


The only processing plant in North Dakota that converts natural gas byproducts into motor fuel is planning to increase its capacity.

Located outside Tioga, North Dakota LNG began processing gas last September and is approaching the facility’s second phase of development. The company recently completed an expansion that will increase its processing capacity from the original 10,000 gallons per day up to 76,000 gallons per day.

The plant is located adjacent to Hess Corp’s gas processing facility and utilizes the methane produced there. North Dakota LNG uses a process which cools the methane using extreme temperatures (approximately negative 250 degrees Fahrenheit) to convert the gas into a liquid state. The liquid allows for easier transportation to different locations where it will then be converted back into its gaseous state.

Wouldn't it be a hoot if T. Boone Pickens (Clean Eenrgy Fuels) and Jim Cramer (CNBC) did a newscast from Tioga, oil capital of North Dakota?

Oh, my bad! It's already been done, LOL:

By the way, look at that 4-well pad in the background: I think there are 16 oil well tanks and two water tanks. Also note: all four pumps are pumping. On a wind farm, maybe 1 of four wind turbines would be turning on any given day. 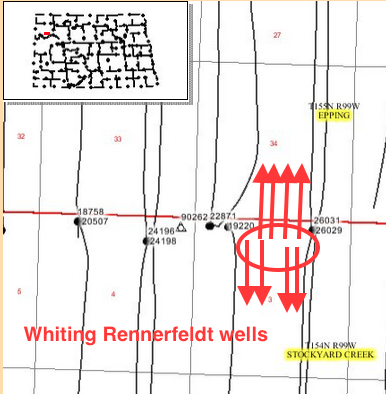 The P Earl Rennerfeldt wells:
The P Lynch wells (to the west, in the same section) are tracked here.

The Los Angeles Times is reporting that gasoline has jumped one dollar / gallon in Los Angeles over the past month.


That's made gasoline much more expensive here than anywhere else in the nation — an average of $3.44 for a gallon of regular as of 7 a.m. Wednesday, according to price-tracker GasBuddy.com. Hawaii is the only other state with an average price above $3 a gallon.

Drivers in Los Angeles are paying an average of $3.54 a gallon to fuel up, more than any of the other 443 metropolitan areas tracked by GasBuddy.

And five days ago, this article:


LONG BEACH, Calif. (AP) — Gas prices are soaring in California in a classic example of supply and demand after an explosion stopped gasoline production at an Exxon Mobil refinery while another remains offline due to labor unrest. 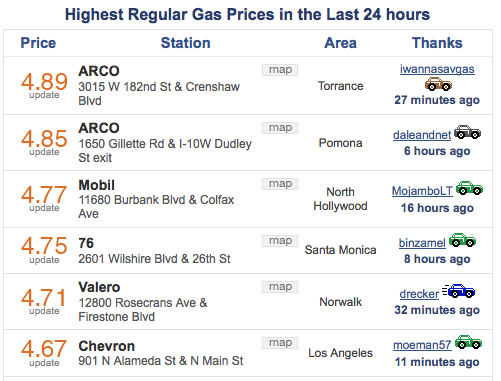 Email ThisBlogThis!Share to TwitterShare to FacebookShare to Pinterest
Labels: $5Gasoline


Oil prices fell on Wednesday after U.S. crude stock builds were more than twice levels forecast, although prices held off recent lows after Saudi Arabia's oil minister said he expected prices to recover soon from the selloff of recent months. U.S. crude stocks jumped by 10.3 million barrels last week, the government said, versus a Reuters poll calling for a build of just 4 million barrels. While the Cushing, Oklahoma hub for U.S. crude saw less supply than expected, it was still the eighth straight week of builds and record highs for total inventories. 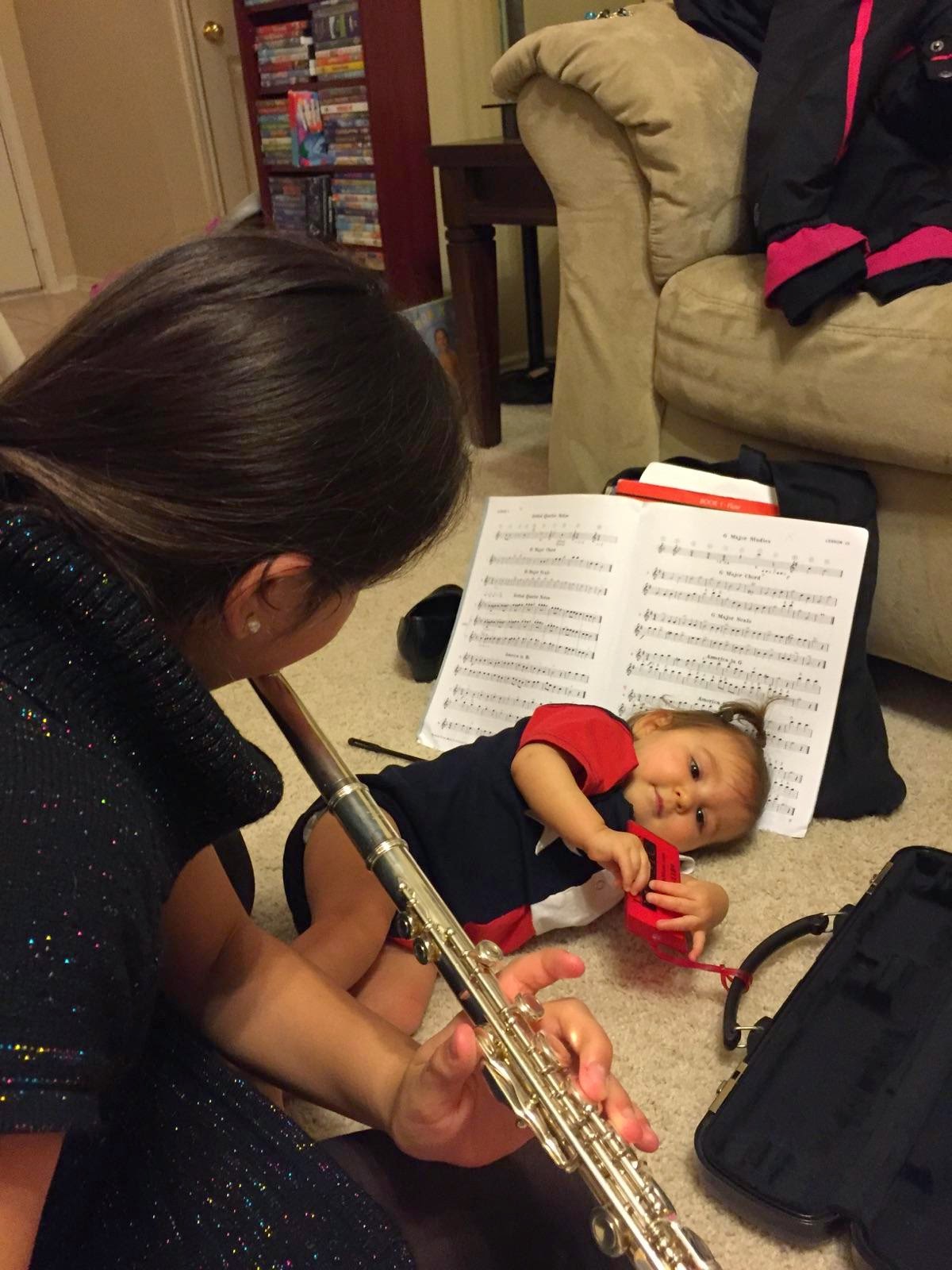 She can creep / crawl anywhere she wants; she chose this spot.
Posted by Bruce Oksol at 10:41 AM No comments:

For newbies. I'm seeing this all over the Bakken. Generally speaking, on big wells, the second and third months (or the first and second full month of production are huge, and rising; the decline does not start until the third or fourth full month of production and although it can be significant, is generally not this extreme). In addition, most new wells are on-line the full month (30 days / 31 days). It was unusual -- when oil was priced at $100/bbl -- for a big well like this to go off-line this fast (to 8 days in January, 2015) and produce so little. The specific well is not important.

Production profile for a well that comes off confidential list today:

LOL. I rode my bike to Starbucks today. When I left this morning, the temperature was temperate and there was only a bit of mist. Now, rain is pouring down and the weather forecast suggests it will last all morning. Gonna be a very wet ride home. I must have fallen for that global warming hoax today -- thinking it was going to be warm and sunny all day -- that's what the Agore Weather Channel said.

Someone told me long ago, there's a calm before the storm,
I know, it's been coming for some time --


Have You Ever Seen The Rain, CCR
Posted by Bruce Oksol at 9:04 AM No comments:

Look at the increase, being reported now:


Oasis Petroleum Inc. announced today that it has priced an upsized underwritten public offering of 32,000,000 shares of common stock for total gross proceeds (before the underwriter's discounts and commissions and estimated offering expenses) of approximately $409.6 million. Oasis intends to use the net proceeds of this offering to repay outstanding borrowings under its credit facility and for general corporate purposes.  Oasis granted the underwriters a 30-day option to purchase up to 4,800,000 additional shares of common stock. The offering is expected to close on March 9, 2015.

Earlier this morning, the press release:


Oasis Petroleum Inc. announced today that it has commenced an underwritten public offering of 25,000,000 shares of common stock. Oasis expects to grant the underwriters a 30-day option to purchase up to 3,750,000 additional shares of common stock.  Oasis intends to use the net proceeds of this offering to repay outstanding borrowings under its credit facility and for general corporate purposes.

Or are these two separate offerings? If so, wow?

With 100 million shares currently outstanding, it seem an additional 40 million shares (rounding) is fairly significant. On the other hand, if these are two separate offerings, 40 + 30 = 70. Almost 70 million more shares being offered? I honestly don't know. More to follow, I'm sure.

This is just idle chatter, for my use only to help me understand the Bakken. If this information is important to you, go to the source -- perhaps your broker or your astrologer. See disclaimer. This is not an investment site. Do not make any investment, financial, or relationship changes based on anything you read here or think you may have read here.


Exxon Mobil Corp. sold $8 billion of debt in its biggest bond offering ever and the largest energy-related deal since the plunge in crude prices that began in July.

The world’s largest oil company by market value boosted the deal by about 14 percent after previously marketing $7 billion of debt.

Irving, Texas-based Exxon issued the securities as a combination of fixed- and floating-rate notes in the seven-part sale.

To put this in perspective, Apple raised about $6.5 billion in a bond sale in February, 2015.
Posted by Bruce Oksol at 8:48 AM No comments:

See disclaimer. This is not an investment site.

From the Oasis press release:


Oasis Petroleum Inc. announced today that it has commenced an underwritten public offering of 25,000,000 shares of common stock. Oasis expects to grant the underwriters a 30-day option to purchase up to 3,750,000 additional shares of common stock.  Oasis intends to use the net proceeds of this offering to repay outstanding borrowings under its credit facility and for general corporate purposes.

January's private payrolls, meanwhile, were revised upward to 250,000 from the previously reported 213,000.

I guess analysts were counting on the Keystone XL being approved. LOL.

[Note: after posting the following, a reader sent me a Forbes article that said the same thing: neither Al Sharpton nor Warren Buffett like paying taxes.]

Warren Buffett is one of the most famous, and certainly the richest, proponents of raising taxes. What is less often remarked upon is that he is also a leading proponent of delaying tax payments as long as possible.

In the latest and largest example, Mr Buffett’s Berkshire Hathaway has been able to defer $61.9bn of corporate taxes, the company revealed in its annual report.

We've talked about this before:

This figure — about eight years worth of taxes at Berkshire’s current rate — is a reminder that Mr Buffett understands how putting off the moment when taxes are due gives him more money today to invest elsewhere.

It is also a reminder that a savvy approach to taxes has always been a feature of Mr Buffett’s career, even as Berkshire has grown to become one of the biggest corporate contributors to the US Treasury.

The total of deferred taxes reported by Berkshire for the end of 2014 is more than five times the level of a decade ago, following Mr Buffett’s move into more capital intensive businesses, with the acquisition of BNSF railways and a string of US power companies.

President Obama's FCC reins in America's internet; will regulate the internet as a utility using Ma Bell rules from the 1930's.


The IRS is delaying the refunds of tens of thousands of Obamacare enrollees, said Nina Olson, the National Taxpayer Advocate.

The hold up, she says, is subsidy data from state health exchanges.

What's more, Olson said the IRS told its telephone representatives not to tell callers the reason for the delay.

Obamacare enrollees received subsidies based on their estimated income for 2014. Now that they know their actual income, the IRS has to make sure the initial subsidy amount was correct.

Warren's advice: owe taxes; don't pay ahead to get a refund.
Posted by Bruce Oksol at 7:40 AM No comments: