August 7, 2017, T+199: Trump gets a B+ based on economy performance. Considering this comes from the anti-Trump, liberal press, this is quite remarkable -- obviously an A+ from a fair and balanced analyst. Another record-setting day on the Dow and S&P 500.

August 5, 2017, T+197: UN votes $1 billion sanctions on North Korea; largest in history by UN on North Korea. I do not recall ever seeing BOTH Russia and China supporting the US on anything of this nature. And it was initiated by the Trump administration.

August 2, 2017, T+194: with Gen (ret) Kelly moved to WH Chief of Staff, there is a vacancy at Homeland Security. Reports: Rick Perry being considered. Good move. Perry is in over his head at Energy; he had no clue (nor did most Americans) that DOE was a nuclear energy department, not an "energy" department. I'm not even sure Perry knows how to spell "nuclear" but he would know something about the illegal border crossings along the Texas international border.

July 31, 2017, T+192: Trump works 24/7. One wonders what Trump will do now that Congress begins their August recess? Later: did I read that Mitch McConnell delayed the Senate recess for two weeks?

July 22, 2017, T+183: the US is hitting on all cylinders; and, the press is talking about the sitting president of the US pardoning Donald Trump.

July 20, 2017, T+181: this will be the talk of the town this weekend. US Senate: 52-46-2 just went to 51-46-2 with Senator McCain out of action. This pretty much puts everything on hold. McCain won't quickly give up his seat; if/when he does, Arizona governor still needs to appoint a replacement. Two words: Kelli Ward. Please, oh, please, oh, please, Maxine Waters for president, 2020! ROFL.

July 19, 2017, T+180: President Trump hits his 6-month anniversary. Time to rally. Unto Ohio. With regard to ObamaCare: the most disillusioned are probably the Democrats: they know ObamaCare will implode; they wanted Trump to own ObamaCare Lite when it, too, imploded. Schumer said the patient (ObamaCare) was dying and that Trump/GOP failed to save the patient. I think Schumer forgets: true Republicans/Libertarians don't want the patient (ObamaCare) to survive. The big losers if ObamaCare not repaired: all the blue states that expanded Medicaid. Sure, Medicaid is costing the federal government a lot of money, but it can always print more money. The states cannot print money to cover the increasing costs of Medicaid. President Trump unhappy having been misled by Attorney General Jeff Sessions. Stock market: all three major indices hit all-time record highs on President Trump's 6-month anniversary.

July 18, 2017, T+179: stock market opened lower mostly due to Goldman Sachs earnings but then plunged when VP Mike Pence started talking about ObamaCare repair again -- repeating a litany of "facts" -- with no announcement of any success -- 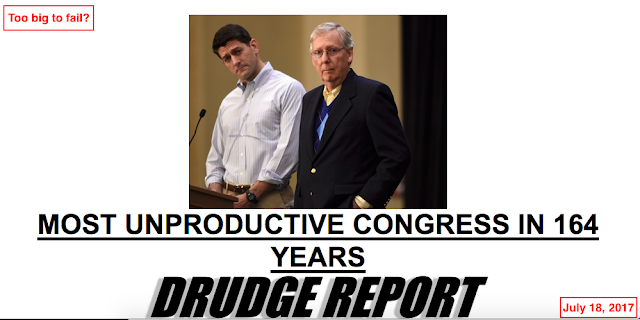 July 17, 2017, T+178: lots of TV time given to President -- executive order -- "Made In USA Day/Week." Steve Forbes has it right: GOP better press ahead with huge tax cut (tax reform); forget about CBO deficit projections; forget about ObamaCare repair. Americans like ObamaCare ("no pre-existing conditions"); they don't care about the deficit; they like tax cuts. Paul Rand could be held singly responsible for loss of US House if he doesn't get on board. ObamaCare Repeal is dead. The Dems will make a big deal out of this but at the end of the day, good, bad, or indifferent, ObamaCare is owned by the Dems. It will die on the vine; a lot of states will drown in their Medicaid debt.

July 15, 2017, T+176: Senator McCain has surgery to remove small clot above right eye. He's 80 years old. Will convalesce in Arizona for another full week. Delays vote on healthcare bill. Then Senate goes on vacation. Bottom line: GOP healthcare plan dead for this year. The "bad news": so is any chance of tax reform.

July 13, 2017, T+174: we are being told Don Trump, Jr, met with someone out to destroy our country, and yet, who let that cockroach into our country in the first place? Well, no other than President Obama, and it took "special" permission. LOL. Speaks volumes about our previous president. And John McCain? Well, there's always John McCain... 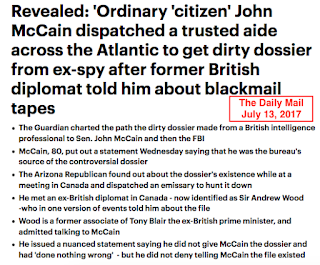 July 12, 2017, T+173: this morning I heard the new "Russian stuff" reported by the anti-Trump talking head on CNBC. It was such a convoluted story, it will have no impact on American public unless press is able to condense it into 30-second sound bite. Robert Mueller will run with this however. Will go nowhere. Market agrees. Futures up significantly after Trump son goes on Hannity to answer questions. Most noteworthy: CNBC does not mention the "Hannity" name. LOL. Curiouser and curiouser:

July 9, 2017, T+170: James Comey, fired FBI director, as bad as Hillary when it came to classified material. What a dingbat.

July 8, 2017, T+169: by every objective measure the US is in better shape today than it ever was under the Obama administration. One can start with the jobs data or unemployment data. Records of improvement being reported every week.

July 3, 2017, T+164: tea leaves suggest CNN could have its credentials pulled from the White House briefing room: Trump probably doesn't like heckling in his own house.

July 2, 2017, T+163: the former president is again showing his true colors, worried about Americans showing too much patriotism. Indonesian or Kenyan, but not American.

July 1, 2017,  T+162: I'm sure BLM is percolating somewhere in the background, but it's interesting that we've heard so little from BLM now that President Obama is out of office.