The four links that are background:
This all started with my "original note" the other day.

When looking at a "global warming - coal" site, the numbers did not seem to add up. Not the "actual" or "literal" numbers but the "metaphorical" numbers. The authors suggested that great headway was being made in decreasing the global use of coal (for whatever that is worth). Actually, they didn't state that: they said that the number of coal units operating around the world for for the first time in 2018

At this website, these data points:
The "theme" of the article: coal is being phased out. Activists are making great strides in stopping the use of coal to generate electricity.

But the numbers certainly don't support the narrative.

But even worse, my hunch is that the authors are understating the amount of coal that will be used in the out years.

Look at this story coming out of Germany this past week (from S&P Global, same link as above), with this lede:

Germany has announced grand plans of exiting coal and the world will be watching to see if its coal phase-out will be a model for the rest of the world, including Asia, to follow.

So, the analysts are comparing Germany with Asia, asking whether the German model can be used by Asia.

Comparing Germany with Asia is like comparing raisins with watermelons.

Let's start here. Comparing Germany's coal use with China (much less all of Asia) is ludicrous.

Currently, Germany's 50MW of electricity is less than 5% of China's 1 million MW. So, give me a break. 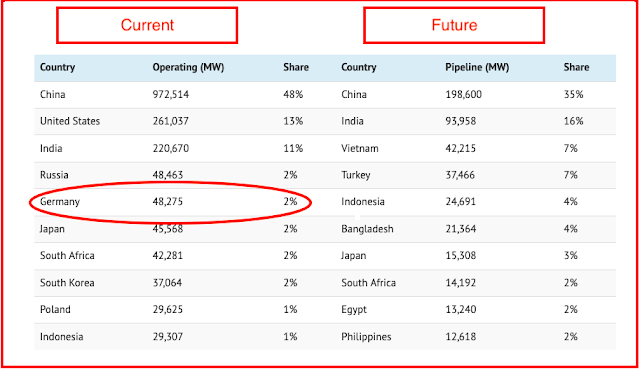 Add in India, South Korea, and Indonesia, and Germany's share is less than 4%.

Now look at this. Same chart, but look at the future / the pipeline: 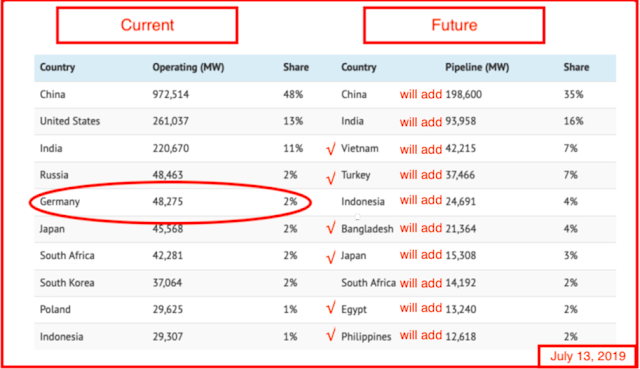 Even before we get started, China has in the pipeline, almost 200,000 MW of coal -generated electricity.

But this is what is worse, and the analysts conveniently ignore it: the "future/in pipeline" list is entirely different than the "current" list. Look at all the Asian countries and subcontinent Asia countries that make the list:
China's "pipeline" exceeds Germany's current coal-generated electricity by almost 4x.

There is already plenty of literature suggesting that India will actually need more coal-generated electricity than is currently "in the pipeline."

Bottom line: it does not matter to me one iota why Germany does what it does, but to say their actions will save the world is ludicrous. If one says that Germany is setting an example, that's ludicrous. Germany accounts for two percent of global-coal-generated electricity, and even if the country did nothing with regard to coal, that percentage would drop even further in the out years, as Asia brings on even more coal-generated electricity. In fact, Germany right now could do nothing with regard to cutting its coal consumption but still have bragging rights that the country will account for less than 1% of global coal-generated electricity in the out-years.

The authors at carbonbrief.org argue that renewable energy is (becoming) less expensive than coal. Right now we have a glut of natural gas (and a glut of energy, in general for that matter).  Who's to say that this will be the case ten years from now? If natural gas is unable to keep up with demand, the fallback position is ... coal. Everything I read suggests that renewable energy will become more expensive over time, not less expensive. Availability of rare earth elements is just the beginning of the bad news.

It is obvious that "no one" really takes the global warming scare seriously. Even the authors of the carbonbrief.org article appear to be giddy with excitement with the coal story they promote. In fact, the numbers simply do not support their narrative.

To suggest that the German "model" could be used by Asia: simply ludicrous.

In response to a Sierra Club story in which it was stated China/Asia would build 2,000 new coal plants over the new 20 years, a reader commented:


Asia may easily add a 1000 more coal fired power plants during the next 20 years, but they will also be adding NG or LNG, nuclear and some junk wind and solar.

No way will 2000 new coal plants be built in the world in the next 20 years. Unlike 99% of energy pundits I expect wind and solar to peak out in the next five years. By then it will become obvious that renewables can't work without storage, and storing sufficient renewable electricity will cost at least five times as much as generating it.