Saudi Arabia is getting ready for the twilight of the oil age by creating the world’s largest sovereign wealth fund for the kingdom’s most prized assets.

Over a five-hour conversation, Deputy Crown Prince Mohammed bin Salman laid out his vision for the Public Investment Fund, which will eventually control more than $2 trillion and help wean the kingdom off oil. As part of that strategy, the prince said Saudi will sell shares in Aramco’s parent company and transform the oil giant into an industrial conglomerate. The initial public offering could happen as soon as next year, with the country currently planning to sell less than 5 percent.

The sale of Aramco, or Saudi Arabian Oil Co., is planned for 2018 or even a year earlier, according to the prince. The fund will then play a major role in the economy, investing at home and abroad. It would be big enough to buy Apple Inc., Google parent Alphabet Inc., Microsoft Corp. and Berkshire Hathaway Inc. -- the world’s four largest publicly traded companies. 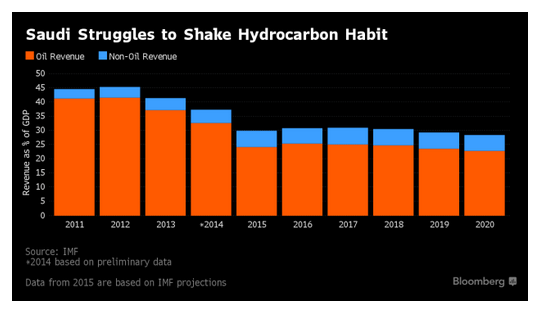 Original Post
It's being reported that Shell wants to sell some/all of oil producing assets in the North Sea, including it's Brent field. The story is here.

There are very few comments but this one is interesting:


Saudi Aramco should buy all of Shell. Then turn around and sell the global reserves (Saudi doesn't need more oil that's harder to produce than its own). The proceeds from the oil will equal or exceed the costs of the whole Shell company, which means Saudi Aramco gets Shell's refineries, petchem plants and other downstream physical assets at no costs.

At least one other comment suggested Saudi Aramco was a player.

With Shell and Saudi Aramco recently splitting up their midstream/downstream assets in the US, presumably to make it easier for Saudi Aramco to monetize its assets, one wonders if the comment above "holds water."

I find it all very interesting.

Also, note that in an earlier post (the same link as above):


After the split, Saudi Aramco wants to buy more US refineries. Reuters is reporting:


Saudi Arabia's national oil company wants to buy more U.S. refining and chemical plants to expand its footprint in the world's largest energy market once the break-up of its joint venture with Royal Dutch Shell Plc is complete.

Officials from Saudi Refining, the downstream arm of Aramco, told employees following the announcement that the state-owned firm was intent on buying more assets once the Motiva break-up is finished.

I find it "hyperbole" to suggest Saudi Aramco would buy Shell, but at least "everyone" is on the same page when it comes to talking about Saudi Aramco acquiring more refining and chemical plants around the world.

For the record and for comparison, enterprise value (in round numbers):