I talked about US gasoline consumption earlier (at this link); looking for gasoline demand record this calendar year

US commercial crude stocks continue to rise, but perhaps at a slower rate: increased another 2.3 million bbls last week; now at +63 million bbls (+13%) over 2015 level; the graph needs to be reset

US refinery throughput accelerated last week to 16.2 million bopd, up by one-half million bopd (+3.2%) compared with 2015

US distillate consumption is finally back within the 10-year max-min range; but very, very low consumption

John Kemp also had several slides showing Saudi Arabia reserve assets in free fall as well as other data points suggesting the crude oil slump is having a very, very big impact on Saudi Arabia. I think we will get a better feeling just how severe the Saudis think this is when the April 17, 2016, meeting is held.

I find this graph particularly interesting; many, many story lines: 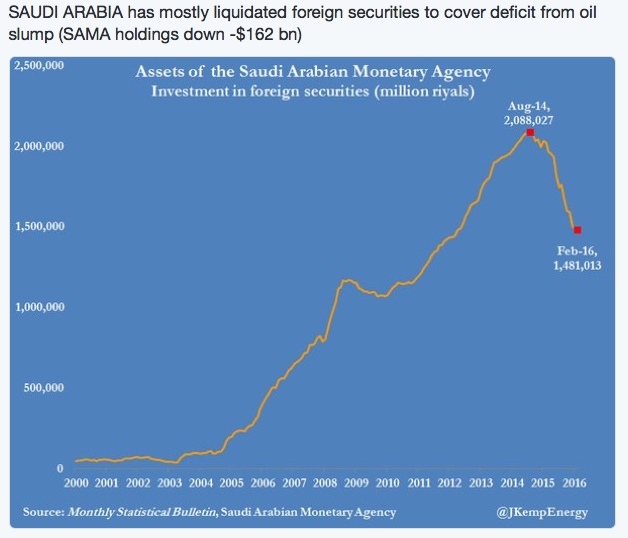 The feud between Apple and the FBI apparently goes back many years, maybe as far back as 2008, it seems I've read somewhere. Whatever.

The FBI, no doubt, was really, really peeved when Apple would not help them with the most recent high-profile case, the San Bernardino terrorist shooting. Not only was FBI peeved, they were made to look inept not being able to hack a simple telephone.

But now that they have the "key to the magic kingdom" -- or at least access to the Israelis who have access to the "key" -- it looks like the FBI is going to make the most of it. The headline in tonight's Los Angeles Times on-line edition:

This particular iPhone may hold evidence in an Arkansas murder trial.