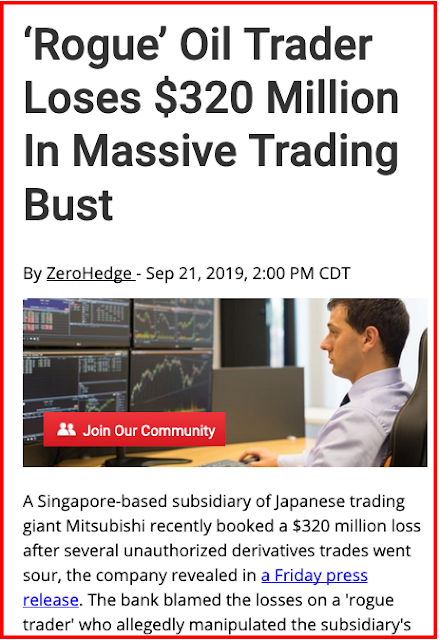 I don't have time to expand on this, so pretty much verbatim from a reader this past week:

Following the attack on Saudi Arabia (two days earlier, on a non-trading Saturday, 1.4 billion barrels of US light sweet crude was traded on Monday, two days later, first trading day after the attack.

Link: https://www.cmegroup.com/market-data/volume-open-interest/energy-volume.html. Contracts for  for 1,000 bbls.


Hover over the bar graph and it shows total trading volume was at 3.68 million contracts, or 3.68 billion barrels of crude...that doesn't even include the 517 million options to buy or sell crude contracts that also traded Monday.

When I suggested to the reader my thoughts on the trading he replied:


More than likely it's just a lot of speculators trying to make a quick buck on the wild swings in oil prices...it looks like about 3 times the normal volume of trading on quiet days, so I'd have to guess that a lot of funds that normally don't trade oil regularly were in there buying or selling...3.68 billion times $60 oil with over a 15% swing in prices during the day means a lot of guys lost their shirts, while others bought their babies a new pair of shoes..

The point I usually make when i mention this is that it's the speculators in New York and London who control the price of oil, just based on the shear volume they trade electronically, compared to the physical quantity available...

BTW, this was an all-time record amount of trading.

The reader will expand on this in "Focus on Fracking," which will be updated this evening.

That's the price of unlimited Amazon music streaming. One can also get it for free and probably get 90% of the Amazon music library, but if you want it all, it will cost $8/month. For that price you can listen to the music on any Echo Dot in the house, but if you want to hear it simultaneously on all Echos in the house, one needs to pay another $10 (or something like that; we don't have that) for the "Family Plan."

I don't know if it's worth it or not. How would I know? All I know is that whatever I ask Alexa to play, she finds it for me and plays it for me.

Occasionally she doesn't understand what I'm saying and it takes a couple of times to get what I'm looking for, but that's actually a bit of the allure, I suppose.

Today, I was reading an essay on Robbie Robertson in the weekend edition of the WSJ. While reading the article, I asked Alexa, "Play Robbie Robertson." Unlike YouTube there will be no commercial interruptions and the entire library will play. It will last longer than I will be in the house this afternoon.


Somewhere Down The Crazy River, Robbie Robertson
Posted by Bruce Oksol at 12:25 PM