Folks following this story might read between the lines: Oasis, having sold some of its non-core assets in North Dakota to raise cash to buy very expensive acreage in the Permian now says "Bakken is still the company's focus."

It will be interesting for the next twelve months or so to see how the Permian plays out for Oasis, what with the takeaway issues; high cost of completions; and, lack of infrastructure.

From The Williston Herald

Earlier this year, Oasis sold some of its Williston acreage and bought a $946 million position in the Permian’s Delaware Basin.

That works out to a pricey $46,600 per acre, and, at the time, was the most expensive entry yet to the Permian on a per-acre basis, according to analysts. One question that company’s officials heard a lot since acquiring that costly acreage is: What does it mean for the Bakken?

Vice President of Operations for Oasis Petroleum, Jason Swaren, had an answer for that question during the Bakken Conference and Oil Expo.

“Ninety-five percent of our total hydrocarbon production comes from Bakken assets, and only 5 percent comes from the Permian,” he said. “From our company perspective, I cannot stress enough how important the Bakken is to our company.”

WTI-Permian spread has been as much as a $15 deficit for Permian oil, while Bakken has been commanding a slight premium.


What Don't You Want, Come Hell or High Water

On a more pleasant note, this is interesting. Oasis saw a potential conflict next year with development of the new Williston airport impacting development of an "Oasis" oil field in the same area. So, Oasis, on its own and shouldering the cost of building the road, procured a right of way that would allow folks to access the new airport without being impacted by oil activity. From The Williston Herald:

A new development that [airport director Anthony] Dudas was excited about is construction of a new access road to the airport, which began Tuesday. The project is not part of the XWA construction itself, and was spearheaded by Oasis Petroleum as a means to allow residents to avoid the development the company will be doing in the area within the next two years.

According to Dudas, Oasis procured the right of way and are constructing the road at their own cost, with the city stepping in to cover the cost of laying gravel and paving the road.

"It's really a great public/private partnership," he said. "and a cost savings to the city. It's really a positive safety outcome as far as improving the road to get out here."

See this post to see where airport will be located.

This graphic suggests where Oasis is likely to be developing wells near the airport over the next couple of years, and where the new access road is likely to be: 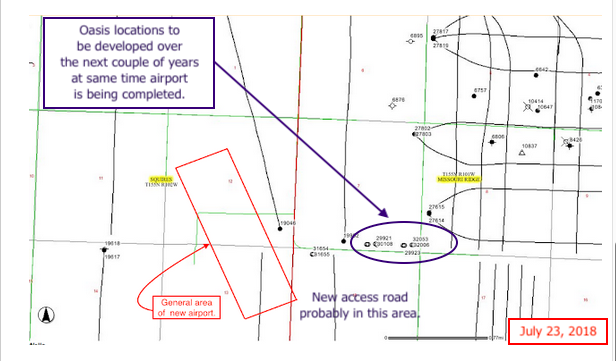