John Kemp Never Fails To Provide Graphics Worth A Thousand Words -- May 11, 2016; Pay Attention To Saudi Arabia; China, US More Of The Same; India Could Surge

The takeaways from this graphic are amazing. 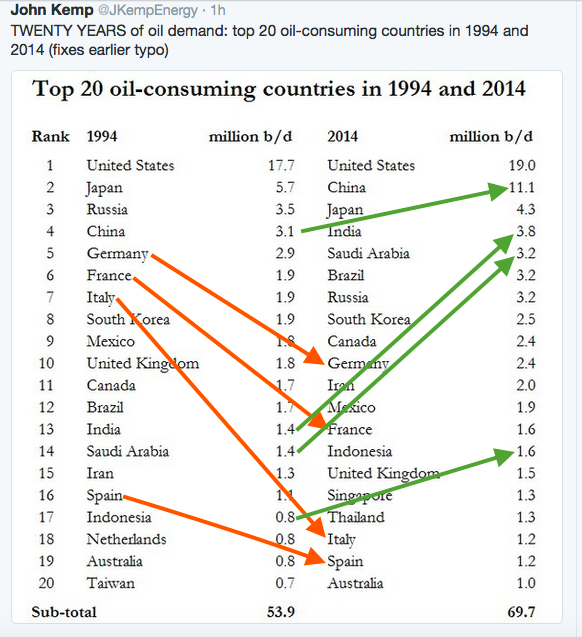 One could argue that energy usage reflects economic growth.

If so, it looks like France has become a great place to lay out in the sun sipping margaritas, slurping lattes at sidewalk cafes, or visiting museums for those who are wary of the solar energy/melanoma connection.  But look at Italy: not only did it drop down the list, but look at how big that drop was: from 1.9 to 1.2 million bopd (almost a 40% drop from 1.9). I doubt this was due to Italy going to wind and solar.

To some extent, the decrease in Europe reflects increased solar and wind energy, but the numbers are such, and the trends in the US, China, India, Indonesia, and Saudi Arabia are such that it appears that oil demand is more about economic growth and less about where one's energy comes from.


India's consumption today is where China's consumption was 20 years ago. Think about that. India is the most populous country on earth and middle class is growing.

Saudi Arabia's growth has been incredible; this puts Salman's strategic plan in perspective; don't bet against him is the takeaway.

Saudi jumped from #14 to #5 on the list, where Germany is today.


Saudi Arabia's growth far exceeded that of Iran. Iran has faced a number of headwinds during the past decade, but that could change over the next twenty years as Iran becomes the leader in the Mideast.

Salman recognizes that, and thus his economic plan. Salman wants to construct petrochemical plants and refineries to exported finished hydrocarbon products to the rest of the world. He has said that he wants Saudi Arabia to be the energy "manufacturer" for Europe. Saudi Arabia sits astride three continents: Africa, Europe, and Asia. At 30 years of age, he's young, aggressive, and has the ego of Steve Jobs, it is said. In addition, it appears that, like it or not, Europe will be a Muslim continent thirty years from now. Opportunities for investors are endless.

The next set of data points we need: oil demand per capita. That's where Saudi Arabia will blow away the others (numbers rounded, and otherwise manipulated), number of people / bbl of oil / day: