For the archives, atmospheric CO2 (CO2 Now), a dynamic link: 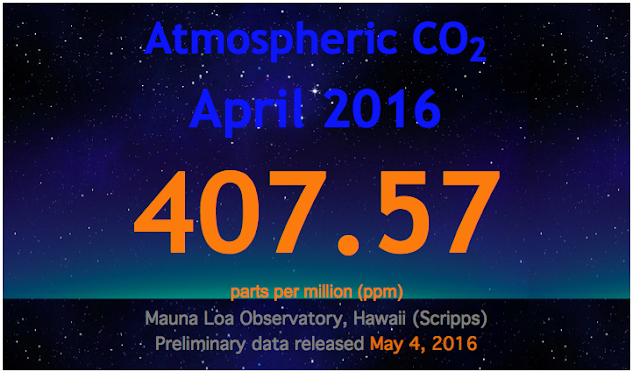 Norwegian explorer Roald Amundsen took three years in the early 1900s to complete the first successful navigation of the Northwest Passage, the ice-choked arctic sea route connecting the Pacific and Atlantic. Only in 1944, did a ship make it through in a single year.

This summer, the Crystal Serenity—a 820-foot-long, 13-deck cruise ship with a casino, a movie theater, six restaurants and a driving range—is planning to steam through in less than a month.

Operated by Los Angeles-based Crystal Cruises LLC, the trip sold out in three weeks, with some 1,000 would-be passengers paying about $22,000 each. That price doesn’t include such extras as a $4,000 helicopter ride along the way, or a three-day, $6,000 excursion exploring the Eqip Sermia glacier in Greenland.

About 200 ships have traversed the 900-mile route since Amundsen’s voyage between 1903 and 1906. But most of those have gone through just in the last decade as ocean warming diminishes ice cover further, and for longer, during the summer months. Last August, the surface area of ice extending across the Arctic Circle was 30% less than 25 years ago, according to the Colorado-based National Snow and Ice Data Center.

With regard to DNA, the other day I wrote:


My favorite of the four [books I'm currently reading]: Sam Kean, The Violinist's Thumb, [a pop lit book on DNA]. He might be a bit flippant but overall it's really good. Before reading it, I would recommend reading a wiki entry on DNA, then James Watson's book on DNA; and then this book. The title is obviously a take-off on Stephen Jay Gould's The Panda's Thumb.

For folks who still have an open mind about global warming / climate change / extreme weather, I highly recommend chapter 10 in Sam Kean's book. It is an excellent chapter on how close Homo sapiens have come extinction over the millenia.

Kean writes about the Toba supereruption in a most fascinating way.
Posted by Bruce Oksol at 9:20 PM