Top energy story overnight? China's bid to take large stake in Rosneft fails. This speaks volumes about the state of China's economy. It would have been a big story -- but pretty much unreported -- had China acquired that stake in Rosneft. Instead, it's a big, big story. Link here. Data points:
Qatar: posted earlier this morning, this link to a Bloomberg story on Qatar and quest to become world's natural gas king. Data points:
Disclaimer: this is not an investment site. Do not make any investment, financial, job, travel or relationship decisions based on what you read here or what you think you may have read here.

Politics: could not have worked out better. The face of the US Congress: Maxine Powers and Nancy Pelosi.

Coal? I thought we had seen the last of coal in New England. But for the first time in a long time, I see "coal" back on the ISO New England charts. Link here: 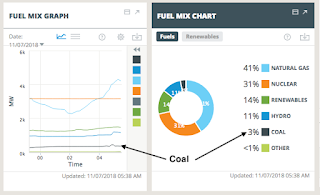 China: some nice data points in this article for the archives. Nothing that hasn't been said before.

Shale oil: for Art Berman. Nothing that hasn't been said before. Story over at oilprice.

Investing 101: MLPs. Again, story over at oilprice.
Posted by Bruce Oksol at 6:14 AM