All's Well That Ends Well -- Shakespeare's Philosophy On Drilling In The Bakken -- November 29, 2014

September 6, 2015: a reader sent two photos of the first at Flatland Federal #27522. The reader noted that one individual (a male) suffered burns but recovered fully. The Williston Herald story is here, with one of the two photos sent me. 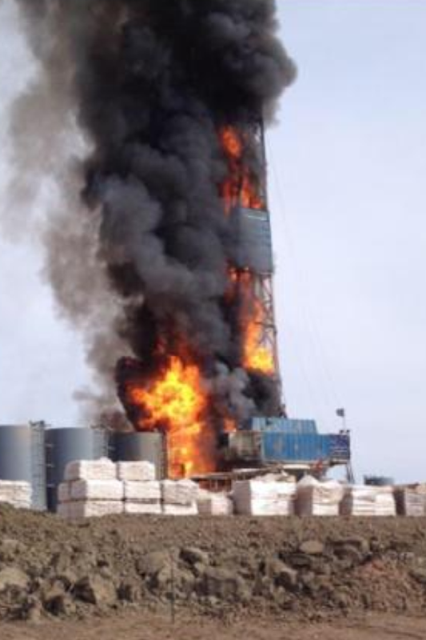 May 5, 2015: production numbers for these three wells have been updated through February, 2015.

And here's the third one:

From the well file for a Whiting well still on confidential, but some information had been previously released. From the Geologic Summary:


The Whiting Oil and Gas Corporation Flatland Federal 11-4TFHU is a Twin Valley field well ... the initial phase ... is a coring pilot hole, followed by a vertical and curve, landing in the Three Forks Cycle 2 formation.

So, how did things turn out?

The well is still on confidential; it should come off the confidential list April 7, 2015, but here is the scout ticket (you may want to be sitting down when you look at the first month production):

Gas in the upper Three Forks was unremarkable, ranging from 11 units to 724 units. However, in the target zone, in the Three Forks Cycle 2 target zone, gas ranged from 17 to 8,500 units while drilling and in excess of 9,500 units during trips.

Nabors B08 was deemed unfit to continue work and had to be cut apart and removed from location. I am hoping that no one was injured in the fire, but nothing was said. This well is the first of two wells drilled on this pad.

The permit application states this is a Three Forks B1 well on a 2560-acre spacing unit.

By the way, note the oil field: Twin Valley, where Whiting is setting some records with production. I track the Twin Valley oil field here.

For newbies, 44,111 bbls in the first month is huge, but it's not unprecedented for monthly production; here is what EOG has done as just one of many EOG examples.

By the way, this is what the first few months production of a Whiting record-setting well was in the same oil field, Twin Valley:

Being tweeted now:  'Journey for Justice' marchers pass St. Louis airport on 1st leg of 120-mile trek to state capital; the 7-day march is organized by the NAACP - @huyMach.

They could drive it in an hour and a half, and gasoline is really inexpensive now. I wonder if Al Sharpton will walk, ride, or helicopter?
Posted by Bruce Oksol at 8:33 PM