Three Words I Love To See In One Sentence Regarding The Bakken: Massively Increasing Production -- June 18, 2018

Readers may remember this post regarding Continental Resources from just five days ago, June 13, 2018: "all of CLR's optimized completions now exceed 1.1 million bbls EUR type curves." I don't know if folks realize how incredible that data point is. 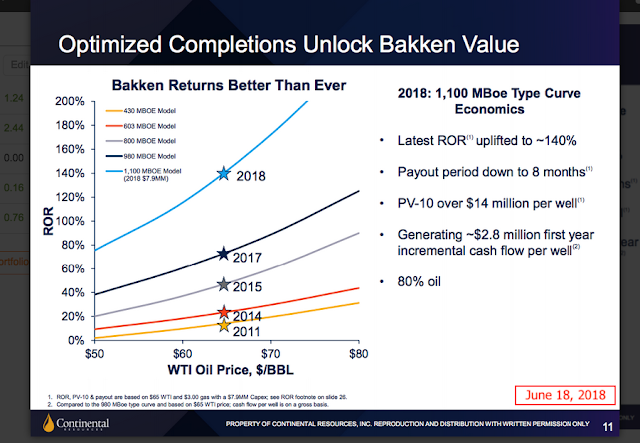 Apparently someone does. From a contributor over at SeekingAlpha:

So let's see what Leo Nelissen has to say.


The most recent investor update from Continental Resources provides an amazing overview for investors. The presentation is very unbiased given that almost everything was based on simple facts and numbers. However, the biggest variable is the oil price which is influencing many ratios/indicators.

Annual free cash flow is one of those indicators. Until 2015, free cash flow had been negative due to massive outspend and investments with oil prices close to $100 per barrel. In 2016, free cash flow started to bottom along with the oil price. Initially, this was mainly thanks to divestitures. However, over the next 6 months, it is expected that free cash flow will reach the $800-$900 million range supported by a higher oil price (based on $60 per barrel) and increased production of close to 300,000 barrels per day.

When it comes to profitability, the company mentions a rate of return of about 140% in the Bakken area. This can increase to 180% if oil goes above $70 again.