Energen has been in the news lately with Icahn and Corvex mulling a bid to buy the company. The question seems to be why EGN? There are a number of reasons why the company is attractive. The shares seem undervalued at current valuations.

This seems linked to EGN's recent production improvements per location. EGN is a Permian pure play, and has continued to improve production results. The Permian has the most valued acreage, but widening differentials are providing value in some names. EGN's well design changes have amped up production per foot.

Its Gen 3 Delaware frac' design uses 1,800 to 2,400 lbs./ft. of proppant. It has also decreased frac' cluster spacing. These changes have provided a significant improvement, and could continue to do so. Delaware well results continue to improve, and we think it should still be the focus going forward. EGN production improvements have been significant, and we believe this will continue in 2018. We pulled production results from 2016 and 2017. Improvements as a whole have been much better than the average Permian operator. It's Delaware acreage is improving faster than Midland. Locations already produce approximately 40% more oil per foot. EGN also has 85% of its production on pipe. It has hedged for differential protection. Approximately 72% of production is hedged this year.

Compare Energen's frack design in the Permian with that of the Bakken: 1,800 to 2,400 lbs/foot of proppant:
Also, look at this (previously posted), link here; EIA's monthly drilling productivity report -- 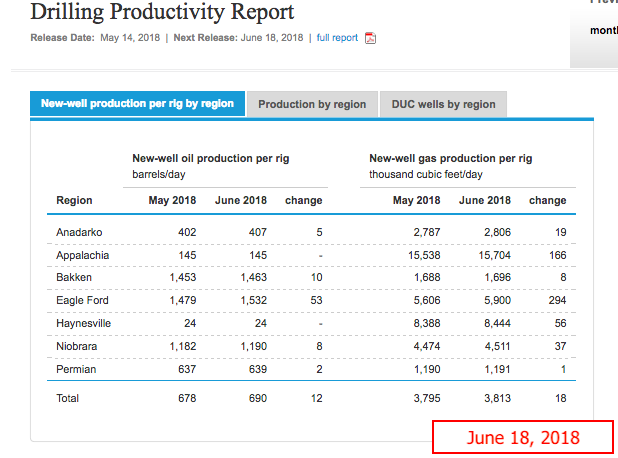 So, the Permian producers are using much more proppant / foot to get much less crude oil / well.

Disclaimer: this is not an investment site. Do not make any investment, financial, job, travel, or relationship decisions based on anything you read here or what you think you may have read here.