This will be re-posted later. This is a huge story. A H.U.G.E. story. 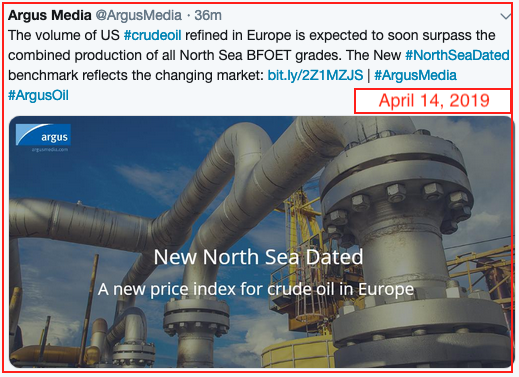 
The new price index is based on a robust methodology that combines the liquidity of the existing market for North Sea crudes with a range of delivered Rotterdam assessments of other crudes regularly consumed in Europe.

The North Sea market provides the price benchmark for much of the crude traded around the world, including exports from Russia, Africa, Latin America and the Middle East (to Europe) and deliveries into Asia.

The disruption to the Forties pipeline in late 2017 and the increasing removal of benchmark-grade Forties from the North Sea market for shipment to Asia has left the market appearing short, illiquid and volatile. However, there is a large and growing volume of similar light, sweet crude available to European refiners, especially from the US.

The market requires a regional European benchmark that reflects the new reality. Argus is the first to introduce a fully formed new methodology that builds on the strengths of the existing market, while incorporating new market reality. Today, delivered grades are just as likely to provide the clearing price signal.

As North Sea production declines and European refiners look for alternative sources of crude, the volume of US WTI crude refined in Europe (around 900,000 b/d) is expected to surpass the combined production of all North Sea BFOET grades (currently 910,000 b/d). US WTI crude is the most competitively priced light, sweet grade in the European market and should be part of the benchmark-setting process.

We also include other similar-quality grades that are regularly delivered to Europe — Saharan Blend, BTC Blend, Bonny Light, Escravos and Qua Iboe — to increase liquidity and allow for more participation in the benchmark-setting process.

Whether you love him, hate him, or somewhere in between, Trump "calls it" over and over and over:
The movie I'm watching suggests Trump is the first president in a long time to clearly state what he thinks will happen six months out, compared to most recent presidents simply reacting to events
Many Americans are watching a different movie than I am but that's what makes this interesting.

Wasn't there a headline the other day that US border patrol, homeland security, et al, picked up 100,000 illegal migrants in one month? That's hard to believe. I could be wrong, but probably not.

Now this headline: the second largest city in New Mexico, Las Cruces, is begging for help to handle all the migrants that are being dropped off in their city.

Remember, this is the second largest city in New Mexico.

This "huge" city is beginning to show signs of strain, that it cannot handle the influx.

The city says US border patrol is dropping off huge numbers of migrants in their city and they can't handle the surge.

So, how many migrants are we talking about?


The statement said 83 migrants arrived Saturday, following about 95 who were dropped off by the Border Patrol on Friday at the Gospel Rescue Mission homeless shelter and the Community of Hope campus.

First question to be asked? Is Las Cruces, NM, a sanctuary city?