September 16, 2018: I may have been wrong in the original post. It was my understanding the PSC was simply asking for a second set of eyes to confirm what they already thought  -- but The Oil Patch Hotline appears to say that the case is closed: the PSC does not have jurisdication:


Efforts by environmental groups to put the Meridian Energy Group refinery at Belfield under the jurisdiction of the ND Public Service Commission were thwarted by an administrative law judge.

The judge, Patrick Ward, early in September ruled that a complaint from the Dakota Resource Council and Environmental Law & Policy Center be dismissed.

Because Meridian changed its plans to reduce the refining capacity from 55,000 BOPD to 49,500 BOPD, the PSC no longer has jurisdiction, the company told Ward.

The ND Dept. of Health had also issued an air quality permit earlier this year for 55,000 BOPD.

“Meridian plans to construct the Davis Refinery 111 as a single phase with a capacity of 49,500 bpd,” said attorney Lawrence Bender. As a result, the Davis Refinery is not a "gas or liquid energy conversion facility", which is subject to the Siting Act under the jurisdiction of the PSC.

“Meridian is not required to obtain a certificate of site compatibility for the facility prior to construction, and the PSC cannot exercise jurisdiction over this matter,” Bender said.

The environmental groups wanted the PSC regulatory authority because the refinery would impact their “use and enjoyment” of Theodore Roosevelt National Park, which is only three miles from the refinery.

The judge's opinion is not binding but it provides the necessary "cover" the PUC needs before they vote.

Is it just me, or is this getting tedious?

And then this bit of garbage, some "yahoo" gives the Trump economy a "B."

What don't they want?

The article is here. The "yahoo" actually says some aspects of Jimmy Carter's economy were better than Trump's. That's when I quit reading.

I guess Rick Newman is a nominee for the 2018 Geico Rock Award. And will immediately go to the head of the pack.

The nominees for the 2018 Geico Rock Award can be found at this post. 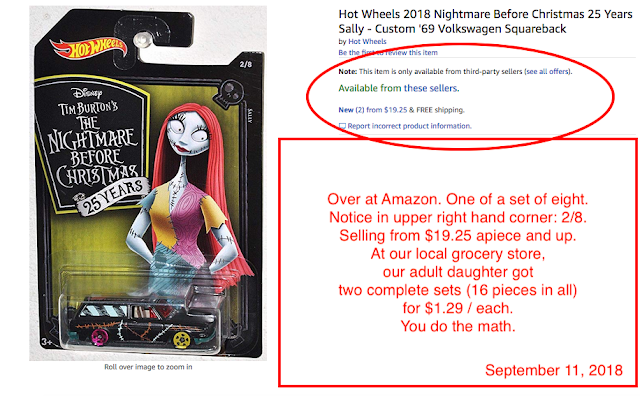 The only thing I can figure out: Texas retailers are incredibly fair. Or lots of competition. But if folks are willing to pay $12.95 (and up) for a toy that retails for less than $1.99, don't complain about the price of gasoline. Or the price of Starbucks coffee. Or the price of an iPhone X.
Posted by Bruce Oksol at 3:55 PM