Bloomberg here.
Hopefully there will enough renewable energy to make up the difference.

I'm not sure why Bloomberg (in the linked article above) did not include 2015 data (that data is over a year ago) and why no data for 2016 (even if somewhat "estimated"). It's possible the data in 2015 was not shown because in late 2014, OPEC scrapped all quotas. 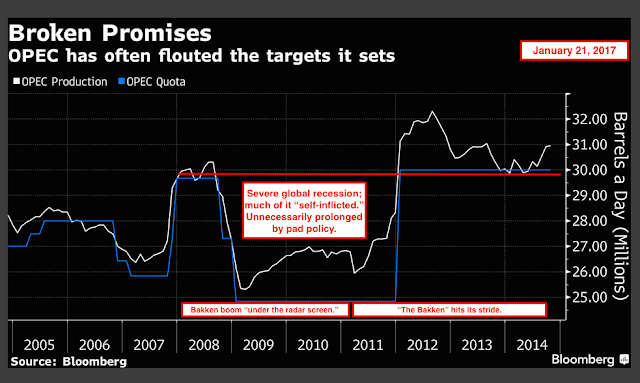 It is amazing, looking back on this graph, that "the code to crack the Bakken" was broken/discovered during the worse global recession since the "Great Depression."

On another note, my comments on "OPEC cheating."

Meannwhile, President Trump's energy plan is now posted at the White House website. Here is the take by Business Insider:


We must take advantage of the estimated $50 trillion in untapped shale, oil, and natural gas reserves.'

Or, more pithily said by a former talking head over at CNBC: drill, baby, brill.

Fox News did not re-sign George Will. Will lost his way some time ago.

In retrospect, Megyn made it easy for the network to transition.

This site will help you find out.

I will link it at the links page.
Posted by Bruce Oksol at 5:50 PM