John Kemp regularly posts modified EIA graphs to accompany the EIA's weekly petroleum reports. He may post as many as a dozen or so such graphs every week after the report is released.

Today I took particular note of four of his graphs.  The first three graphs have to do with gasoline, but to spread this out, one at a time.

In the second in a series of posts, here is my take on one of those four graphs. 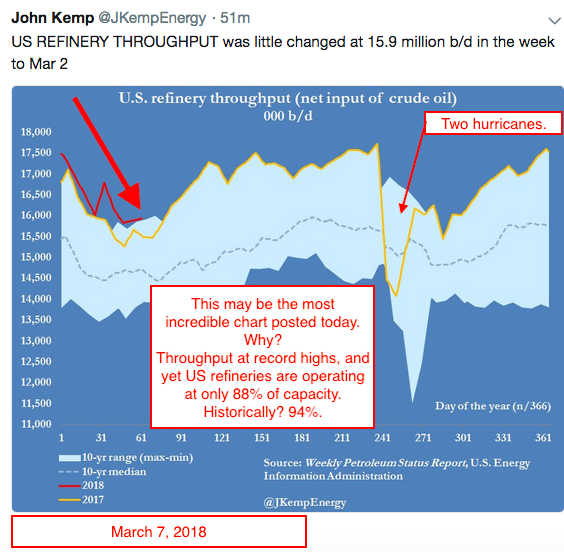 This is a most incredible graph.

This is why it is so incredible. Take a look at this graph -- gasoline production data.

In that graph, one can see that gasoline production is likely to test last year's record production.

This is why this graph is so incredible: US refiners are operating at 88% capacity (and, at least one refiner wants to expand operating capacity of the largest US refiner in the US).

I don't recall having ever read anything by William Faulkner and that's saying a lot. Starting back in 2000, I voraciously started reading, ultimately putting together a reading program of which I am quite proud. Going through my journals (literally scores of journals devoted to literature) I have nothing on Faulkner except a listing of the top 100 best English novels as compiled by Time Magazine critics Lev Grossman and Richard Lacayo back in 2009, from a list of novels dating back to 1923.

The list is alphabetical, not ranked in any order. Faulkner is on the list with Light in August and The Sound and the Fury.

It's time, I guess, for me to read a bit about, and perhaps read a bit of, William Faulkner.

I will start with William Faulkner: The Yoknapatawpha Country, Cleanth Brooks, c. 1963. The first thing I noted: what little I have read reminds me a lot of Rob Roy and Sir Walter Scott. Wow.

Nothing new under the sun.

I can't wait to really get into this book.