John Kemp regularly posts modified EIA graphs to accompany the EIA's weekly petroleum reports. He may post as many as a dozen or so such graphs every week after the report is released.

Today I took particular note of four of his graphs.  The first three graphs have to do with gasoline, but to spread this out, one at a time.

In the first in a series of posts, here is my take on one of those four graphs. 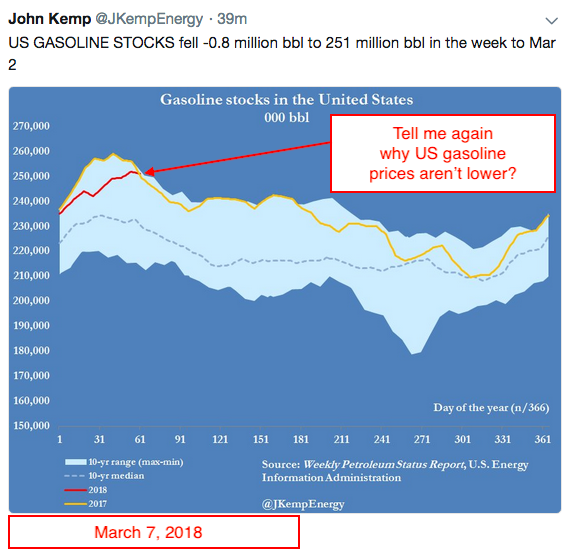 The graph says it all: tell me again why the price of gasoline in the US isn't falling more quickly (later we will see graphs that add even more "punch" to this question)? It looks like refiners cannot help themselves -- at the beginning of the year, refiners were providing gasoline at record levels and although it has fallen off its highs from last year (2017) production is back on track to test last year's record production.

Exports? Gasoline exports? A drop in the bucket. Exports don't explain the increase.

I'm back in my Roy Orbison phase, specifically his last (?) album, Mystery Girl.

I had noticed this before but one track from the album, "The Only One" is definitely a Muscle Shoals song.

It is difficult to find the dots connecting "Muscle Shoals" with "The Only One" but I think I have found it.

See Craig Wiseman and "Big Loud" at this link.
Posted by Bruce Oksol at 1:18 PM