March 16, 2020: Apache announces all drilling activity in the Permian will stop in light of the slump in oil prices.

January 8, 2017: the story behind the discovery of Alpine High. A must-read. From the article, these two graphics: 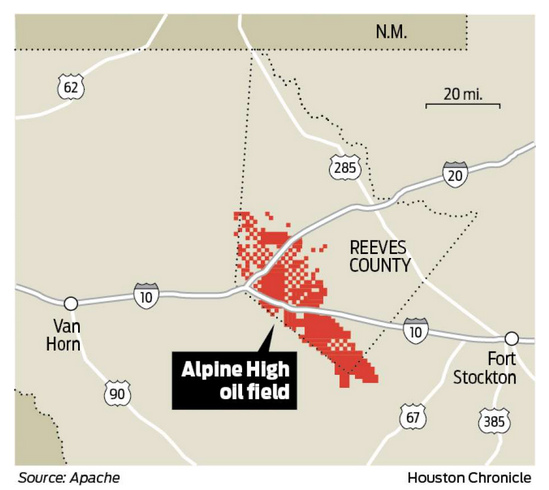 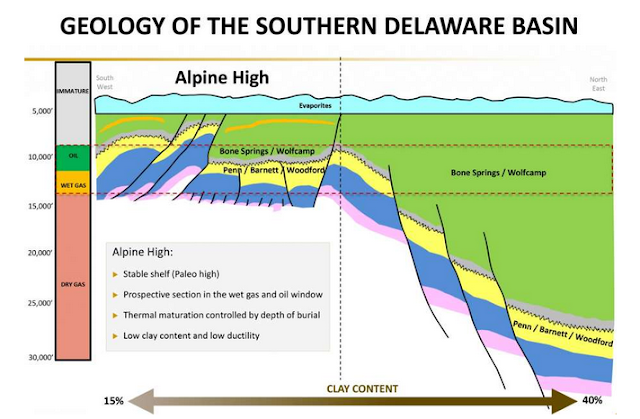 Later, 4:30 p.m. Central Time: to put this in perspective, in an earlier post following the announcement of "SCOOP," CLR said the SCOOP added about 1.8 billion boe to their reserves.


Apache did something old-fashioned on Wednesday that oil investors love: It said it had found more oil -- a lot more: 3 billion barrels. It has apparently also stumbled upon 75 trillion cubic feet of gas. [To get a feeling of what 75 trillion cubic feet "means," go to this site: http://themilliondollarway.blogspot.com/2016/06/random-update-of-marcellus-utica-june.html.]

The stock duly jumped, though investors shouldn't take those numbers at face value. Initial estimates of a field's potential usually err on the side of crazily optimistic. Rival Hess enjoyed a fillip in late June when it announced a big discovery off the coast of Guyana. On Tuesday, its stock slipped by 3.5 percent after it announced "disappointing" results from an exploration well there.

Still, if the Alpine High discovery in west Texas is anywhere close to what Apache cracks it up to be, then rival producers -- OPEC, say -- should be at least mildly concerned. And that's because, in one way, the slides about Alpine High in CEO John Christmann's presentation on Wednesday weren't even the most threatening ones.

See graphic at link for Saudi's biggest problem. This is the narrative:


The Permian basin's attractions are well known in the E&P sector -- just ask Blackstone or EOG Resources. As oil prices have collapsed, producers have slashed jobs, idled rigs and basically tried to do more with less. Part of that has involved focusing on the best acreage that can turn a profit, in cash terms anyway, even at lower oil prices. Hence the rush, or retreat, to the Permian.

What's interesting about Apache's slide, though, is the number that isn't on there: $10.

That's the difference between the two oil-price scenarios laid out, $50 and $60 a barrel. Christmann said Apache had 700 locations it could drill in that area that were "very economic at $50."

Bump the price to $60, though, and Apache reckons the number of viable locations jumps to anywhere between 2,450 and 3,200.

Wow, wow, and wow. Early this morning, well before the article linked above was posted, I mentioned that I'm completely content with $45 oil. In fact, I argue that the sweet spot for WTI pricing right now is $46 to $52. I used $60 as the high end of the sweet spot. I find it interesting that this Bloomberg article chose exactly the same numbers. Amazing.

And neither number helps Saudi all that much. Sixty-dollar-oil for Saudi Arabia is not much better than $50-oil when one's national budget calls for $100 oil, something we haven't seen for almost two years now. Oil today: up nicely today to $46.11. Right at the low end of the narrow sweet spot: $46 - $52 in today's dollars; current conditions. 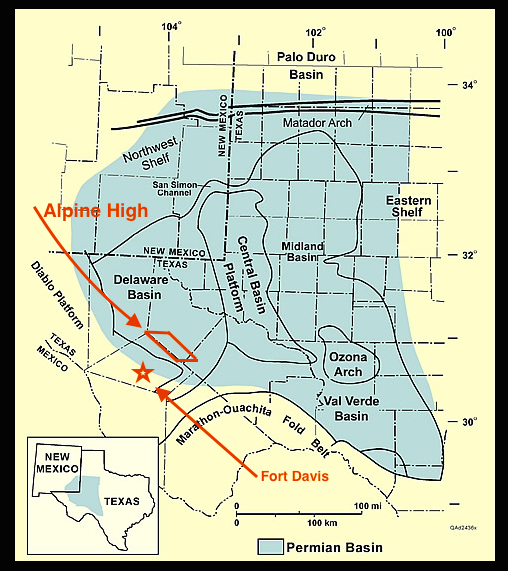 
Apache Corp.  said it has discovered the equivalent of at least two billion barrels of oil in a new west Texas field that has the promise to become one of the biggest energy finds of the past decade.

The discovery, which Apache is calling “Alpine High,” is in an area near the Davis Mountains that had been overlooked by geologists and engineers, who believed it would be a poor fit for hydraulic fracturing. It could be worth $8 billion by conservative estimates, or even 10 times more, according to the company. Shares rose by as much as 13% after U.S. markets opened Wednesday.

Apache started acquiring mineral rights in the area two years ago and subsequently discovered its potential. The company then quietly went about locking up more land in the field, believed to be up to 450,000 acres overall. Its position now exceeds 300,000 acres, or roughly two-thirds of the field, and is about 20 times the size of Manhattan.

The company has begun drilling in the area and says the early wells, which produce more natural gas than oil, are capable of providing at least a 30% profit margin at today’s prices, including all costs associated with drilling.


The discovery is likely to transform Apache, currently the nation’s sixth-largest independent energy company with a market capitalization of $20.1 billion. Alpine High may now be the biggest asset for Apache, known in the industry for its frugality and record of buying assets from other companies rather than finding its own.

Wow, wow, and wow. The Apple Event closed with one of the most interesting music videos I featured at the blog more than once. Had it not been for the blog, I would not have seen the original video nor connected it with the Apple Event today.

At the end of the day, with regard to the Apple Event, Apple has simply partnered with anyone and everyone that's important in the US. Except Amazon. Google. Facebook.
Posted by Bruce Oksol at 12:16 PM