Cheaper For East Coast Refiners To Get Oil From Urals Than North Dakota -- Reuters -- July 24, 2018 -- What's Wrong With This Picture?

Just twelve days ago I pondered aloud where the "Delta refinery" was getting its crude oil. Now we know. And it's a bizarre story to say the least.And so many story lines.


U.S. refiners will import a record monthly volume of crude from the Caspian region in July after snapping up the cargoes when prices reached near six-year lows, according to market sources and Thomson Reuters shipping data.

The unusually large volume of crude is one of many changes in the international oil trade caused by a flood of U.S. shale oil headed overseas. [Three million bopd.]

Record exports of crude from the United States to Europe and Asia have pushed down the price of comparable oil, such as the crude produced near the Caspian in Kazakhstan and Russia.

That oil is pumped through the CPC pipeline and loaded in the Mediterranean.

U.S. East Coast refiners, which rely on crude imports, have bought most of the 3.7 million barrels of CPC crude that will reach the United States in July.

The East Coast refiners have limited access to the oil produced in the shale fields hundreds of miles away in Texas or North Dakota. They buy additional crude from West Africa, Middle East and Europe.

That is because U.S. domestic shipping rules can make it more expensive for East Coast refiners to ship crude from the Gulf coast to the northeast than it is to import oil.

East Coast refiners "can get oil cheaper from the Urals than the Eagle Ford," said Kyle Cooper, a consultant for options broker Ion Energy.

Anyone who thinks they understand the oil industry better think again. 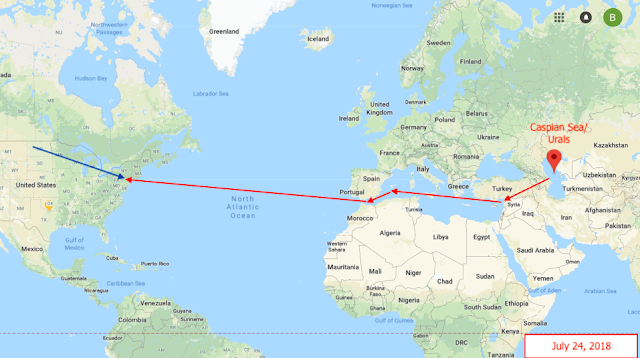 Email ThisBlogThis!Share to TwitterShare to FacebookShare to Pinterest
Labels: Refinery_Delta