This is what happens when one tries to fit a "good news" story that doesn't fit the narrative: a headline and a story completely out of whack with some incredibly bad writing.

This is the banner CNBC headline: consumer sentiment hits 95.1 in June vs 94.5 estimate. 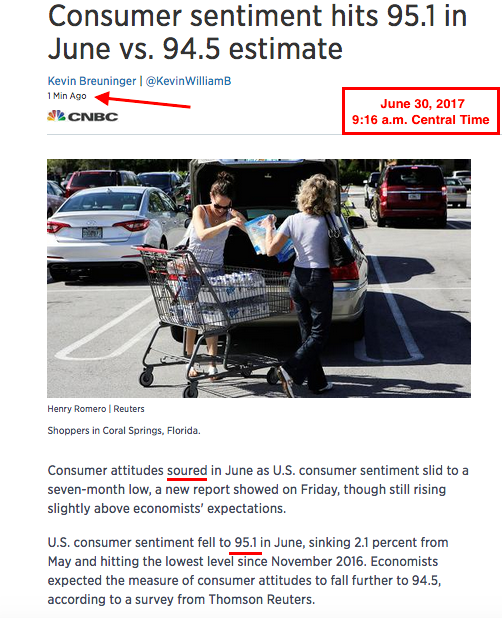 Regardless, there's little difference between 95.1 and 94.5% in this kind of poll. And in the last couple years of the Obama presidency, Consumer Sentiment Index struggled to stay at 90%.

Having said that, it appears that as soon as Trump became president, the index of consumer sentiment hit a 10-year high. Look how long it took the index to climb out of its hole under the Obama administration.

The implication of the linked CNBC story was that under the Trump administration, consumer confidence is souring.

Proof? Look at the lede:

I thought a consumer sentiment of 95.1% was outstanding. Let's look at the 10-year graph: 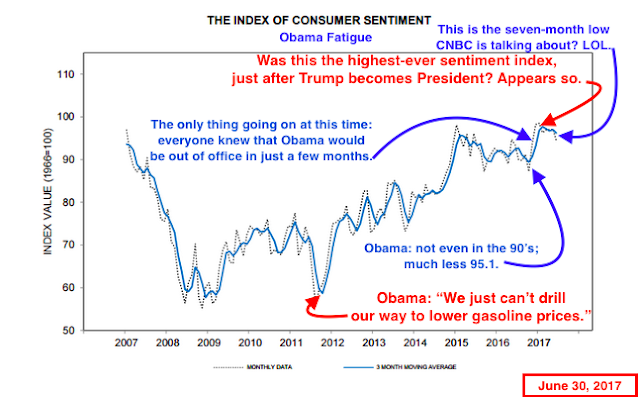 But if consumer sentiment is souring, it's due to two words: tax reform. As in "tax reform ain't gonna happen this year."

But 95.1% consumer sentiment seems to be an incredibly good number -- yes -- like a 10-year record. One wonders if previous number, current number, and the forecast are mathematically significantly different or even reproducible.

Enough of this. Fifteen minutes of my life I will never get back.
Posted by Bruce Oksol at 9:44 AM