China in deep doo-doo: will cut tariffs on $75 billion in US goods.

Iowa:
A quick scroll through my twitter feed:
SOTU:
Impeachment:
Most ridiculous "conclusion" so far today:
"fake news": this was the headline from EIA -- "despite the US becoming a net petroleum exporter, most regions were still net importers" -- so much wrong with that headline, LOL. Graphic: 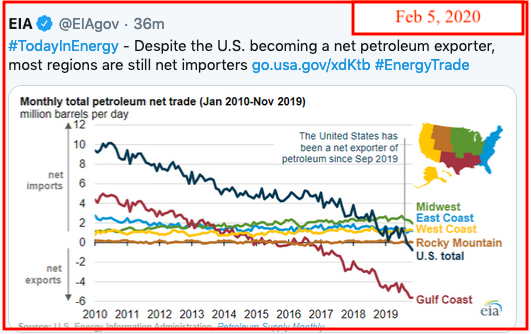 
Look past the headline. It's a decent article and has some important points to think about. (Plus I like the author, Mason Hamilton--check his Twitter.)

Landlubbers ignore the bicoastal nature of the US. But the Navy knows this well. Is in our DNA for PAC and LANT to be very different animals.

The distances for ships to respond in the 1898 war were behind the creation of the Panama Canal (damned Jimmy giveaway). But it's still very hard to move back and forth. And obviously carriers and crude tankers still go all the way around SA.

For oil, you have the West Coast being "an island" because of the lack of pipes connecting it to the middle of the country. HI literally is. And can't get crude from the Gulf, even with ships because of the Jones Act. Within that PADD, you used to have a lot of internal production (AK and CA), but both are way declined now. So imports make sense.

Then for the East, it's a little like the West. No crude pipes going over the Appalachians (one important products pipe, though). Shipping from the Gulf Coast would make huge sense but is not economic because of the Jones Act. So they import, while VLCCs head out from Houston but going much further away (export). The author also describes gasoline importing, which is sort of a classic story--basically US likes gasoline engines and Germany likes diesel. Refineries make both. But then Euros export gasoline and import diesel. And we do the opposite. That's the benefit of free trade! Get rid of stuff you don't need as much in exchanges with countries who have the reverse problem. (Donald, take note. Rand can explain it.)

The Rockies are a relatively small market and supply most of their own needs. Decent connections to middle of the country, but still not a huge deal. No point in importing.

Midwest gets a lot of Canadian crude, very price advantaged also. So makes sense to be an importer. Used to get PADD to PADD transfers from the Gulf up (imported). But those lines are now stopped and actually reversing. Capline reversal is a big deal.

Gulf PADD is exporting huge amounts of light sweet now, that are worth more overseas than here. Still has decent imports of sour medium/heavy. But even has backed out all light imports. And even the heavier imports are going down as they blend with less and less (but heavier) in order to mop up the US LTO as much as possible. And then, no need to import for transfer up toe Chicago any more either (as that is well supplied by Canadian crude and Bakken LTO).