Bernie: like thousands of Vermonters, we, too, have a lakeside cabin. From Snopes, and if it's from Snopes you know it has to be true:


Jane Sanders said she and her husband paid cash — $575,000 — for the four-bedroom summer house they recently bought in North Hero on the Lake Champlain shore. She said she sold her share of her family’s long-time vacation home in Bridgton, Maine, to her brother for $150,000, added some money from her retirement account and from an advance her husband got on a book he is writing to come up with the money to buy the couple’s third home.

After the UK leaves.

From the Daily [London] Mail, so you know the story will be good!

But it's even better than expected: Sweden -- birthplace of St Greta -- refuses to spend any more money to fight climate change.

Sweden's attitude: we will let Boris swelter in the land of no air conditioners. 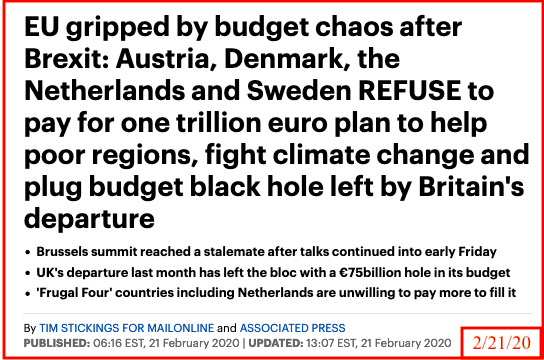 From the WSJ, by Jason Zweig:

Firms no longer want to offer investment products from all sources. Instead, they want to milk their customers’ cash and manage all the assets themselves. Investors need to understand the rules of the new game.

For decades, big banks and brokers aspired to become “financial supermarkets” where consumers could open bank accounts and buy stocks and bonds, mutual funds, insurance and the like.

On average, over the years, I made one trade/year.

Over the years, I gradually built up a dividend-focused, growth-focused equity account. Yes, growth and dividend (not value and dividend) and after thirty- forty years it's become a very nice account. The dividends alone would pay for living expenses for a year, if need be. When I started the account, I had few options, and 0.5% was not an issue. The portfolio has exceeded all my expectations. I still trade on average once/year. (Thank goodness I don't have automatic dividend reinvestment.) It now turns out that the 0.5% eliminates the entire dividend for one of the better dividend payers.

The trust department at the bank was simply acting as a bookkeeper and getting an incredible fee. A fee that would cover my annual mortgage (if I had a mortgage). And that was to make one trade/year.

As far as "choice" goes, about which Jason Zweig is so concerned, Schwab offers a gazillion ways to invest, including competitive money market accounts. And Schwab has so many non-Schwab partners, there is [practically] no limit on where/how to invest.

If one is only earning 0.3% in a "sweep" account at a brokerage (including Schwab)  you are doing it all wrong.

Yes, I'm closing that bank account and moving it to Schwab.
Posted by Bruce Oksol at 10:04 AM