Gasoline supplies have been sliding, probably in conjunction with the low refinery throughput you've been noting. But even with this week's big increase in the amount of oil being refined, gasoline output still fell by 136,000 barrels per day, after falling by 252,000 barrels per day the prior week.

Unfortunately, it's the wrong kind of oil. Thank you, Mr Obama.

EIA weekly petroleum report, link here. API reported a whopping increase of almost 8 million bbls of crude oil in its report yesterday.
The good news: WTI seems to be unaffected by the news.

And then, look at this. Why I love to blog. I have mentioned this numerous times -- the "false precision" -- now Z4 Research says the same thing: "no way EIA has this kind of granularity." Z4 Research is a gazillion times smarter than I am. Screenshot from Z4 Research over at twitter today: 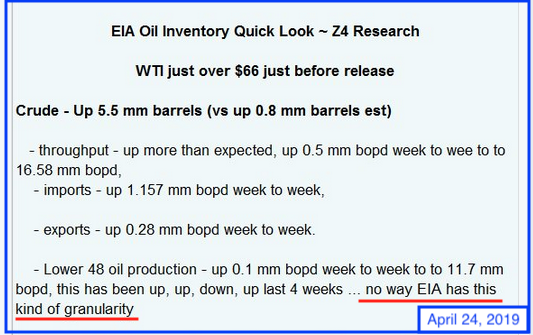 Re-balancing: remember, a couple of years ago "we" were shooting for 350 million bbls as the "definition" of re-balancing. Historically, 300 million bbls in inventory is just fine, and now we continue to trend upwards, and currently sit a modern record inventory of over 460 million bbls: