Covid-19 tracker here: Link at WSJ. Number of cases dropping like a rock now that Christmas surge is more than a month behind us. States leading the list for weekly new cases:

New York: for all the whining about how they're running out of vaccine, New York has used only 62% of their supply; North Dakota leads the nation at 85%. West Virginia ties North Dakota in today's report but lagged slightly behind ND yesterday.

Royal Dutch Shell raised its dividend despite reporting a plunge in annual earnings to the lowest in at least 15 years, as the oil industry reels from the effects of the pandemic. The company’s 2020 net income adjusted for one-off factors and cost of supply — Shell’s preferred profit measure and the one tracked most closely by analysts — fell 71 per cent to $4.8bn, from $16.5bn in 2019. That is the lowest since the company’s creation in 2005 through the unification of Royal Dutch and Shell Transport. The Anglo-Dutch oil major reported an annual loss of $21.7bn, a number that reflected a hefty post-tax impairment figure as Shell reassessed long-term energy prices and asset values in light of the coronavirus crisis and its strategy for the energy transition. That was the company’s first-ever headline loss and one of the biggest in the UK’s recent corporate history.

Even though cash flow fell 40 per cent against a year earlier and net debt rose to $75.4bn from the prior three months, Shell decided to raise its dividend for a second time in recent months. A dramatic two-thirds cut to the payout last April to 16 cents, the first since the second world war, was met with shareholder ire and the company’s share price dropped to a multi-decade low later in the year. As Shell sought to woo back investors, it raised the payout to 16.65 cents in October and has said it will again raise the dividend by 4 per cent to 17.35 cents a share in the first quarter of 2021.

I was one of those shareholders. Sold my Shell as soon as the dividend was cut last April, 2020. Dividend still pales to what it was.

I just sent a note to a reader: once I start seeing truck stops put in charging stations for E-trucks I'll start to believe the story.

I guess it's time to start believing the story. 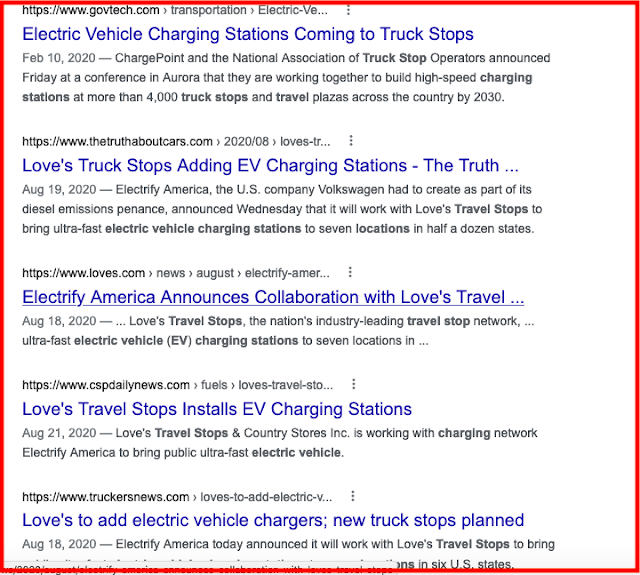 Porsche is no stranger to setting new records with the Taycan. In 2019, the electric sports car was crowned the fastest four-door electric car at the Nurburgring with a time of seven minutes and 42 seconds. More recently, the Taycan performed the world's longest drift, sustaining a slide for 55 minutes. And now Porsche can add another 13 new records to its long list of achievements.