Austin and Texas: thrilled that AOC doesn't live here. As it was, a lot of folks from Austin, TX, said they were against it, at least according to reports. I don't know. I don't live there; seldom visit; and, don't have a dog in this fight. But having said that .... woo-hoo! 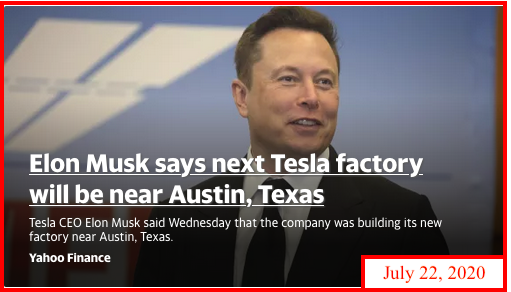 No longer a California company.


In one of the largest economic development projects in Austin’s history, electric automaker Tesla says it will build a $1.1 billion assembly plant in Travis County that will employ 5,000 people.

Wages at the factory — to be located on 2,100 acres off Texas 130 and Harold Green Road — will start at $35,000 annually, counting benefits, bringing job opportunities and investment to a southeastern portion of the county that officials say is sorely in need of them.

It will produce the electric vehicle maker’s upcoming Cybertruck electric pickup, as well as be a second site to build its Model Y SUV. Tesla officials previously have said they intend to break ground on the factory by the third quarter of this year, although CEO Elon Musk said Wednesday that initial work at the site actually began last weekend.