I have edited my original note regarding this subject. My position has not changed, but after receiving correspondence from reader(s), I thought it best to remove the "emotional" component of my original note.


This is the #1 reason why I was disappointed to learn that the Williston school bond issue was defeated. 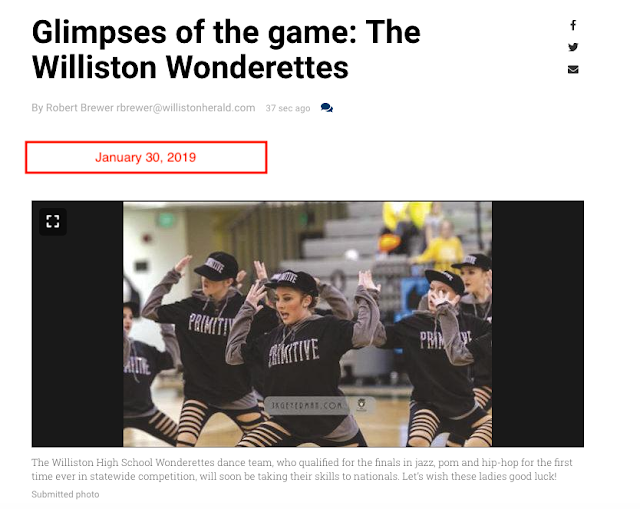 The faint print in the caption: "The Williston High School Wonderettes dance team, who qualified for the finals in jazz, pom, and hip-hop for the first time ever in statewide competition, will soon be taking their skills to nationals. Let's wish these ladies good luck!"

Someone asked me about "g-technology.


G-Technology is a brand of external storage products designed and marketed for the Macintosh, creative pro, photography and A/V markets. Its USB, FireWire, eSATA, SAS, SCSI Thunderbolt, and Fibre Channel systems support all levels of audio/video production. It is owned by HGST, a subsidiary of Western Digital.


IEEE 1394 is an interface standard for a serial bus for high-speed communications and isochronous real-time data transfer. It was developed in the late 1980s and early 1990s by Apple, which called it FireWire.

The 1394 interface is also known by the brands i.LINK (Sony), and Lynx (Texas Instruments).

The copper cable it uses in its most common implementation can be up to 15 ft long.

Power is also carried over this cable, allowing devices with moderate power requirements to operate without a separate power supply.

FireWire is also available in Cat 5 and optical fiber versions. The 1394 interface is comparable to USB, though USB requires a master controller and has greater market share.

From Genius: The Life and Science of Richard Feynman, James Gleick, c. 1992.

In 1948, the world's top physicists met in Pocono, Pennsylvania.

At the time, they had built "the bomb" but they did not understand the physics. The mass of the electron was unknown. A quick glance gave a reasonable number but a hard look gave infinity -- nonsense. The very idea of mass was unsettled: mass was not exactly "stuff," but it was not exactly "energy," either.

As the Pocono meeting began, Oppenheimer had reached the peak of his public glory, having risen as hero of the atomic bomb project and not yet having fallen as the antihero of hte 1950s security trials.

He was the meeting's nominal chairman, but more accomplished physicists were scattered about the room:

Niels Bohr, the father of the quantum theory, on hand from his institute in Denmark; Enrico Fermi, creator of the nuclear chain reaction, from his laboratory in Chicago; Paul A. M. Dirac, the British theorist whose famous equation for the electron had helped set the stage for the present crisis.

It went without saying that they were Nobel laureates; apart from Oppenheimer almost everyone in the room either had won or would win this honor. A few Europeans were absent, as was Albert Einstein, settling into his statesmanlike retirement, but with these exceptions the Pocono conclave represented the whole priesthood of modern physics.