Just some of the highlights.

Support grows for widening US Highway 85 to four lanes from Belfield to Watford City, or from Watford City to Belfield, if going in the other direction.

The draft environmental impact statement for the 62-mile project formed the basis of the public hearings. The groups discussed social, cultural and natural elements of the project such as displaced businesses or homes, impact on historic monuments, wildlife and recreation trails.

The Watford City meeting focused heavily on the route through the Badlands, the impact on the North Unit of the Theodore Roosevelt National Park, and the bridge over the Little Missouri River. There was no opposition to replacing the bridge, though some at the meeting asked about adding the existing bridge to a recreation trail connecting the Maah Daah Hey Trail to Watford City. That option has been ruled out.

A public-private partnership aimed at developing innovative methods of detecting and preventing pipeline leaks will begin this summer in North Dakota.

Western counties in North Dakota: drought declaration. This week US Agricultural Secretary Sonny Perdue placed 21 counties in a disaster area. The declaration means farmers in the affected areas qualify for federal assistance. One kind of wonders if the Obama administration would have been so accommodating.

Can the Bakken teach the Permian some lessons? More than 1200 miles separate Midland Texas from Williston North Dakota. But the two towns are incredibly similar. "We can always learn from the mistakes and successes of other communities. That's why it was critical for us to come out here and collaborate," says Midland City Councilman J. Ross Lacy.  Facing low unemployment, a strong oil industry, and a growing population, Midland,Texas mirrors Williston in many ways.

Downtown Williston: It's been close to a year since the historic Hedderich's Building caught on fire and now contracted crews are working to remove what's left. The demolition process began in the past two weeks with crews removing part of the basement floor and stripping parts of the sidewalk. Attention is now being turned how to use that new-found space.

Highway construction season begins. It is often said that North Dakota has two seasons, winter and construction, and right now, the latter is the season underway Williston. A variety of city, county and state road projects are scattered all over Williams County. Williston's 1-cent sales tax for infrastructure, which voters recently decided to continue, has allowed the city to take on an ambitious slate of projects over the years, and 2018 is no different. As far as dollars go, East Dakota Parkway reconstruction is the largest item on the ticket.

North Dakota economy. The link embedded in the screen shot: http://theinscribermag.com/which-state-offers-the-best-economic-prospects/. [Note: that link seems not to work any more, and there is nothing to suggest that North Dakota's GDP is 7.36% after I searched many other sites.] 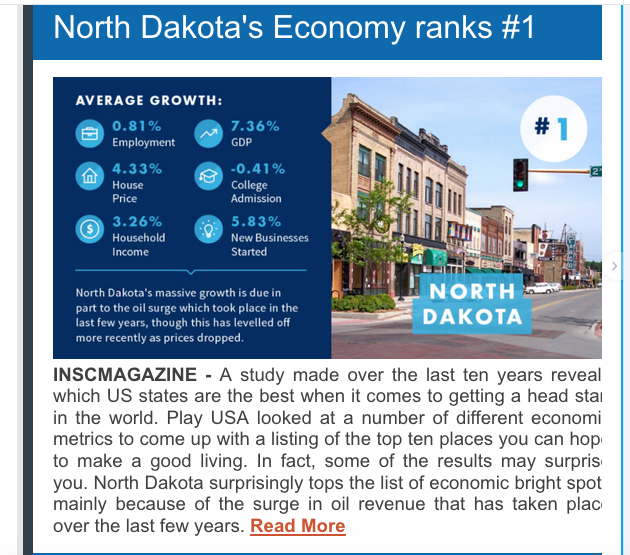