It is native to most of the southern half of North America. Populations in the eastern United States are probably naturalized. It has also been introduced to Europe, Australia, and other areas. The plant is fast-growing and highly competitive.

The leaves, stems and seeds of Palmer amaranth, like those of other amaranths, are edible and highly nutritious. Palmer amaranth was once widely cultivated and eaten by Native Americans across North America, both for its abundant seeds and as a cooked or dried green vegetable. Other related Amaranthus species have been grown as crops for their greens and seeds for thousands of years in Mexico, South America, the Caribbean, Africa, India, and China.

The plant can be toxic to livestock animals due to the presence of nitrates in the leaves. Palmer amaranth has a tendency to absorb excess soil nitrogen, and if grown in overly fertilized soils, it can contain excessive levels of nitrates, even for humans. Like spinach and many other leafy greens, amaranth leaves also contain oxalic acid, which can be harmful to individuals with kidney problems if consumed in excess.

Because of its toxicity to livestock, and scarce familiarity in the United States with the uses of amaranths as food, Palmer amaranth is rarely consumed nowadays, despite its ubiquity and resistance to drought. Unlike the grain and leaf amaranths of other regions, it has not been cultivated or further improved by recent agricultural breeding.

As a result, the primary economic importance of Palmer amaranth to American farmers has been as a noxious weed and a competitor to more marketable crops, rather than as a crop in its own right.

And the connection to North Dakota?

In 2015, Palmer amaranth was chosen as "weed-of-the-year" for the second year in a row as a "proactive approach to prevent Palmer amaranth establishment in North Dakota." Link. 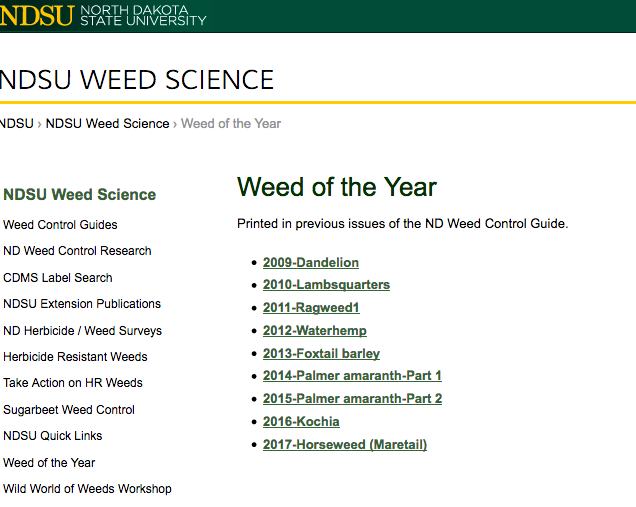 Oregon's weed of the year: marijuana.

Colorado's weed of the year: marijuana.

California's weed of the year: marijuana.

Alabama's weed of the year: kudzu.
Posted by Bruce Oksol at 7:56 AM