April 30, 2017, T+100: slowest growth in three years. Obviously the culmination of eight years of Obama. One doesn't turn the US economy around in three months. This is Obama's final grade in economics: a failing grade -- slowest growth in three years. And if I recall correctly, Obama was the first American president in modern history to never have a year of 3% growth, or something to that effect.

April 27, 2017, T+97: last cabinet nominee finally confirmed by the US Senate. Will be sworn in on T+97. Cognitive dissonance: people upset that rapists and murderers go free, but same people support sanctuary cities.

April 26, 2017, T+96: Trump rally continues; three days in a row. Although today, the third day, could go either way. Up as much as 60 points, near the close, up only 14 points or so. Trump releases his budget plan -- cuts taxes for everyone across the board and Chuck Schumer is upset.

April 25, 2017, T+95: O'Reilly? O'Reilly who? Tucker will easily beat him over time. [Update: how incredibly "funny": fired from Fox due to allegations of sexual impropriety. LOL.]

April 22, 2017, T+92: President Trump announces he won't be attending the White House Correspondents' Dinner. Instead he will host a "huge" rally in Philadelphia.

April 21, 2017, T+91: Senator Chuck Schumer's anti-Trump stance will put huge New York City infrastructure projects at risk. No wonder he has been so quiet lately, just as Trump is getting ready to release his budget.

April 18, 2017, T+88 (posted April 16, 2017): we still have a few weeks to go, but if nothing "important" happens in NOKO over the next few weeks, the most under-reported story since the Cold War, going back to the Cuban missile crisis, will be NOKO blinking, Trump "winning." Reading the mainstream media, one does not get the feeling that journalists are reporting how incredibly dangerous the past 72 hours has been. The events over the past week-end, or should we say the "non-events" over the past week-end could be a watershed moment in the relationship between China and the US, and the relationship between China and NOKO.

April 14, 2017, T+84: as long as the Democrats continue to argue that "Trump did not win," the situation for the Dems will grow even worse. It reminds me of Germany's decision to ban "Jewish science" in the late 1930s. Or Stalin banning Darwinian genetics.

April 13, 2017, T+83: now, beyond any doubt, the Obama administration "spied" on the Trump campaign using a FISA warrant to wire-tap phones.

April 11, 2017, T+81: Jared Kushner who has been put in charge of everything, apparently, by his father-in-law, is going to have his hands full overseeing two wars -- one in the Mideast and one on the Korean peninsula.

April 9, 2017, T+79: Donald Trump may be a braggart; may misuse words ("tapping phones" instead of "surveillance) (but using these words the way many Americans use these words); and, may use a  lot of hyperbole, but a) he keeps his word; and, b) does not lie, unlike Bill and Hillary; Donna Brazile, and Susan Rice -- who have been caught in outright lies -- and who lie and lie repeatedly. Trump: not one outright lie.

April 8, 2017, T+78: someday we will all know that Obama was a really, really bad dude. Connecting the dots -- Susan Rice, direct to Barack. On another note: Syria uses chemical weapons (nerve gas) on children and babies); the US knocks out the Syrian chemical weapons depot (at least the capability to access them); and, The Los Angeles Times leads with this photograph: 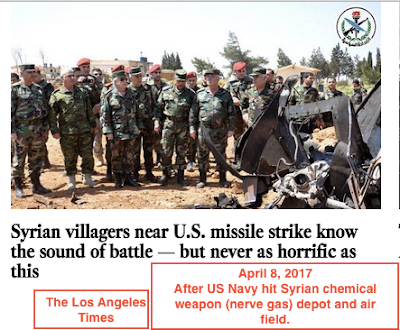 April 6, 2017, T+76: alt-left complaining that Trump's son-in-law working in administration, while defending JFK and RFK. Meanwhile, Trump launches 59 Tomahawk missiles into Syria after chemical attack on his own people. Something tells me Trump enjoys being president. It's very possible Trump will be seen by historians as the first neo-20th century president. Not Bush II; not Obama. Trump. Too many presidents in modern history have simply seemed no more than first among equals among those in Washington. Trump looks "presidential," a "real" branch of the US government, not part of the legislative branch of the US government.

April 5, 2017, T+75: alt-left complaining that Trump's cabinet secretaries are doing yeoman work despite fact that deputies have not been confirmed. Well, duh!

April 4, 2017, T+74: The alt-left really can't have it both ways, can they? On the east coast they say Trump has not accomplished anything in his first 67 days, and yet on the west coast they say all the new policies set in place in the first 67 days have completely undone the Obama agenda. Likewise, under the Obama administration, the nation's debt for the alt-left was a non-issue; now, all a sudden the nation's debt is driving the alt-left nuts.

April 3, 2017, T+73: is it just me, or does it appear the mainstream media is surprised that Ivanka and Jared are quite wealthy?

April 2, 2017, T+72: for now, anti-Trump folks seem to fall into three categories: cupcakes, fruitcakes, snowflakes. And then there are the Schumites, I suppose.

April 1, 2017, T+71: everyday I wake up happy knowing that Michell is not the First Lady. Although I wish I had my own garden.

March 31, 2017, T+70: Most Americans will never know, never realize how with regard to the US economy how incredibly dangerous the Obama administration had become, and how incredibly important it was that Hillary was not the third Obama term. As Bill Clinton always said, trust the American voter.

March 29, 2017, T+68: Is it just me or has anyone else noticed how quickly the story died when it was finally "proved" that, yes, indeed, the NSA "wiretapped" POETUS Trump and his family beginning the day after the election? Neither the mainstream media nor the politicians even care about this story any more.

March 28, 2017, T+67: President Trump needs to pull Mitch McConnell into the Oval Office and read him the riot act: if Gorsuch confirmation is not brought to the Senate floor by .......(you fill in the date) .... Trump will pull Gorsuch's nomination and nominate someone even Chuck Schumer will support.

March 26, 2017, T+65: the mainstream media is mis-reading the meaning of the "defeat" of the Ryan-Trump Healthcare Bill. This was an extremely important "win" for Trump, though that might not be obvious yet.

March 24, 2017, T+63: with the Gorsuch hearings yet to play out, the GOP still hasn't figured out it's being slow-rolled by the alt-left.

March 23, 2017, T+62: US House Intelligence Committee confirms what Trump has said all along -- Trump and his family were under surveillance following November's election. "The surveillance appears to have been legal, incidental collection and that it does not appear to have been related to concerns over collusion with Russia." 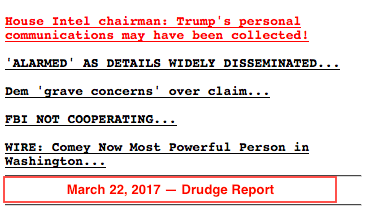